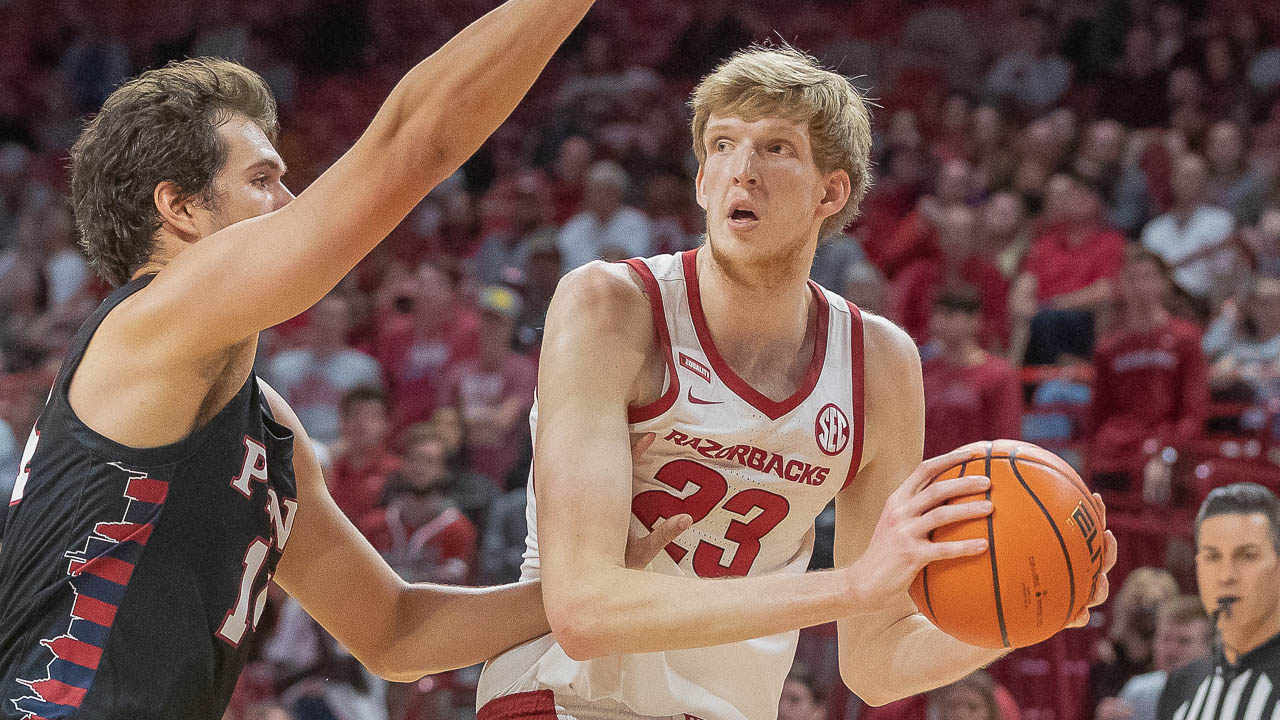 As a redshirt junior, he appeared in 15 games with 10 starts for the Razorbacks this season and averaged 3.9 points per game and 2.1 rebounds per game.

Vanover is the latest to explore his options in the portal, joining Chance Moore and KK Robinson. He announced the decision on his Instagram account Wednesday morning.

Vanover spent his freshman season at California before transferring to the Hogs.

Named to the 2021 SEC Winter Academic Honor Roll … Played in 29 games with 27 starts … Ranked 5th SEC / 35th NCAA in blocked shots (1.82) and was 26th in NCAA / 3rd SEC in total blocked shots (51) … 1 of 3 players in the NCAA to have at least 50 blocked shots and 20 3-pointers made … In fact, Vanover the first Arkansas player with 50+ blocks and 20+ 3’s made in a season and only nine other Hogs have reached those levels in an entire career (HogStats.com) … Only missed one free throw for the season (his 20th attempt) and was 20-of-21 for the season … Over the last 10 regular-season games, had 25 blocked shots (2.5 avg.) and he shot 36% (9–of-25) from 3-point range over the final 11 regular-season games … In his Razorback debut versus Mississippi Valley State, had a game-high 23 points — one shy of his career high — and tied a then career-high with eight rebounds … Drained 4-of-5 from 3-point range and added three blocked shots … 23 points ties for third-best production by a Razorback in his debut since 1980 … Only scored six points versus North Texas, but had a career-high 16 rebounds and tied his career-high with six blocked shots … Only Razorback on record to have as many as 16 rebounds and six blocked shots in a game … Only SEC player to have 16 and 6 since in a game since Kentucky’s Anthony Davis had 16 and 6 (ironically with just six points too) in the 2012 national championship game … Scored 12 points in just 12 minutes versus UT Arlington, making 5-of-6 shots, including 2-of-3 from 3-point range … Was just 2-of-8 from the field (all 3-pointers) versus Lipscomb but had a game-high nine rebounds with four blocked shots in just 15 minutes played … Only scored three points vs Southern (a 3-pointer) but had nine rebounds (all defensive) with three blocked shots and a career-high three steals … Had his second carer double-digit rebound game with 10 versus Central Arkansas (nine defensive) … Added nine points and two blocked shots … Pumped in 17 points, making 6-of-6 from the free throw line, at Auburn with five rebounds … Contributed 12 points and seven rebounds at Tennessee, making 5-of-9 FG and 1-of-3 3PT … In the win vs Ole Miss, only scored eight points, but effected the game in may ways … Had a team-best seven rebounds (only had 10 in previous five games) and blocked five shots (only had five in his previous 10 games) … Played all 20 minutes of the second half and 28:45 for the game (only played 40 total minutes his previous five games including 18 at Vandy) … For the second straight game, had five blocked shots (all in the second half) at Oklahoma State … Led Arkansas with 13 points versus Mississippi State, adding eight rebounds, three blocked shots and two steals … Played all 20 minutes of the second half versus the Bulldogs with 11 points, six boards, both steals and all three blocked shots … Made four field goals and scored 12 points at Kentucky … Sank 2-of-4 3-pointers and had two dunks … Snapped an eight-game streak with no free throws by going 2-of-2 … Recorded two blocked shots … Had 12 points and two blocked shots at Missouri … Struggled early (zero stats in 4:07 playing time in the first half) … Played 18:26 of the second half and scored all 12 of his points (5-of-6 shooting overall and 2-of-3 from 3-point range) with two assists … Served as a strong presence in the middle at South Carolina with six rebounds and four blocked shots.

Sat out the season per NCAA transfer rules … Named to the 2019-20 SEC First-Year Academic Honor Roll.

Averaged 7.5 points and 3.0 rebounds during his freshman campaign … Played 28 games and started 15 … Came on strong to end the season as he averaged 12.8 points and 5.0 rebounds over his final 10 games … Included in the 10-game span was a career-high 24 points versus Stanford and eight boards against Southern California … Led the team with 35 blocked shots and shot 35.5 percent from 3-point range (27-of-76).

Began his high school career at Arkansas Baptist Prep before transferring to Findley (Nev.) Prep for his senior season … At Findley, he was a teammate of current Razorback Reggie Chaney and averaged 8.3 points, 7.3 rebounds, 2.5 assists in 1.3 steals. He helped the Pilots to a 32-5 record and a No. 26 national ranking … At Arkansas Baptist Prep, Vanover led the Eagles to a three-year record of 82-21 with three league crowns and back-to-back Arkansas Activities Association (AAA) Class 4A state titles (2016 and 2017) … Tallied more than 1,000 points, 700 rebounds and 300 blocks while being a two-time USA Today All-Arkansas selection (2016 and 2017), the 2016 Arkansas Class 4A State Tournament MVP and a three-time Arkansas 4A All-State pick (2015, 2016 and 2017) … Vanover was a member of Team USA’s U16 and U17 squads and captured a gold medal at the 2015 FIBA Americas U16 Championship in Argentina after averaging 3.8 points, 3.8 rebounds and 1.2 blocks in four games.

PERSONAL:
Born June 23, 1999, in Little Rock … Son of Chris and Robyn Vanover … His mother, the former Robyn Irwin, was a member of the University of Arkansas women’s basketball squad from 1986-89 and led the Razorbacks in blocked shots three times … Has two older brothers, twins Brandon and Justin. Brandon (7-0) played basketball at Central Arkansas and Justin (7-1) played saxophone with the Alabama Crimson Tide marching band … Majoring in communications.