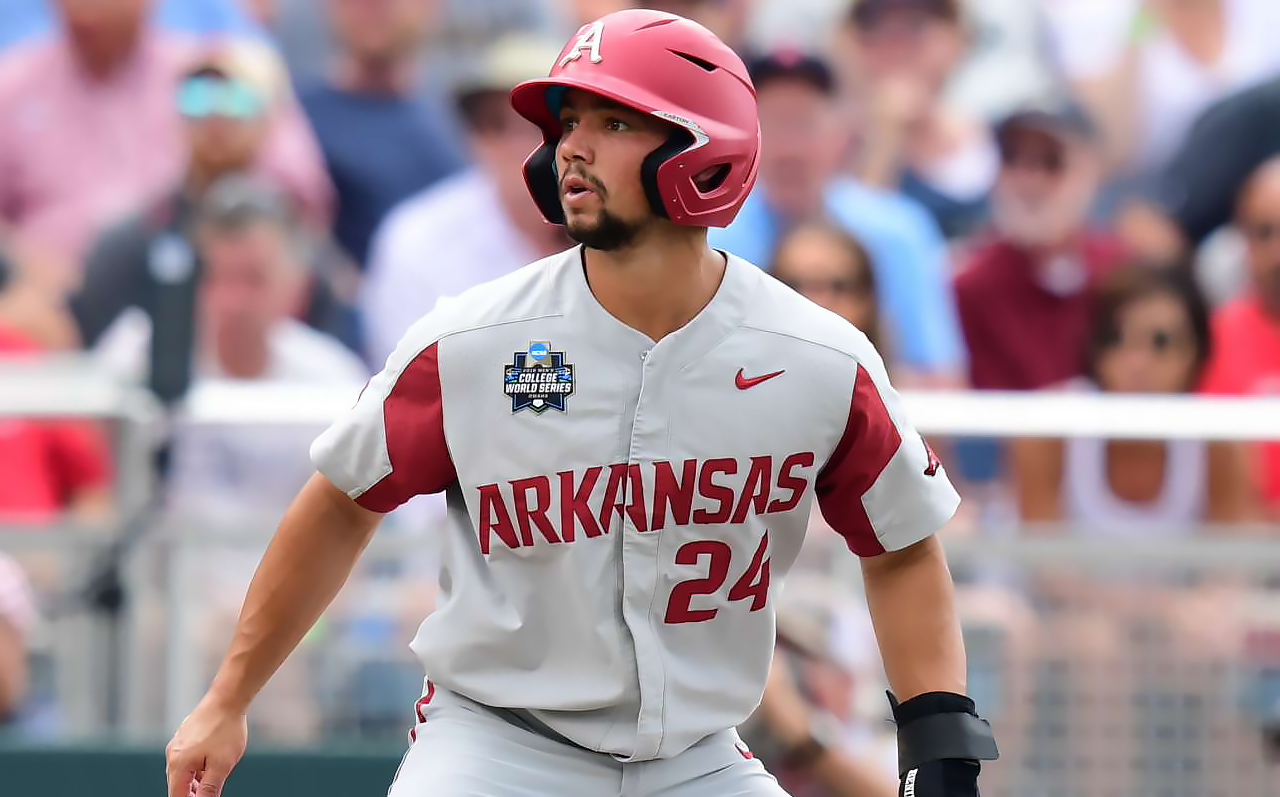 OMAHA, Neb. — Arkansas fell victim to the home run ball Monday and was eliminated from the College World Series by Texas Tech, 5-4, inside TD Ameritrade Park.

The Razorbacks’ appearance in the College World Series caps the program’s 10th trip to Omaha, and its sixth under coach Dave Van Horn.

Arkansas ends the season with a 46-20 record, tying for the second-most wins in a season under Van Horn.

Sophomore Heston Kjerstad jumpstarted the Hog offense with a solo opposite-field home run in the second inning, giving the Razorbacks their first run of this year’s CWS.

Kjerstad now has 17 home runs this year, which ties him for 10th most in a single season in Arkansas history. Kjerstad now has 31 home runs in his two-year Razorback career, just two shy of the top-10 of the Arkansas all-time list.

Casey Martin also put together his third multi-hit performance in his last five games, going 2-for-5 with a double and a triple.

He helped put together the two-run third inning with an RBI triple, his fourth three-bagger of the year, and later scored on an RBI single by Matt Goodheart.

The Razorbacks got a solid start from Connor Noland, as he worked four innings with just four hits allowed and one walk, but the two-run home run by Warren were the only runs he allowed.

It was Noland’s fifth outing in his last six that he pitched four or more innings and 14th where he walked one or less.

After taking a 3-0 lead after three innings and starting pitcher Connor Noland rolling through his first three frames, the Red Raiders started to chip away, starting with a two-run home run by Cameron Warren in the fourth inning.

That was followed by solo home runs by Easton Murrell and Josh Jung, marking the sixth time this year the Arkansas pitching staff has given up three or more home runs in a game.

Arkansas tied the game in the top of the eighth thanks to a sacrifice fly from Jack Kenley. Dominic Fletcher worked a full-count walk, then ended up on third behind a single from Kjerstad.

After five pitches fouled off, Kenley lifted a fly ball to left field and Fletcher raced home to knot the game up at four.

He gave way to lefthander Dane Haveman in the eighth, who gave up the tying run.

However, in the bottom half of the inning, Tech countered with a two-out walk to Warren and a triple to the gap in right-center field from Cody Masters, pushing the Red Raiders back on top, 5-4.

The Razorbacks threatened in the ninth, as Jacob Nesbit was hit by the third pitch he saw, then a single from Christian Franklin put two on with nobody out.

Unfortunately, the Red Raiders were able to leave the duo stranded on the bases to put an end to Arkansas’ run in the College World Series.

• Saturday marked the third time Arkansas and Texas Tech had squared off in postseason play.

It was the second-straight year the two teams have faced each other in the College World Series, with the Razorbacks picking up the win, 7-4, in the 1-0 game.

Overall in postseason play, Arkansas is 6-5 this season.

• Heston Kjerstad hit a solo home run to left field in the second inning, his 17th of the season and third this postseason. His other two homers came against Central Connecticut State (May 31) and Ole Miss (June 10), both solo shots.

• Casey Martin ripped an RBI triple to left field in the third inning, his fourth of the year and first this postseason. His triple was the first by an Arkansas player at the College World Series since 1989 (Jim Calhoon vs. North Carolina).

• With a single in the seventh inning, Trevor Ezell extended his hitting streak to nine games, including every game of the 2019 NCAA Tournament. This postseason, he is batting 17-of-37 (.315) with eight RBIs and eight runs scored.

• Casey Martin recorded his 26th multi-hit game behind a double and triple. He finished tied for the team-lead with Dominic Fletcher.

• Heston Kjerstad also posted two hits to move up to third this season in multi-hit performances with 24.

• Christian Franklin posted his 17th multi-hit game of the season after recording a pair of singles against the Red Raiders. He ranks seventh on the team in multi-hit performances this season. He was the only Razorback to have multi-hit games in both CWS contests.

“Well, obviously it was a tough loss. Pretty well-played game by both teams. For the most part, there really wasn’t too many mistakes. Just kind of who got the big hit and who didn’t. But just some big hits. Texas Tech took advantage of a couple of things, and tough loss, two tough losses here for us. Two one-run losses that really could have gone either way.” — Coach Dave Van Horn on the 5-4 loss to Texas Tech

“You know, just really proud of the team. Told them that after the game. Told them to walk out of there with their head high. We were real close to winning two games. We ended up losing two one-run games; kind of hard to swallow. But overall it was a really good year, getting a part of the Western Division championship and getting back here, just proud of them and appreciated the effort they gave us all year. Those guys showed up every day and worked hard, smiled a lot, and it made it fun to work with them. I just appreciate the effort.” — Van Horn on putting the season in perspective

“I thought we had an outstanding year, being counted out from the beginning. We bring in some new guys, Trevor Ezell did more than outstanding for us, and he’s a competitor. Without bringing guys in like that, true leaders for this team, I guess you just could say such a young team we have, that it shows these younger guys what it takes to get here. So they’ve experienced it now, and they know what it takes. We needed that, and I think we’ll be good if we can build off that.” — Casey Martin on how the year played out for Arkansas

“We had a spectacular year getting back here for the second year in a row, but it shows a lot about the incoming guys that came in and replaced a lot of the starters and experience we had from last season, and it took everyone on our whole roster to get us here, and it was just great to be back, and we’ll look back on the season and realize how good we were for the whole season, how good of an experience we had. But for now it’s obviously a little bitter once the season is over.” — Heston Kjerstad on the 2019 season for Arkansas