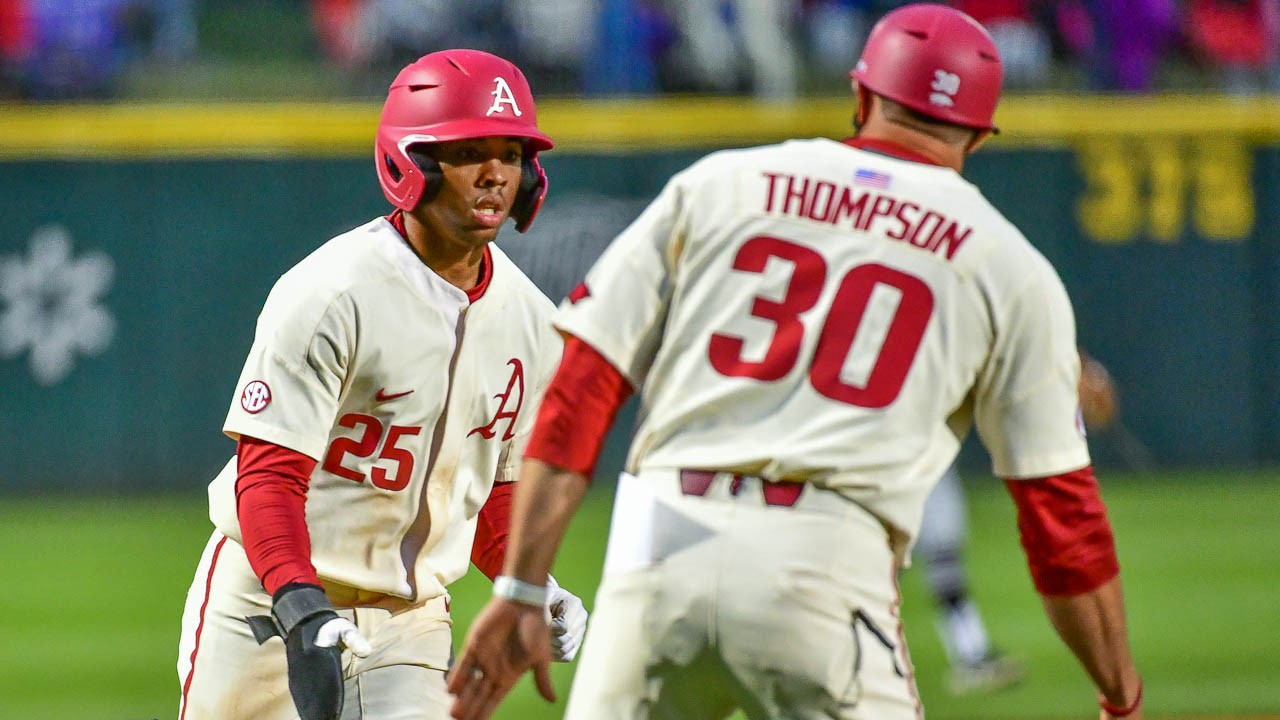 The Razorbacks notched season-high totals in hits and runs, with 21 and 20, respectively.

He finished 4-for-4 on the night with six RBIs, four runs scored, a walk and a hit by pitch.

Moore’s cycle was the first by a Razorback since Kyle Harris did it against Tennessee in 1994.

The Hogs scored in each of the first six innings, including two seven-run frames in the 4th and 6th innings, which opened up a double-digit lead before stretch time.

Junior shortstop Jalen Battles took the Bears deep twice in his first two at-bats of the night while designated hitter Charlie Welch, catcher Dylan Leach and Moore all added long balls, bringing Arkansas’s home-run count on the season to 45 and moving the Razorbacks into first place on the D1 home run leaderboard.

Relievers Caleb Bolden and Elijah Trest tag-teamed to finish the fifth inning and Trest handled the sixth, allowing the Razorback offense to extend the lead from six to 13 by the end of the sixth inning.

The visiting Bears were led by designated hitter A.J. Mendolia, who tallied a four-hit game with three RBIs on the night.

All nine Razorbacks in the starting lineup recorded at least one hit while eight knocked in at least one run.

Arkansas improved to 20-3 on the season and claimed the victory in the first ever meeting between Arkansas and UCA.

• Moore was the first Razorback to score four runs in a game since Trevor Ezell did against Arkansas-Pine Bluff in April of 2019.

• Moore was also the first Razorback to notch six RBIs in a game since Heston Kjerstad did it against Eastern Illinois to start the 2020 season.

• Arkansas had not scored 21 runs in a game since the 2016 season when the Razorbacks did so against Mississippi Valley State.

• The Hogs last recorded 20 hits in a matchup against Dayton in February of 2018.

• The last time Arkansas hit five long balls in a game was against Texas A&M in May of 2019.

The Razorbacks will resume conference play in a three-game series against Auburn starting Thursday night at 6:30 at Baum-Walker Stadium.