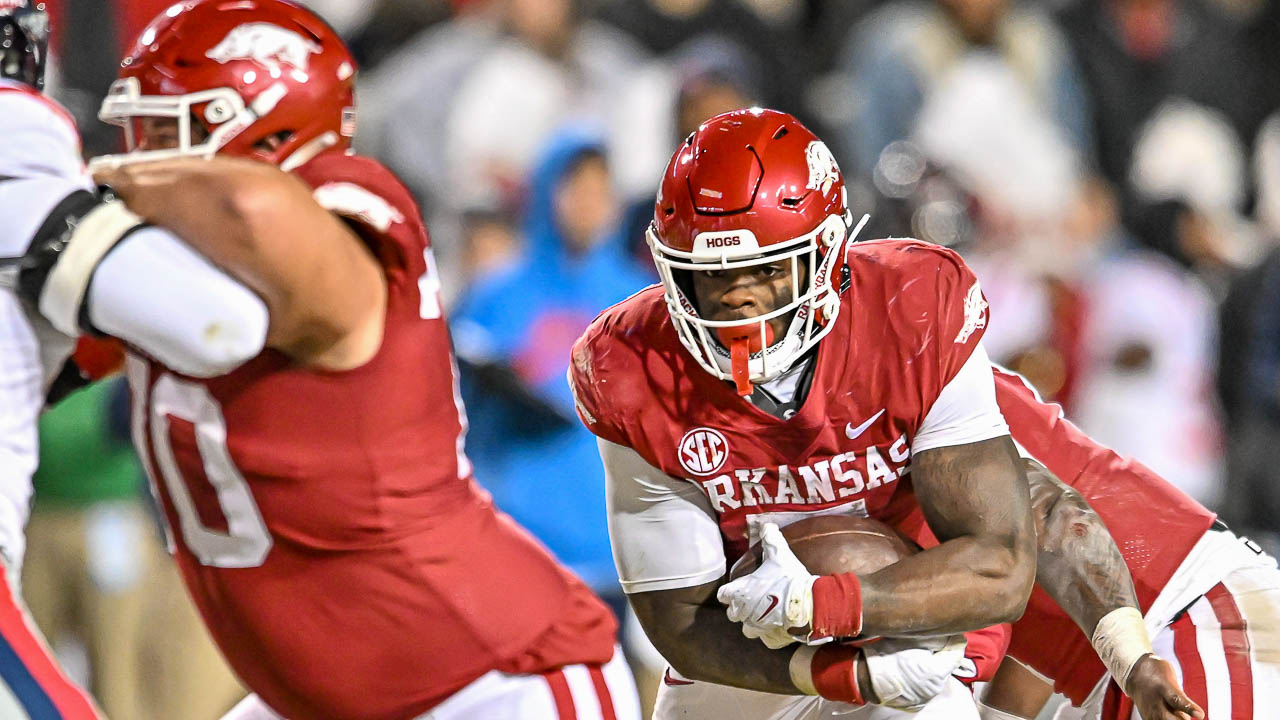 Missouri proved for the fifth straight time they somehow manage to get a win over Arkansas when the game is played in Columbia.

The Tigers held on in the fourth quarter for a 29-27 win Friday afternoon.

Arkansas has never won a football game in Missouri … and they have managed to lose in some pretty interesting ways.

Now they get another shot.

After appearing to get everybody back healthy on offense, now the defense may be short. Earlier this week, Hogs coach Sam Pittman and linebackers Drew Sanders and Chris Paul didn’t sound like they expected senior Bumper Pool to be there.

There are other questions, based on some social media gossip and guessing about another defensive starter, but no sense in speculating now … we’ll know pretty quickly

Keep up with all the action on the live blog here with photos when they become available and Zoom coverage after the game.

The weather is expected to remain sunny with temperatures in the mid to low 50’s with no significant winds. No excuses about weather in either direction things go.

• Razorbacks get the opening kickoff and go backwards three net yards and have to give it up to Missouri. Left tackle Luke Jones gives up a huge sack on third down and with that the Hogs scored just one opening drive that scored points all season.

• 1Q 9:34: Tigers get on the board first taking the punt and quarterback Brady Cook making the big plays  against the Hogs’ defense before the drive stalled. Harris Mevis kicks a 40-yard field goal to give Missouri the lead. Tigers 3, Hogs 0

• 1Q 5:26: Razorbacks answer Mizzou’s score with solid drive, going 75 yards in nine plays. The biggest play was a pass from KJ Jefferson to Matt Landers, who added some nifty footwork for a 37-yard gain. Jefferson ran un-touched up the middle for the final three yards and the lead. Hogs 7, Tigers 3

• 1Q 2:56: This might turn into a track meet. Mizzou with Cook completing two passes (to Mookie Cooper and Dominec Lovett) totaling 52 yards. The Tigers go 75 yards in just seven plays to take lead back If Hogs don’t find a way to get defensive stops, hope you took the over. Tigers 10, Hogs 7

As the first quarter comes to an end, Cook still has the hot hand and has Missouri on the Hogs’ 9-yard line.

• 2Q 14:56: Okay, this is not shaping up like anyone predicted. The Hogs’ defense hasn’t stopped Cook and the Missouri offense yet while the Hogs’ offense just doesn’t appear to be running like a well-oiled machine, either. Cook runs up the middle for a nine-yard scoring run. Missouri has 200 yards total offense while the Hogs have just 81. There were warning signs of this nobody wanted to pay much attention to against Ole Miss. Tigers 17, Hogs 7

• 2Q 5:26: Hogs struggling to figure out a way to stop Brady Cook, who has 56 more yards rushing than Arkansas does total. This time, though, linebacker Chris Paul gets a big third-down stop and the Tigers have to settle for a field goal. Tigers 20, Hogs 14

Half ends with Missouri appearing to go conservative and be content down by a single point.

• 3Q 10:09: Missouri starts chasing point early in the second half and the Hogs make them pay as Hudson Clark picks off Cook in the end zone on a two-point pass and nearly broke it for two points the other way. The Tigers took the second-half kickoff and methodically drove 75 yards in 10 plays, converting a fourth down to score on a 23-yard pass from Cook to Luther Burden down the left sideline … which grabs back lead. Tigers 26, Hogs 20

3Q 5:32: KJ Jefferson throws his fourth interception of the year to Daylen Carnell, then the Tigers have a touchdown wiped off on a holding penalty, but settle for a 29-yard field goal from Mevis. Tigers 29, Hogs 21

4Q 12:40: Razorbacks get first-and-10 inside the 10 and end up having to settle for another Little field goal, this time from 20 yards out to make it yet another Hogs-Tigers game coming down to the fourth quarter. Tigers 29, Hogs 27