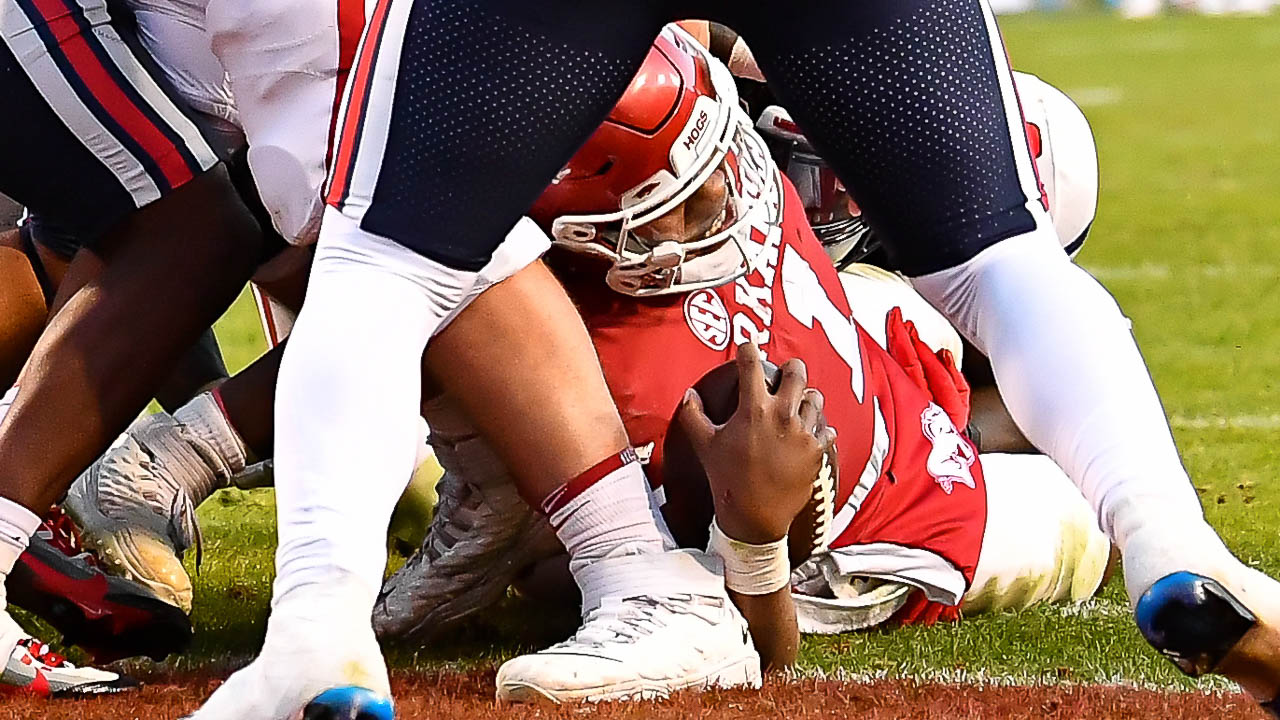 FAYETTEVILLE, Ark. — Arkansas fans will want to believe the officials were the reason they lost to Liberty on Saturday afternoon.

Many will continue to convince themselves Razorbacks quarterback KJ Jefferson got into the end zone for a two-point conversion that would have tied things with 1:11 left to play.

He didn’t make it. Oh, he ended up there, but his elbow hit the ground a couple of blades of grass before with the ball in his hand.

It doesn’t matter now. Officially, he didn’t get there.

“I knew we weren’t quite as locked in as we need to be, but tried to adjust that on the bus, during the practice, after the practice,” he said later.

That usually isn’t the best plan, but at that point it may have been all Pittman had left. He’s the one that’s going to have to deal with the fallout.

A guess is he’s looking at a tough week. Oh, and LSU comes to town next week. They are the front-runners now in the SEC West after an overtime win over Alabama on Saturday night.

“Our job is to put the best team we can out there and win ballgames,” Pittman said. “It’ll be no different next week.”

It better be different or this Razorback team might be in serious jeopardy of having to beat Missouri the day after Thanksgiving to even qualify for a postseason trip to Birmingham, Ala.

The loss dropped the Hogs to 5-4 on the season with the Tigers and Ole Miss coming to town the next two weeks.

There will be a jillion questions coming from this game, starting with the health of quarterback KJ Jefferson, who was wildly erratic from the start.

The entire offense was dysfunctional for the entire game. A stretch of a few good plays would be followed by either one of the 14 tackles for 57 yards in losses or a confounding penalty.

As much as anything, though, Pittman almost seemed dazed later. He admitted they haven’t seen this often in his three seasons. “This” is losing to a team they should have handled routinely.

“I was worried about it because of the way we played against Missouri State,” he said referring to a 38-27 win that was actually much closer than it sounds.

He tried repeating to the players Liberty was a two-point conversion from being undefeated, getting bowl eligible and a lot of other things.

“I tried to go with all those things to motivate,” Pittman said. “We had pretty good practices up until Thursday. We had a couple of mistakes on Friday walkthrough that is not typical.”

In the old days before all these rules basically took a lot of what coaches did to get a team straightened out aren’t allowed. That may be why they aren’t still scrimmaging at the football center.

The other part is that probably wouldn’t work. Logic and reason didn’t work against Liberty and the Hogs went down in flames.

A lot was expected of this team in August. Those expectations are in the dumpster now. Running the table just equals last year and the bowl game won’t be as good.

A loss to a non-Power 5 team does that.

Right now, though, Pittman has to figure out how to get a team that was just humiliated on homecoming by a team nobody expected.

“With LSU coming in here, we can’t do anything but go out and have good practices, work hard and see if we can’t get a win next week,” he said.

There’s no way to know, but the guess here is the speech to the team wasn’t that subdued and probably won’t be next week.