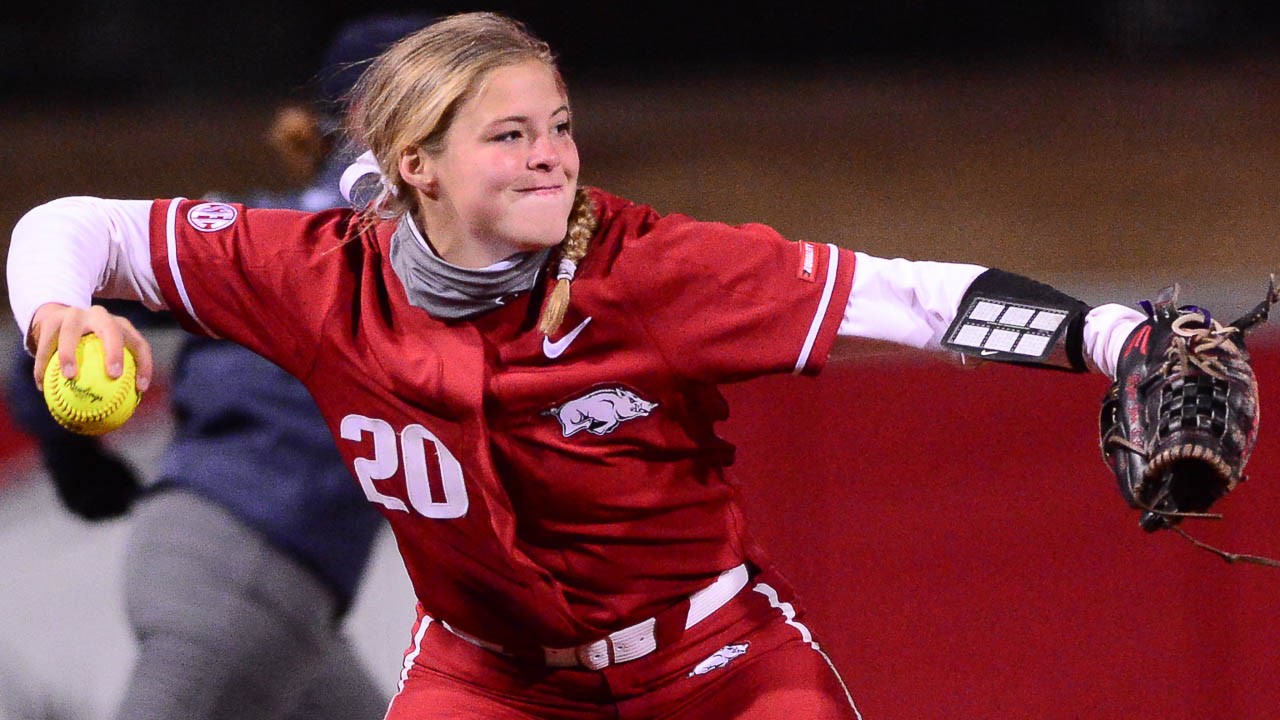 No. 20 Arkansas swept a doubleheader, downing Kansas, 8-3, and Northwestern State, 13-5 (6 innings), on Friday night during day two of the Wooo Pig Classic at Bogle Park.

The Razorbacks have won a program-record 14 straight games, surpassing the previous mark of 12 consecutive wins held by the 1999 and 2008 teams.

Kansas (6-4) answered right back in the top of the second, aided by an error and a two RBI triple, to tie the game, 3-3.

After both teams struggled in the third and fourth innings, Arkansas’ offense went back to work in the sixth as infielder Braxton Burnside gave the team a 5-3 lead by driving her first bomb of the day, a two-run homer, to left center.

Autumn Storms started for the Razorbacks and went 2.1 innings before being lifted.

Tatum Goff (2-1) took the loss firing 4.0 innings and allowing five earned runs for Kansas. She walked three and struck out one.

The Bogle Bombers tied the single-game program record, smacking five homers in a game for the second time this season.

Gibson hit two and was joined by catcher Kayla Green, outfielder Ryan Jackson and Burnside in the home run department.

Northwestern State posted a four spot in the first inning, but Arkansas scored six in the bottom of the stanza to grab a 6-4 lead.

Burnside (two-run), Gibson (solo) and Jackson (three-run) each went yard as the Razorbacks scored every run of the inning via the long ball.

Arkansas scored three more runs in the third and four in the sixth to shorten the game.

Gibson hit a mammoth two-run shot to right that landed on Stadium Drive in right and Green blasted a two-run homer to center, ending the game.

Lauren Howell (2-0) picked up the win out of the bullpen tossing 2.0 innings and allowing just one run with a strikeout.

Fellow freshman Allie Light pitched admirably and inherited a bases loaded nobody out jam in the fifth, and after an error, just one Demon runner crossed the plate.

She worked 2.0 innings and did not allow a hit with a strikeout. Redshirt freshman Jenna Bloom worked the game’s first 2.0 innings. Bronte Rhoden (1-1) took the loss for NSU out of the bullpen.

The Razorbacks outhit the Lady Demons, 11-9, with both Gibson and Burnside registering three hits and four RBI. Jackson was also 2-for-3 with three RBI.

Arkansas plays one more game this weekend as it takes on Northwestern State again at 3 p.m. tomorrow, Saturday.