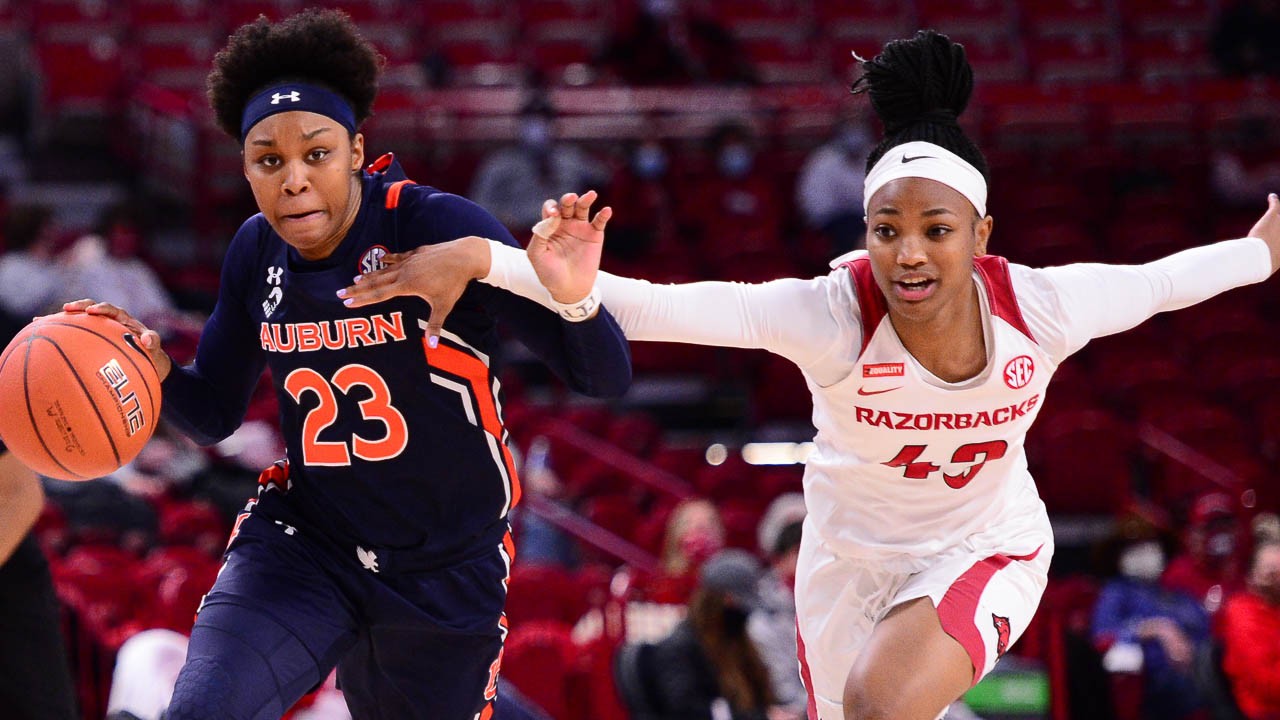 Auburn’s pressure defense for the full court and zone caused problems for Arkansas early, but they responded to roll to a 77-67 win that wasn’t that close.

Arkansas guard Amber Ramirez did her thing against the Tigers, tallying a game-high 19 points thanks to five three-pointers in the game.

She also chipped in with four rebounds and three assists.

The Razorbacks’ big three was firing on all cylinders in this one, as Chelsea Dungee and Destiny Slocum also came up big for the Hogs, going for 16 and 14 points, respectively.

Auburn’s full-court press defense forced some early turnovers, and the Razorbacks had their lowest-scoring first quarter of the season.

Arkansas worked past the Tiger defense in the second quarter, though, guided by the steady hand of Jailyn Mason, who hit two jumpers from deep in the frame. The Hogs ended the half on a 22-4 tear, erasing a 13-point deficit to secure a 33-28 halftime edge.

The Hogs spread the floor well in the second half, as four Razorbacks went for seven or more points in the final two frames.

The visiting Tigers stayed in the fight in large part due to a dominant performance in the paint by forward Unique Thompson, who notched 18 points and 19 rebounds.

However the monster performance wasn’t enough, as Arkansas was able to make winning plays late.

Despite 20 offensive rebounds by Auburn, Arkansas held the Tigers to 34 percent shooting from the field, including just 14 percent from three-point range.

• For the second straight game, Ramirez hit five or more threes. It was her third such performance this season.

• Senior forward Taylah Thomas met the task of working against Auburn’s frontcourt, snatching nine rebounds while also collecting a block in the win.

• Thomas was +17 for the second straight game.

• Dungee continued her double-digit scoring streak, which now stands at 23 games in a row.

• Mason was solid in her return off the bench, going for eight points, five rebounds, four assists and two steals.

Arkansas hits the road for Columbia against Missouri on Thursday night, starting at 7 p.m.