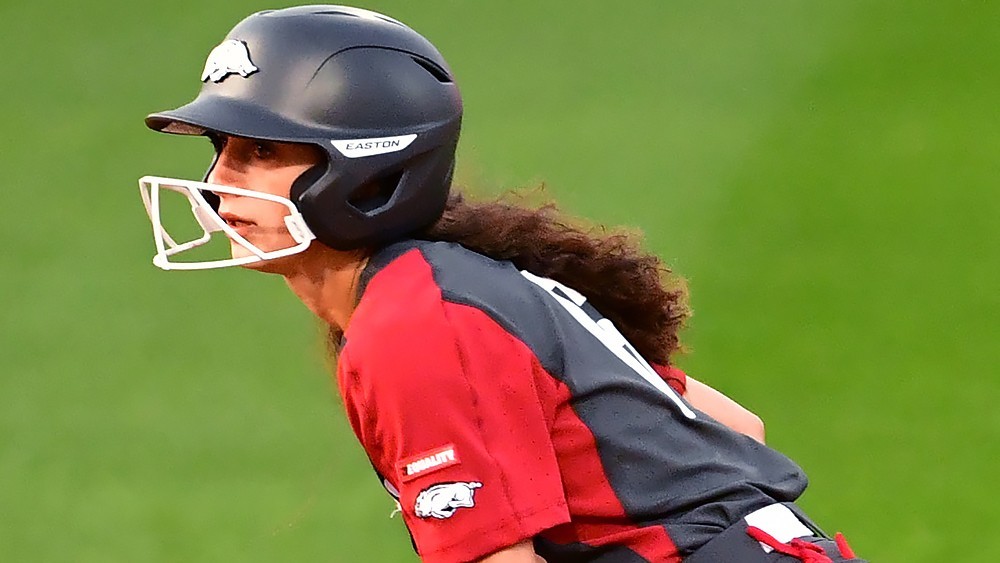 Denay Griffin’s two-run pinch hit home run in the top of the 10th inning was all Liberty needed to defeat No. 17 Arkansas, 2-0, in 10 innings, snapping a program-record 19-game win streak on Tuesday evening.

The Razorbacks (20-3) were held scoreless for the first time all season and had not lost since a 7-4 setback on Feb. 20 at McNeese.

Outfielder Aly Manzo led the way at the plate, registering two of the Hogs five hits.

During the second inning, left fielder Ryan Jackson made a crucial play that helped keep the game scoreless until the 10th by snaring a would-be homer just above the top of the Bogle Park outfield wall.

Jackson made a highlight catch in left for the second straight game after appearing on SportsCenter’s Top 10 plays last week at South Carolina.

The Razorbacks had a chance to score in the bottom of the fifth when pinch hitter Rylin Hedgecock reached via an error by the right fielder.

Pinch runner Cally Kildow became the only Hog of the game to reach third base with two outs in the inning but was stranded on a strikeout.

The offense left two on base in both the sixth and seventh innings, sending the game to extras.

Arkansas had a baserunner in all three extra innings, with infielder Valerie Ventura’s leadoff single to left in the bottom of the ninth, serving as the best chance for a rally. A popup, sacrifice bunt and flyout ended the inning.

A leadoff single in the top of the 10th inning kickstarted the Flames (18-9) offense, setting up Griffin to power her first homer of the year to left on an 0-2 pitch.

Infielder Danielle Gibson attempted to start a rally in the bottom half after she reached second on a dropped fly ball by to left, but remained on second to end the game.

Emily Kirby (5-3) won the pitcher’s duel for the Flames, throwing all 10.0 innings, and allowed five hits and four walks with eight strikeouts.

She threw 162 pitches with 104 for strikes. Mary Haff (12-2) was the tough-luck loser, dropping her first decision since the season-opener on Feb. 11 against No. 10 Oklahoma State.

She went the distance and threw just 118 pitches, allowing six hits and striking out nine without surrendering a walk.­­