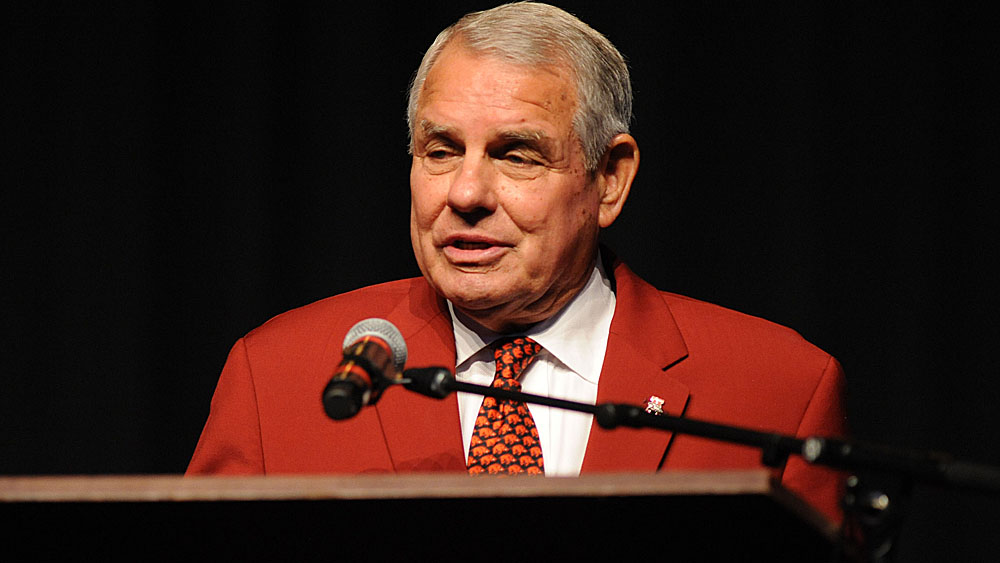 Frank Broyles would have liked the Celebration of Life for him Saturday at Bud Walton Arena.

The planning by longtime Arkansas sports information director Kevin Trainor (who is married to one of Broyles’ step-daughters) was top-notch.

A few tears, some laughs and a lot of memories were all great. The television ratings for the event, which was carried live by many stations in the state, were probably the highest non-event rating they’ve seen in awhile.

It couldn’t have come at a better time.

With the start of football season literally days away now, a Razorback team with more questions than answers has a fan base that is all over the map on expectations.

Once again, Frank delivered a pick-me-up just before the start of the season.

I’ve said for years the Hogs football coach should get Broyles to deliver the pregame talk. With the exception of Lou Holtz, I’m not sure there’s been anyone in his league on having a team come out of the locker room ready to play.

Frank could talk just about any kid into coming to play for the Razorbacks … in any sport. He never was even whispered about making improper contact, but there were times on campus when he would bump into them … or coaches would bring them by to see him in the Broyles Complex.

From John McDonnell in track to Norm DeBriyn in baseball, coaches who had him talk to players raved about the positive results.

By all reports from those that coached after him, he didn’t really interfere. He did ask questions. A LOT of questions. Holtz’ offensive game plans kept him fascinated.

It all came back to wanting one thing: Winning.

The first time I “interviewed” Broyles was in 1971 at the All Sports Banquet in Warren. Being an eighth-grader, let’s face it, back then there wasn’t a whole lot of awards going on. That’s the awkward stage when you’re not in high school and you’re not in elementary school.

And I had a cast on my arm where I had broken it. That was not an uncommon occurrence, incidentally. Broyles arrived a tad early for the festivities in the gym. It was in the spring, with no air conditioning and it wasn’t August hot, but it wasn’t February cold, either.

Broyles sat down at the head table. I decided I’d just go up and introduce myself, shyness not being a problem I struggled with. He asked me to sit down and we chatted for about five minutes or so.

He talked about winning. He mentioned losing to Texas the previous December in Big Shootout II, 42-7, and how that was so crushing he didn’t even take the Hogs to a bowl game with a 9-2 record.

“I let an assistant talk me into doing something I knew wasn’t going to work,” he said. “Never let anybody talk you into doing anything that you know won’t work. You won’t win doing that.”

Some of the grownups were filtering over by then, so Broyles saw the cast on my arm and asked how it happened. I told him playing basketball a few weeks before.

He volunteered to sign the cast, took a pen out of his jacket and signed it.

The next time I was one-on-one with him was a few years later when he was at a basketball game doing some recruiting.

“Looks like your arm is better,” he said with a smile.

Why or how he remembered that remains a mystery to me.

But it all came down to winning. He remembered everyone because he never knew when some eighth-grade kid in a cast in Warren, Arkansas, could help him win a game. I never did.

That kid did grow up and probably raised his blood pressure a few times (how he knew what everybody in the world wrote about the Hogs is beyond me … there was no internet then, remember).

At the Celebration of Life on Saturday, former coach Ken Hatfield pointed out just how important winning was to Broyles.

In the spring after he was hired in 1984, the pair went on the statewide tour of Razorback Clubs. Broyles was so optimistic, Ken wanted him to tone down the expectations a little.

“Coach, I know you love me now, but if I win five games will you still love me,” he asked Broyles.

The reply was immediate.

Many have attempted to define Broyles’ life in various ways in the week since he passed away Monday at the age of 92.

They have talked about his playing, his coaching, his broadcasting and his administrative skills. Oh, and his fundraising ability.

It probably came easy for him. It was about winning.

Of all the things Broyles did in his decades at Arkansas, that was the over-riding and most important aspect of his legacy.

He installed a culture of expecting and obtaining winning. It was more than a goal.

In Frank Broyles’ world, you had to win at every aspect of your life. Anything less was simply not acceptable. It made winners of so many of his players.

For comparison, in the 10 years before Broyles took over, Arkansas’ winning percentage was 47 percent. Back then, it was between 4-5 wins a year. Now it would be 5-6 each year.

In his 50 years as coach and athletic director, Arkansas won just over 65 percent of the time.

That has fallen to 55.2 percent since he stepped down.

Expectations. People usually live up to them.

Or down to them.