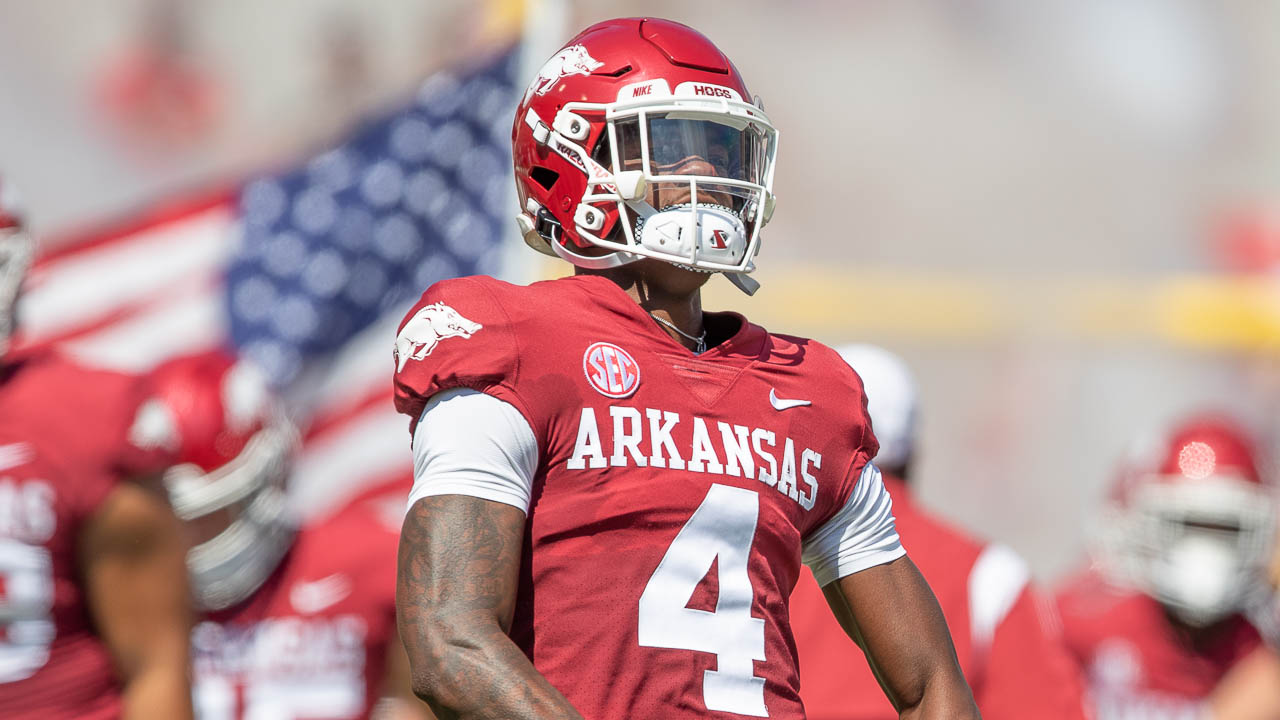 FAYETTEVILLE, Ark. — Once again, the betting line appears to a lot of Arkansas fans to be out of whack.

Mississippi State is a 9.5-point favorite at most sportsbooks in Saturday morning’s game and Razorback fans are shaking their heads, but they aren’t putting any serious money on it. The line is controlled by which way the money is going and that’s mostly on MSU.

This is usually the point where I say that’s a mistake, but it’s not my job to tell you what to do with your money.

The realistic answer is I have no idea because this Hogs’ team still has more questions than answers heading into a game that marks the halfway point of the regular season.

With KJ still questionable after getting knocked in the head against Alabama, the focus has been on backups Cade Fortin and Malik Hornsby.

Maybe Hornsby was held out of Saturday’s game because Pittman didn’t want any more film of him available than the limited supply that’s out there already?

It’s a question nobody has really asked.

Having said all of that, the Bulldogs may be a horrible matchup for the Hogs. Their offense does what the enda defense that probably wasn’t really what everybody was hoping for early in the season.

This is a team that has given up a lot of points this year, even to the first three opponents. Those teams had worse defenses than the Hogs.

My guess is this game will come down to which defense can get off the field early the most. The Bulldogs have more athletes on that side of the ball than the Hogs do … or at least they look like it.

The key, though, is whether that shows up or not.

Remember, though, the only reason the Hogs won last year’s game in Fayetteville simply because Cam Little was better than the Bulldogs’ kicker and it still came down to a shot at the end that could have sent the game into overtime.

This one, though, probably won’t get that far.

There is no telling what the picks contest between Pete Morgan and myself looks like. It’s usually close and we’ll get around to figuring it all up at some point in time.

As we get into league games, the schedule will get tougher but not this week.

All of that usually adds up to some upsets, but nothing I feel completely positive about.

When one of the best games in the league is Tennessee at an LSU team that started the season with a loss and has somehow managed to rip off four straight wins should tell you something. A lot of blowouts on the league agenda this week.

(8) Tennessee at (25) LSU: The Vols are probably the second-best team in the SEC East this season, but now we’re going to find out as the schedule gets a lot tougher in a hurry. The Tigers aren’t the best team in the West but may end up there simply because Arkansas and Texas A&M haven’t met expectations. Their winning streak ends this week. Tennessee 41, LSU 21

Missouri at Florida: Which Gators team shows up? Or even which Tigers’ team makes an appearance here. Missouri should have had at least one more win because they literally fumbled away an overtime road win at Auburn. Look for Florida to get things back on track. Florida 27, Missouri 10

Auburn at (2) Georgia: Normally we would be asking questions about the Bulldogs after falling out of the No. 1 spot, but the Tigers are a much better story considering Bryan Harsin is subject to getting canned after every loss and I’ve questioned for a few weeks now if he would make it to Halloween. Georgia 49, Auburn 14

(9) Ole Miss at Vanderbilt: Historically, the Commodores give the Rebels a hard time. Even when Ole Miss is very good and Vandy is very bad, it has often been a struggle win for the Rebels and they’ve even had a few head-shakers over the years. The Rebels’ running game likely could control this one. Ole Miss 24, Vanderbilt 10

South Carolina at (13) Kentucky: If this is close, the Wildcats have a hangover from the road loss at Ole Miss. The Gamecocks are still trying to figure out a lot of things and Spencer Rattler is finding out a quarterback needs some talent to be a great one. It might be closer than a lot of people think. Kentucky 28, South Carolina 24

Texas A&M at (1) Alabama: This was supposed to be a big game back in the summer, but the Aggies haven’t lived up to their preseason hype. The Crimson Tide may be playing a backup quarterback, but that didn’t make much of a difference against Arkansas last week and won’t this week. Jimbo Fisher better not let A&M relax if Alabama gets a big lead because it could get really ugly. Alabama 48, Texas A&M 14