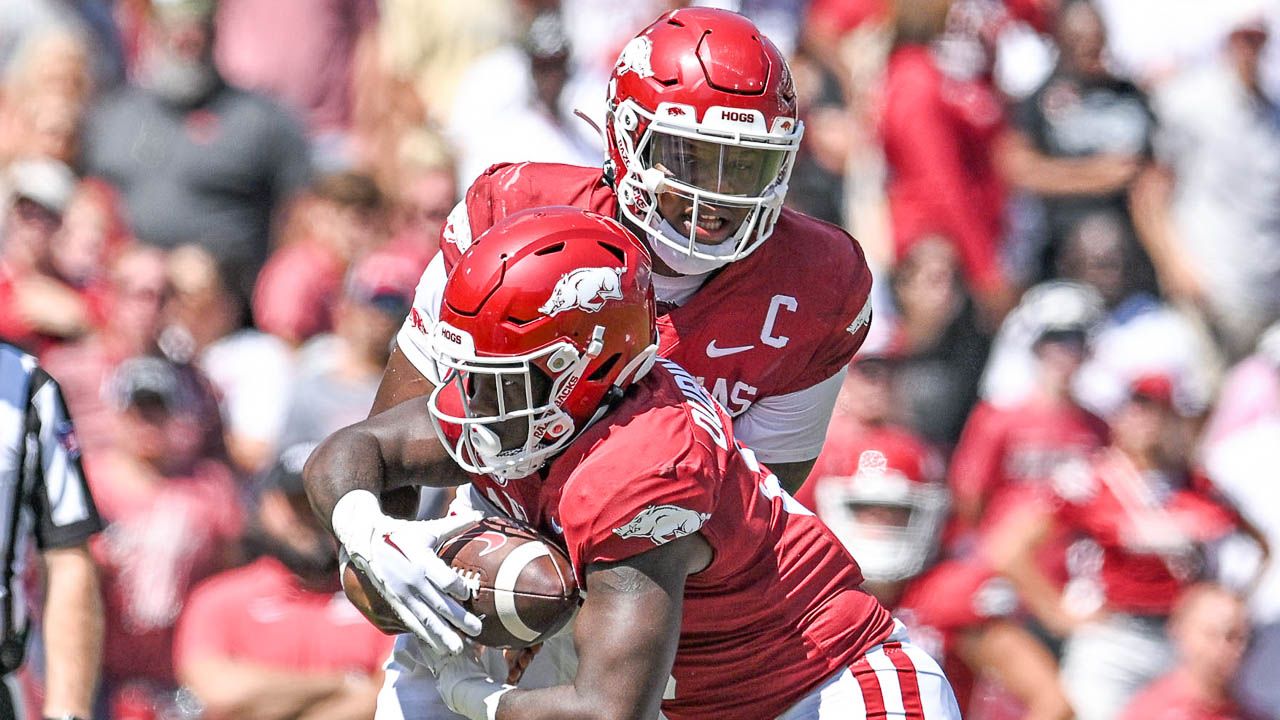 Arkansas got off to somewhat of a stumbling start in the first half, but fixed that.

Running back Raheim “Rocket” Sanders ripped off 171 yards on the ground that included a signature 76-yarder and Arkansas rolled through a dejected Auburn team, 41-27, at Jordan-Hare Stadium in Auburn, Ala.

It ended up being pretty easy.

The Razorbacks lived up to what fans were expecting all week and the pressure on Tigers coach Bryan Harsin has probably turned into an all-out fire.

I predicted he wouldn’t make it to Halloween, but even I didn’t think it would be cutting it this close.

In addition to Sanders’ running, the Razorbacks had 290 as a team and threw in an extra 234 through the air as quarterback KJ Jefferson was an efficient 16-of-24 with one touchdown.

The Hogs are now just one win away from bowl eligibility that was never really in doubt and finally get to come back home for a game against Liberty next Saturday at 3 p.m.

It’s been talked and discussed all week and Arkansas fans are confident of a win today at Auburn.

The experts are saying this is all about the Hogs’ running game with Raheim “Rocket” Sanders leading the charge. Auburn also has a pretty good ground attack led by Tank Bigsby.

But it has to be played on the field.

The Hogs will be in their classic road white road uniforms with the correct helmets, the traditional red. The Tigers will be in white pants, navy jerseys and white helmets. Thank goodness nobody is doing one of those goofy combos.

This didn’t start well for the Razorbacks with a shanked 27-yard punt by Reid Bauer followed by a first-down intentional grounding call against KJ Jefferson.

All of that set up Auburn near midfield and an apparent fumble by Tank Bigsby was recovered by Latavious Brine but the officials ruled him down and couldn’t get a clear enough shot on replay to overturn.

This time, though, it didn’t lead to points although Jadon Haselwood fumbled after making a catch and the Tigers got it back and are driving.

1Q 5:55: Auburn grabs the early lead after getting only a couple of first downs following the fumble recovery. This one is shaping up to be a really ugly game or else everybody is slow waking up. Anders Carlson kicks a 46-yard field goal for first points. Auburn 3, Hogs 0

1Q 3:10: Now this looks more like it. Hogs go 75 yards in eight plays, mostly on the ground with a big pass from KJ Jefferson to Warren Thompson for 29 yards and Jefferson barely got in on a run over the right side. Hogs 7, Auburn 3

At the end of the quarter, the Tigers look like a team that has quit and I really don’t care what denials they make or anything else. If they don’t figure out something, this could be the tipping point to dump embattled coach Bryan Harsin.

2Q 10:27: Things are moving for the Hogs but there is nothing smooth about this game on either side. When the receivers can’t get open against Auburn’s secondary, Jefferson takes off and drags a couple of defenders with him for the final couple of yards into the end zone and some operating room. Hogs 14, Auburn 3

2Q 3:43: After a punt by Reid Bauer completely flipped the field Auburn needs just five plays to go 93 yards as the Hogs’ defense apparently took an un-planned series off. Running back Tank Bigsby goes 41 to stop the bleeding. Hogs 14, Auburn 10

2Q :03: Auburn manages to move the ball quickly downfield against the Hogs’ secondary that obviously still has some issues, hitting two key passes to set up a Carlson 27-yard field goal. Hogs 17, Auburn 13

The Hogs struggling on the opening drive of the second half getting off the field on third down. Jordan Domineck finally manages to trip Ashford up and then Isaiah Nichols blocks a 52-yard field goal attempt by Anders Carlson to hold off the Tigers.

3Q 6:02: With Auburn looking completely disorganized and chaotic on defense, the Hogs put together a 64-yard drive behind some big runs and key passes by Jefferson, the last one being an 11-yarder across the middle to Haselwood and they have some breathing room. Hogs 24, Auburn 13

3Q :44: A direct snap to Rashod Dubinion may have allowed the Hogs to break away completely from the Tigers. The freshman took the snap and run through the middle for a two-yard scoring run. The biggest plays came on huge runs by Sanders, who has 171 yards on the ground in what has turned into a monster day. Hogs 31, Auburn 13

4Q 7:35: Auburn has quit on this game and the problems on The Plains look real. They look like a Chad Morris-coached team that Hog fans will remember from 2019. Dubinion scores from the 2 to cap a 10-play, 84-yard drive. Hogs have 257 on the ground in the game and it’s a blowout. Hogs 38, Auburn 13

4Q 5:53: Not that it’s really going to matter, but the Tigers show some proof of life as the Hogs’ defense has probably relaxed a little with Ashford starting to hit some passes and completes a 9-yarder to a diving Camden Brown for a score. Hogs 38, Auburn 20

4Q :04: The Tigers added a so-what touchdown at the end on a 1-yard run by Jarquez Hunter to bring this one to a merciful close for Auburn. Hogs 41, Auburn 27