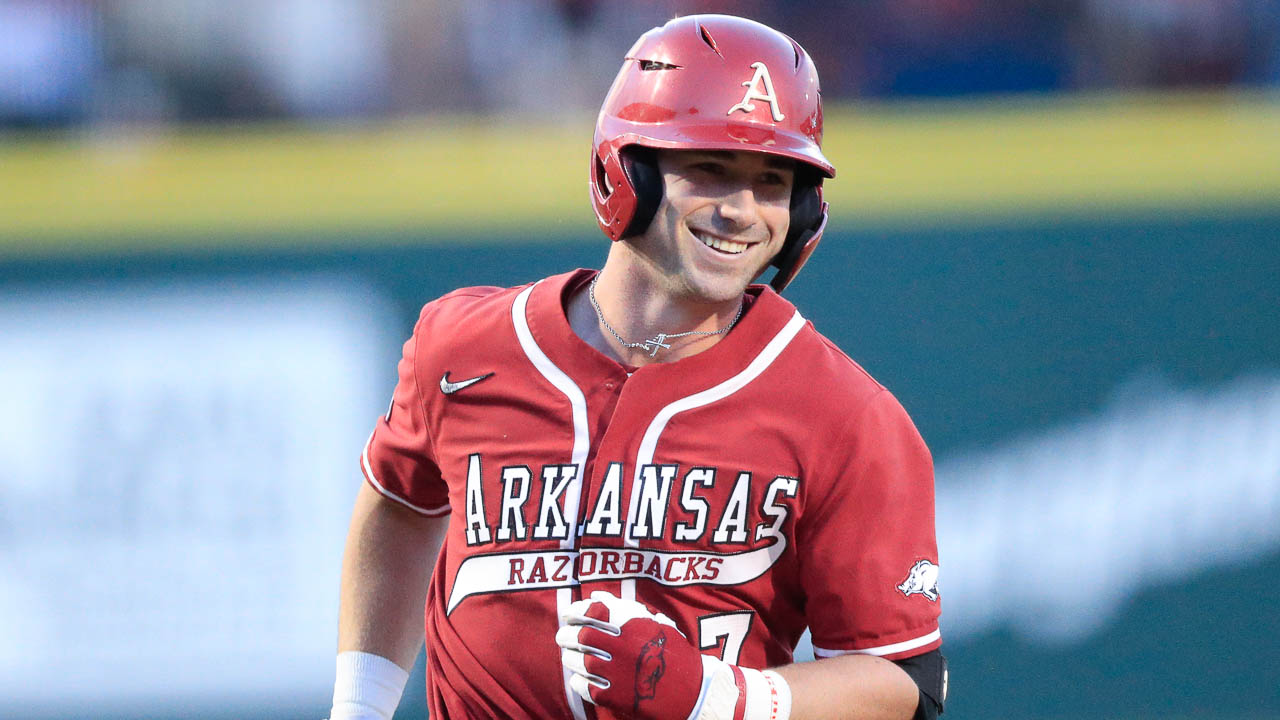 FAYETTEVILLE, Ark. — Arkansas’ Cayden Wallace, Peyton Pallette and Robert Moore were selected on day one of the 2022 MLB Draft.

All three Razorbacks were picked up in the second round on Sunday night. Wallace was selected No. 49 overall by the Kansas City Royals, while Pallette went No. 62 overall to the Chicago White Sox and Moore was grabbed with the No. 72 overall pick (CB-B) by the Milwaukee Brewers.

Arkansas was one of five college programs with a nation-leading three players selected on Sunday.

Florida, Oklahoma, Oregon State and Tennessee each also had three players taken during the first day of this year’s MLB Draft.

Sunday’s three selections also marked the Razorbacks’ most picks in the first two rounds of the draft since 2010, when infielder Zack Cox (first round, No. 25 overall – St. Louis Cardinals), outfielder Brett Eibner (second round, No. 54 overall – Kansas City Royals) and pitcher Drew Smyly (second round, No. 68 overall – Detroit Tigers) were selected.

One of the Razorbacks’ three team captains in 2022, Wallace collected numerous awards throughout the season and was named to the ABCA/Rawlings South All-Region Team at the year’s end.

Pallette, who missed the past season due to Tommy John surgery, was one of the most electrifying pitchers in all of college baseball as a true sophomore in 2021.

The Benton, Ark., native was named to the Newcomer All-SEC Team after logging a 4.02 ERA in 56.0 innings of work over 15 appearances, including 11 starts. The right-hander fanned 67 on the year as a member of an Arkansas pitching staff that set a then-school record with 657 strikeouts in 2021.

The slick-handed middle infielder played near-perfect defense at second base, committing only two errors – good for a .992 fielding percentage.

He assisted on 46 double plays for an Arkansas team that finished first in the SEC and second in the nation in double plays turned (60).

The Leadwood, Kan., native tied for the team lead in walks (42) while finishing second in doubles (19) and triples (2). His 48 runs scored were fourth most on the Razorbacks.

Through the first two rounds of this year’s draft, one Razorback signee – pitcher Cole Phillips – has been selected. The right-hander from Boerne, Texas, was picked up by the Atlanta Braves in the second round with the No. 57 overall pick.

The 20-round MLB Draft continues with rounds 3-10 tomorrow, starting at 1 p.m.