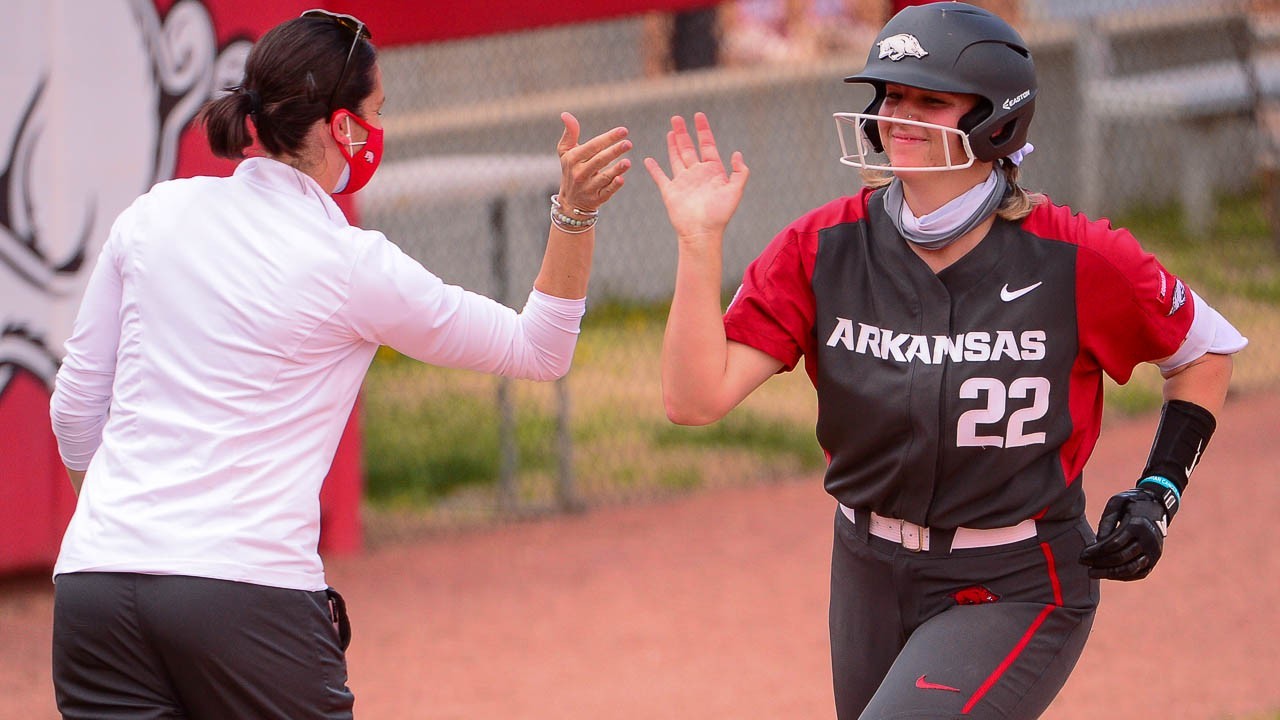 Arkansas came back from a four-run deficit by scoring four runs in the bottom of the third and two in the fourth to defeat Mississippi State, 8-7, at Bogle Park on Saturday afternoon.

The Razorbacks (27-3, 8-0 SEC) are the SEC’s only unbeaten team and off to their best start to a season through 30 games in program history.

Mississippi State (15-13, 0-8 SEC) took a 4-0 lead scoring a single tally in the first inning and three runs in the second. All four runs were unearned via two errors.

The Razorbacks loaded the bases in the second, and pinch hitter Rylin Hedgecock singled to left and outfielder Sam Torres reached on a fielder’s choice, making the score 4-2.

The Bulldogs stretched their lead back to four on a solo homer and RBI double in the third.

The following half inning, Arkansas loaded the bases and utilized free runners to their advantage.

Designated player Lauren Graves walked, infielder Nicole Duncan walked, Torres hit an RBI single and outfielder Hannah McEwen was hit by a pitch tying the score at 6-6 after the third.

For the second straight game, infielder Linnie Malkin gave Arkansas the lead, smacking a solo homer to right in the fourth, putting the Razorbacks up a run.

After infielder Keely Huffine singled and Duncan was hit by a pitch, Torres blooped a base hit to left, giving the Razorbacks a much-needed 8-6 cushion.

Mississippi State tried to rally in the sixth and doubled in a run.

Pitcher Mary Haff came in from the bullpen and inherited two runners in scoring position with one out and recorded a popout and a strikeout to end the frame.

Autumn Storms started for the Razorbacks and went 2.2 innings, allowing six runs, however, just two were earned. Reliever Jenna Bloom (6-1) proved to be crucial in the winning effort, retiring eight in a row, and allowing three hits with a strikeout.

Haff (3) picked up her third save of the season, firing 1.2 innings with two strikeouts and an intentional walk.

The Bulldogs outhit Arkansas, 10-8, and had four extra base hits. Arkansas’ only extra base hit of the day was Malkin’s solo home run.

She led the offense with a 3-for-4 day at the plate and scored three runs. Torres recorded a career-high three RBI and finished 2-for-3 with a walk.

Dating back to 2018, the Razorbacks have won five straight games against Mississippi State.