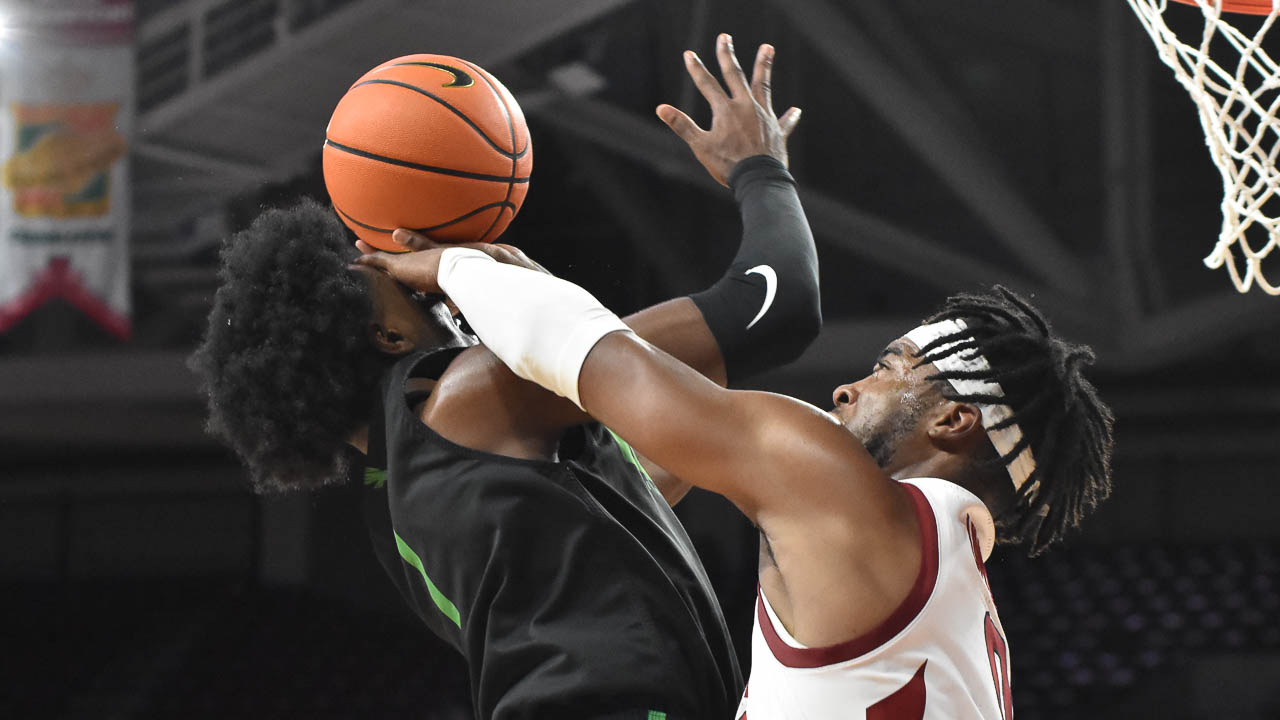 Arkansas used an early 18-0 run and held on in the second half to defeat North Texas, 68-60, Saturday afternoon at Bud Walton Arena in the Razorbacks’ second and final exhibition game.

JD Notae led all scorers with 21 points while Chris Lykes, who provided sparks in the first and second halves, contributed 14 off the bench in the win. Stanley Umude added 12 points.

Last year, Arkansas pulled away late in the first half and held North Texas scoreless for the first 4:55 of the second half to secure the win.

This year, Arkansas was down 13-12 before going on an 18-0 run and never relinquished the lead.

The Mean Green hung around over the next 2:30 and got to within three (56-53) with four minutes to play.

The Razorbacks answered with an Au’Diese Toney layup and an old-fashion, 3-point play by Trey Wade for some breathing room with just under three minutes to play.

Toney threw down an alley-oop dunk at the 1:09 mark and Lykes sealed the game with a pair of free throws with 46 ticks left to provide the 68-60 final.

North Texas, who won Conference USA titles each of the last two years and advanced to the second round of the 2021 NCAA Tournament, had three players in double digits including Mardrez McBride (16), Tylor Perry (15) and Rubin Jones (10). Abou Ousmane had a game-high 10 rebounds.

Arkansas opens the regular season on Nov. 9 (Tuesday) against Mercer.

Tip-off is set for 7 p.m. and the game will be broadcast on SEC Network Plus.

• Arkansas led the first two media timeouts (8-7 and 12-7) thanks to a spark off the bench from Chris Lykes, who had seven out of the team’s first 12 points.

• Thanks to a technical foul on North Texas head coach, Arkansas ultimately pushed the run to 18-0, keeping UNT scoreless for over 6:03 and taking its largest lead of the half of 17 points (30-13).

• Arkansas was 7-of-12 from 3-point range while holding North Texas to 3-of-17. Overall, Arkansas shot 48 percent from the field while the Mean Green were just 25 percent.

• Arkansas put the game out of reach with an alley-opp dunk by Au’DIese Toney with 1:09 to play and two free throws by Chris Lykes with 46 seconds left.

• North Texas improved its shooting to 46.2 percent in the second half while Arkansas shot just 36 percent.

• Both teams combined to make just 1-of-15 from 3-point range in the second half.

• North Texas scored the first points of the game with a dunk from Abou Ousmane at 19:33. Arkansas answered with a JD Notae 3-pointer at 18:45.

• Chris Lykes was the first sub for Arkansas.