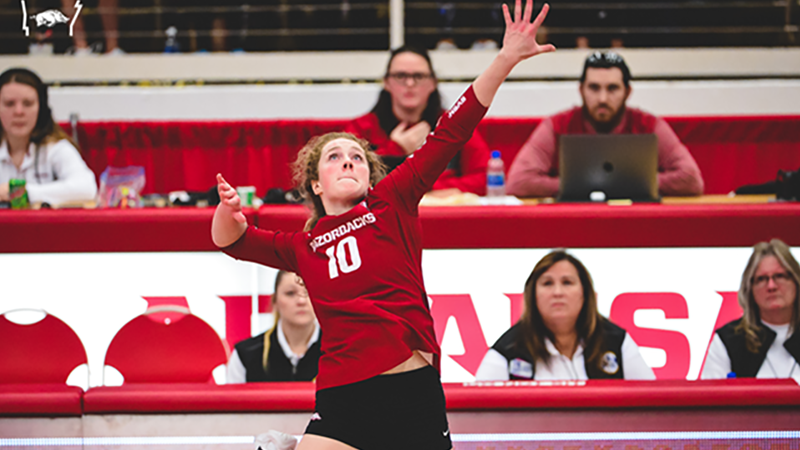 FAYETTEVILLE — Volleyball coach Jason Watson led his team to its first win over the Alabama Crimson Tide in 10 meetings, a streak that dated back to 2013.

The Hogs dominated in the first and third sets, recording .400 and .394 clips in those sets respectively.

Arkansas dropped a thrilling fourth set, 25-22 despite a late 3-0 scoring run to come within two of Alabama’s lead.

The Razorbacks jumped out to an early three-point lead in the fifth set, but the Tide responded and after the mid-set break, led 11-7.

Arkansas capitalized on back-to-back kills from Maggie Cartwright and Gillen to spark a 4-1 scoring rally that put them within one of the Tide.

Gracie Ryan recorded a crucial service ace to tie the score at 13 points apiece and after back-and-forth rallies, the Razorbacks came out on top, clinched with a block by Maylin Garrett and Ellease Crumpton.

“I’m happy for our athletes.  They have put in a lot of time and effort to get a win.  They continue to battle and found a way this afternoon. We have another great home stand this coming weekend as well against Ole Miss and Mississippi State. I’m excited to get back in the gym and build upon this weeks’ work.”