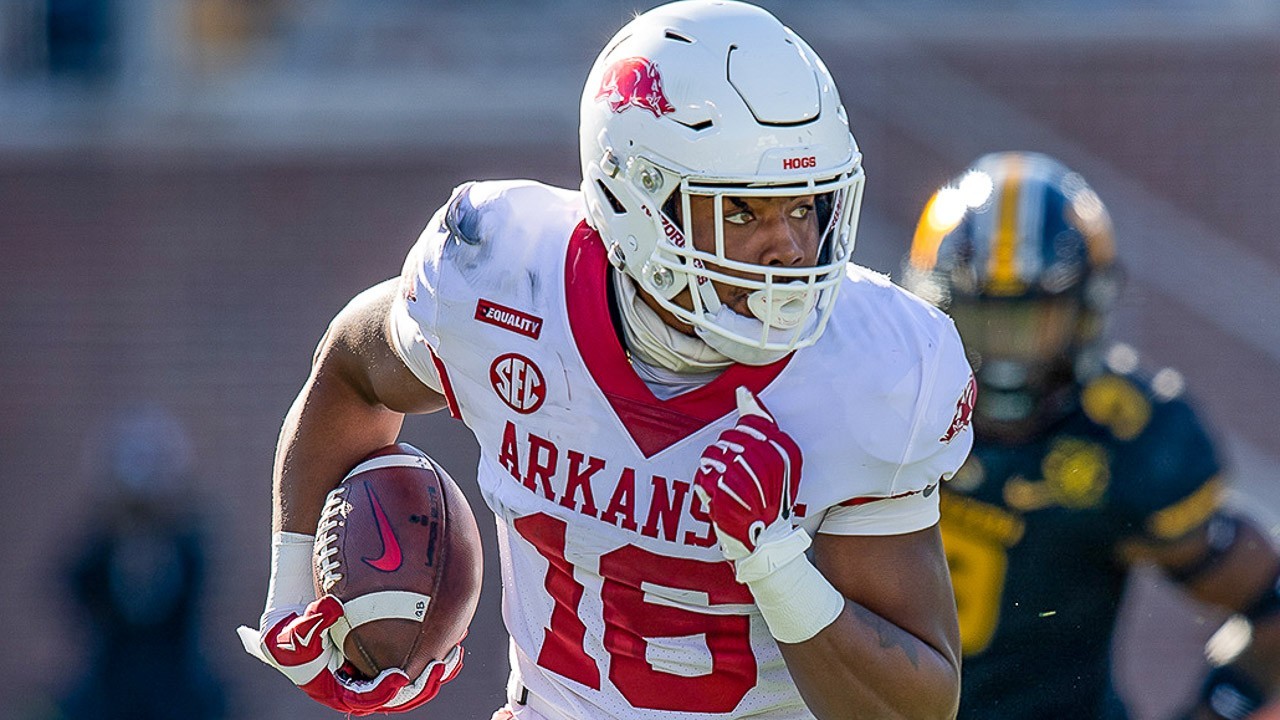 Arkansas will conclude a regular season that many questioned would even happen Saturday at Razorback Stadium against No. 1 Alabama.

Whoever coined the phrase saving the best for last didn’t have the Crimson Tide in mind.

The game is set for 11 a.m. and will be televised by ESPN.

You can also listen to the game at HitThatLine.com HERE. The game is broadcast on ESPN Arkansas 95.3 in the River Valley, 96.3 in Hot Springs and 104.3 in Harrison-Mountain Home.

10 things to know before kickoff

1. Last week in the final road game of the season, Arkansas fell 50-48 at Missouri on a game-winning 32-yard field goal at the horn. The Razorbacks momentarily held a 48-47 lead after junior wide receiver Mike Woods made a 14-yard touchdown grab in the back of the end zone with 43 seconds remaining and converted the ensuing 2-point conversion, snaring the ball after it deflected off a Missouri defender. The offense posted a season-high 48 points and 566 yards of total offense, the most since recording 661 against Mississippi State in 2016. Arkansas scored at least seven touchdowns in an SEC game for only the 12th time in program history and the first time since 2015.

2. Despite the abbreviated 10-game conference-only regular season schedule, sophomore wide receiver Treylon Burks has compiled one of the best seasons by a Razorback receiver in program history. Burks was injured in the first half against Mississippi State and missed the entire game against Auburn the next week. Against Missouri, he had 10 receptions and scored a touchdown while recording 206 receiving yards, the third-most in school history and the program’s fifth 200+ yard game. For the season, Burks has hauled in 49 catches for 804 yards (16.4 ypc), the third-highest mark in the SEC, and seven touchdowns appearing in just eight games. He is only three grabs and 66 yards away from moving inside the school’s single-season top 10 for most catches and yards in a season. Burks’ seven touchdown snatches are eighth-most in a single-season in program history and the most by a Hog receiver since Keon Hatcher in 2016 (8).

3. Redshirt junior running back Trelon Smith joined Burks posting a career day against Missouri, running for a career-best 172 yards (6.6 ypc) and three touchdowns on 26 carries. He is the first Hog to rush for three scores in a game since Rawleigh Williams III’s four touchdown game against Mississippi State in 2016 and recorded the first 170+ yard rushing game against an SEC opponent since Williams’ 180-yard outing against Ole Miss in 2016. Over the last three games, Smith has posted 318 rushing yards (7.1 ypc), two 100+ yard rushing games and five touchdowns. For the season, he ranks ninth in the SEC with 641 rushing yards.

4. Filling in for regular starter Feleipe Franks at Missouri, redshirt freshman quarterback K.J. Jefferson made his second career start, completing 18-of-33 passes for 274 yards, three touchdowns and no interceptions, while also rushing for 32 yards and a touchdown. He became the first Razorback QB to throw for 270+ yards and three touchdowns with at least one rushing score since Ryan Mallet in 2010 against ULM (400 yards, three passing touchdowns, one rushing touchdown).

5. Franks has tossed 17 touchdowns this year, the most at Arkansas since Austin Allen’s 25 touchdown passes in 2016. Completing 155-of-228 passes for 2,017 yards, Franks ranks fourth in the SEC in passing yards, passing yards per game (252.1) and passing efficiency (161.3), while placing fifth in passing touchdowns and yards per completion (13.01). He is the first Arkansas QB since 2000 to throw for 200 or more yards in each of his first eight games of a season. The grad transfer’s 68-percent completion percentage is on pace to break the school’s single-season record (Kevin Scanlon, 1979, 66.2-percent).

6. Under the direction of first-year coach Sam Pittman, Arkansas has won three games, the school’s most SEC wins since 2016 and most wins overall since 2017. The Hogs’ three wins are the most for a team coming off a zero-win SEC schedule since Auburn in 2016. Pittman is also the only first-year Arkansas head coach to win three or more SEC games in his first season since Houston Nutt won six in 1998. He’s accomplished this facing one of the toughest schedules in FBS history, playing six games against AP Top 25 squads. Pittman and the Hogs are the only team to play the SEC’s top three teams, No. 1 Alabama, No. 6 Florida and No. 8 Texas A&M. First-year defensive coordinator and Broyles Award nominee Barry Odom has guided the defense to 13 interceptions, the most in the SEC and tied for third-most nationally.

7. First-year offensive coordinator Kendal Briles has helped the offense improve by an average of 59.0 yards and 5.5 points per game compared to the first nine games of 2019. A big reason for that is Arkansas’ explosiveness, recording a nation-leading 11 plays of 50+ yards, equaling the total of the last two seasons combined. Ten of those plays have come through the air, with Burks’ four such grabs tied for third-best in FBS. Smith took this season’s only rushing play of 50+ yards 82 yards to the house against Florida, the longest Hog run against an SEC opponent since 2011.

8. Redshirt freshman defensive back Jalen Catalon is the only player in FBS with 85+ tackles and at least three interceptions. His 89 total tackles lead all FBS freshmen, becoming the first SEC freshman since Tennessee’s Eric Berry in 2007 with at least 86 tackles and three picks. He made a career-high 16 tackles against LSU and has totaled five 10+ tackle games this season, including three straight against Tennessee, Florida and LSU. Catalon is also the first Razorback freshman to have over 50 tackles in a season since Dre Greenlaw in 2015 (95). Earlier this week, he was named one of 16 semifinalists – and one of two freshmen – for the Jim Thorpe Award, presented to the nation’s top defensive back. Catalon joined former Hog Steve Atwater, a 2020 Pro Football Hall of Fame inductee, as the only Razorbacks to be semifinalists for the award.

9. Redshirt senior linebacker Grant Morgan leads the country with 111 total tackles and was named one of 16 semifinalists for the Dick Butkus Award, given annually to the nation’s best linebacker. Additionally, he was honored as a nominee for the Burlsworth Trophy, which is awarded to the most outstanding player who began their career as a walk-on and named after former Arkansas walk-on and All-American offensive lineman Brandon Burlsworth. He’s made 19 tackles in a game twice this season, tied for second-most in an FBS game this year behind teammate Bumper Pool’s 20 at Mississippi State. Morgan, Catalon and Pool (88 tackles) account for 38.1% of Arkansas’ total tackles.

10. Arkansas takes on Alabama for the 31st time and trail in the all-time series, 8-22. The Hogs have not beaten the Crimson Tide since 2006, a 24-23 double overtime win in Fayetteville. Per ESPN, since 1993, Arkansas and Alabama have played four 1-point games, the most in a series history during that stretch. Alabama has been ranked No. 1 in the AP Poll each of the last four meetings.