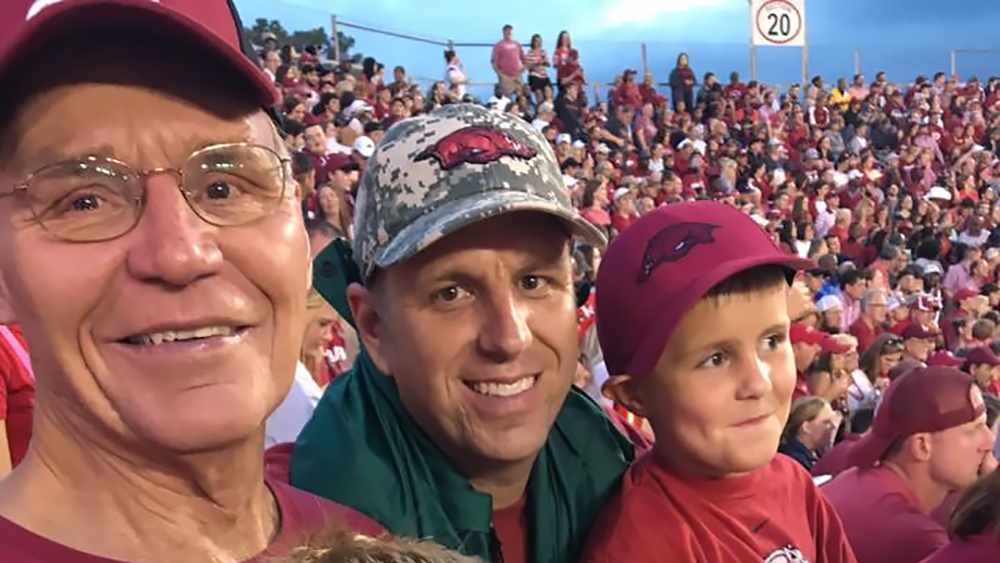 My wife, Sheena, insists my boys would have loved sports even if I hadn’t been around to raise them initially.

That J.D. (10) would know Jack Youngblood played a game on a broken leg and appreciate Roberto Clemente as much for his humanitarian efforts as his Hall of Fame baseball career. That Luke (7) would know the football rule book inside and out and want his grandmothers to do play-by-play while he shoots baskets in the driveway.

She could be right. They come by it naturally after falling in the fourth generation of a family of sports nuts. Sports have been a part of the Olson family for decades and J.D. and Luke are the latest members of the club.

My Grandpa John, a World War II veteran, grew up in Iowa with Swedish immigrant parents. I’m not sure what his exposure was to sports as a boy, but he raised his two boys to love sports.

My dad, Dave, grew up playing baseball and football and adored the New York Yankees after taking summer trips to visit his grandparents’ Swedish family members who had settled in New York. He saw his first Yankees game at 5 and saw all of the New York teams play at their respective ballparks.

Grandpa John was a steadfast Iowa fan and drove his boys more than three hours to Iowa City to see the Hawkeyes play football. The family also took family vacations where National Parks and ballparks were the main attraction. My dad once caught a batting practice foul ball of the bat of his hero Mickey Mantle before a Yankees/Twins game at old Metropolitan Stadium in Minneapolis.

In 1969, Dad enrolled at Iowa State, which flipped Grandpa John’s allegiance to the Cyclones. Ames was much closer to his home in Webster City, and he held football and basketball season tickets for many years.

When I came along in 1974, I didn’t have a chance. I was swinging a plastic bat when I could walk and attending Iowa State games not long after. My brother, Andy, was born three years later, and we spent many hours playing catch, watching sports on TV and going to our local high school and Iowa State games with Dad and Grandpa John.

We also made a few trips to Kansas City to see the Royals and Minneapolis to the see the Twins. We made at least one trip a summer to Des Moines to see the Chicago Cubs AAA team, the Iowa Cubs, in action.

Those trips and my good friend Brayton Sehnert influenced me in becoming a Cubs fan along with a passion for the Yankees like Dad and Grandpa John. On one trip to Des Moines, our family car broke down in the parking lot.

Dad and I had to ride in the tow truck for more than two hours in the middle of the night. It’s a story we laugh about often.

After all of those games and conversations with Dad, I realized by fifth grade I wanted to be in the sports media. My love for writing came from my mom, Connie, a longtime elementary school teacher, so that made a great combination for the beginnings of a fulfilling career.

After I married a sweet Southern Belle named Sheena, I dreamed of having two boys I could pass on the Olson family sports passion to. The Good Lord answered my prayers, and we had J.D. and Luke with nearly the same age difference as Andy and I.

Sheena, also a big sports fan, and I didn’t lug the boys to games as infants, but it wasn’t long, and they were with us. Luke had seen a Hogs game, MLB game, NFL game and NBA game all before the age of 5.

Their NFL debut was special as Santa Claus brought Dallas Cowboys/Detroit Lions Monday Night Football tickets in 2016. If that wasn’t special enough, the next day, they got to meet former Hogs star Darren McFadden.

Unlike the house I grew up in, this one is divided. Sheena and Luke love the Cardinals and Cowboys. JD and I like the Cubs and Chiefs. JD loves the Hogs but has been bitten by the Cyclones bug which caused Luke to — GASP — root for the Hawks.

The Hogs, though, bind us. Together, we cheer the wins and lament the losses. Half of Dad’s wardrobe is Cyclones, the other half is Hogs. He’s accompanied us to several games. We had a great time in 2017 (see the picture) when we all piled in the van and watched Arkansas play Florida A&M at War Memorial Stadium. That was Luke’s first Arkansas football game.

We’ve seen Razorback basketball at The Bud and baseball games from a Baum-Walker suite. Luke is a big fan of former Hogs tight end Jeremy Sprinkle and JD likes former UA QB Tyler Wilson, who he met the other night. They both consider McFadden and fellow Bryant native and former Hogs pitcher Blaine Knight personal friends.

Speaking of Knight, my favorite memory so far was taking them to see the fellow Bryant native play in the final regular-season game against Texas A&M last season. Thanks to a friend, we sat in the front row on the first base line.

Arkansas beat the Aggies, and the boys enjoyed fireworks, autographs and meeting Knight, whose mother Karen worked at the boys’ school, following the game.

I was an average (at best) athlete. JD and Luke already have me beat. JD has played soccer since he was four and has become a solid keeper. He has a promising career as a defensive lineman waiting when his parents give him permission to play football.

Luke’s favorite sport is baseball, and he’s way more advanced than his dad at this age playing up in the pitching machine league at 7 while seeing time at four different positions this season. He also plays basketball and is working on beating me in one-on-one.

I know many of you have similar stories and experiences with your grandfathers, dads and sons. Sports were made to share with family. It’s always more fun when you are enjoying games with those you care about most.

I hope you are able to spend some time with family on Sunday celebrating Father’s Day. Fittingly, we will all be at a ballpark in Benton watching Luke and the Bryant 7-year-old All-Stars playing in a tournament.

I wouldn’t have it any other way.