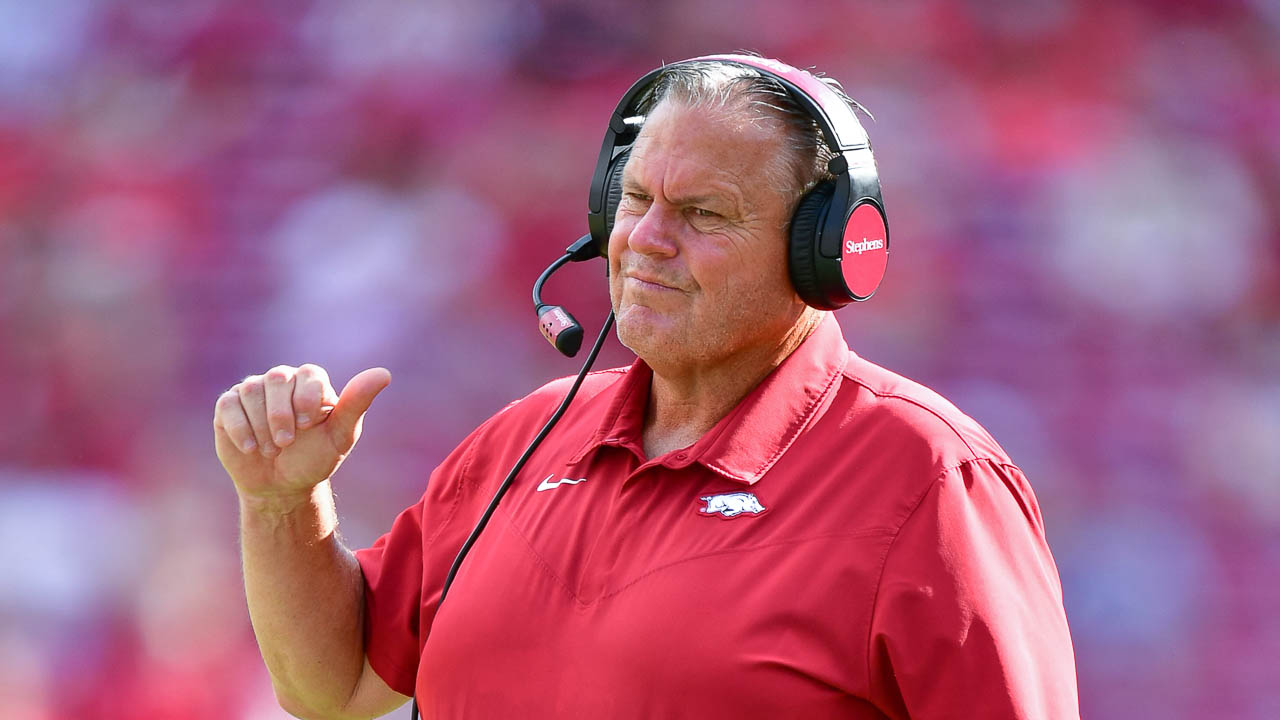 It turns out halfway through the season offense isn’t the problem any more.

There may have been bigger questions in the summer about how KJ Jefferson would perform as Arkansas’ starting quarterback, but all of that can be put to rest now.

Moving the ball and scoring points wasn’t the problem in a 52-51 loss at Ole Miss on Saturday.

Defensive coordinator Barry Odom couldn’t devise a defense that caught Lane Kiffin and Matt Corral off guard two years in a row and the trend on defense is going downhill fast.

And it wasn’t the refs’ fault, despite the fact the Hogs have lost very few games in the last 60-something years that didn’t involve poor officiating. Go sit down. The adults are talking now.

Sam Pittman didn’t have any answers in the post-mortem when the defense was a bigger issue than his decision to go for a 2-point conversion after a 75-yard drive and Jefferson’s third touchdown pass of the day on the final play, a 9-yarder to Warren Thompson.

“I really don’t know,” he said later about the defense. “A bunch of it was early, we didn’t tackle Any open-field tackle, we couldn’t get the guy on the ground. And that includes Corral.

“That was by far our poorest day tackling. Then when we had some busts in the secondary, guys were wide-open and we couldn’t fill the gap from the safety area on a simple little stretch play.”

It really was a bad day by both defenses. The two teams combined for just under 1,300 yards and went over the oddsmakers’ over-under by nearly 40 points.

By the end of that game both defenses were worn out.

That was absolutely the reason Pittman had decided before the kickoff he was going to roll the dice, which is the correct way to do it.

Afterwards, he wasn’t second-guessing himself. The time to worry is before you place the bet, not after you roll the dice.

“I’d do it again 100% of the time the situation we were in,” Pittman said later. “Ole Miss was just scoring EASILY. We had to work for a little bit of ours. Theirs was coming in bunches and bunches of yards.

“We just didn’t convert it.”

Looking back at the first half of the season, the Hogs caught some breaks.

Texas hadn’t figured things out on offense in Week 2. Texas A&M was in complete chaos in Week 4. Those were Razorback dominations, but in context they weren’t playing the way they are now.

Arkansas couldn’t tackle anybody almost from the start.

“By far our poorest day tackling,” Pittman said. “We’ve got to figure it out.”

Part of it is depth. After the first group there are some players that try hard but aren’t as polished, which you better be playing in the SEC or you’re going to get your hat handed to you.

“We’re beat up a little bit more with bumps and bruises, broken hands and different things of that nature,” Pittman said. “That’s certainly going to play a part of it.”

That’s not an excuse, by the way. No coach can throw his backups under the bus. Not in this day and age where they will start pouting and put their name in the transfer portal.

“We can tackle better,” he said. “We tackle in indy (individual drills), we tackle — we don’t tackle live bodies — but we form tackle, we tackle on sleds.”

To tell the truth that’s probably part of the problem. Tackling live to the ground is not something many folks do more. We’ve heard a couple of places do but those are the guys with the depth to do it.

Arkansas clearly doesn’t have the players to risk injuries in practice.

“We’ll adjust it after we look at film and see what the heck is going on and why we’re not tackling well,” Pittman said.

That’s hope it’s a technical issue the coaches can figure out. We’ve heard that for years around Razorback football.

Hope ain’t a plan, but Pittman better come up with something.