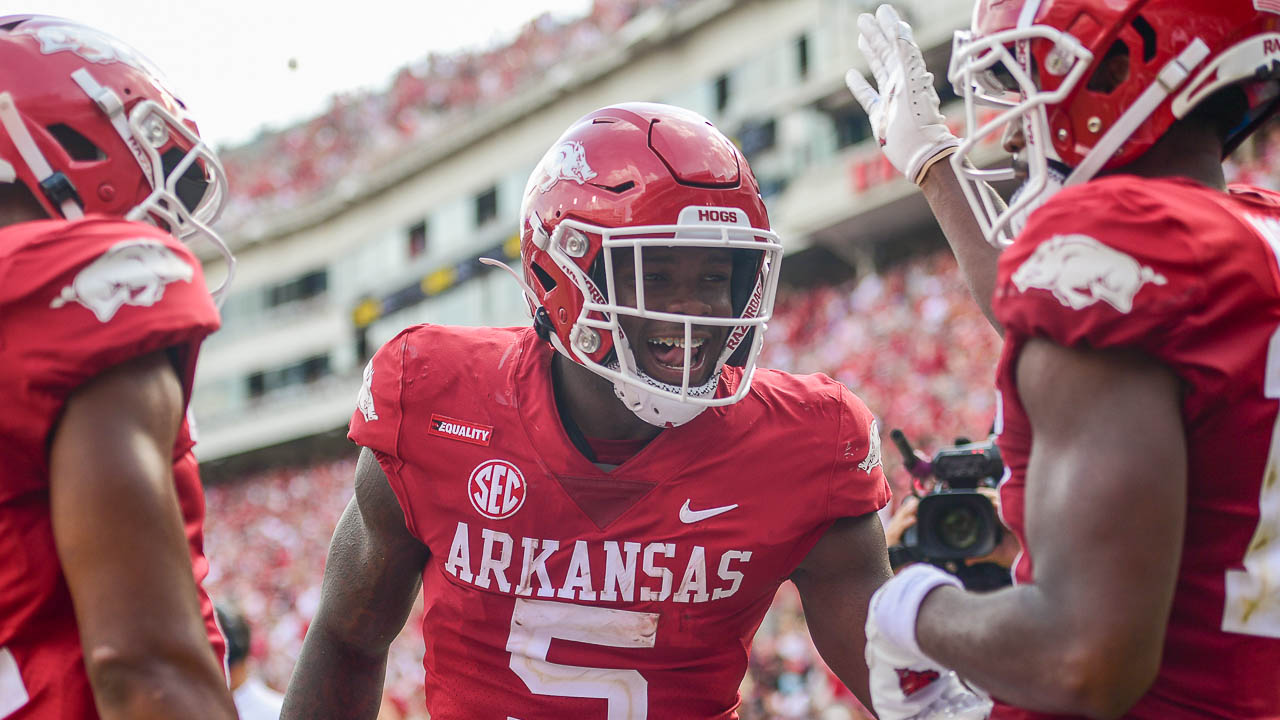 Has anyone recovered from yesterday?

No, not the celebratory partying we had after Arkansas’s football game against Rice. This question stems from the early-game apprehension Razorbacks fans unquestionably experienced early in the 2021 Week One contest.

Oh, you did not get to listen or watch? Or perhaps you simply want to experience it again mixed with the thoughts of a humble opinion piece contributor? Whatever your reason, wait no longer.

A good friend of mine messaged asking if KJ has regressed. My initial thought is we need to give him and his nerves time to settle, but, honestly, I am worried.

He immediately scores on a 34-yard rush.

Arkansas opens the season with a 7 – 0 lead.

My friend later messages and this time states, “I might have spoken too quickly about KJ. He’s doing fantastic now!”

No offense to my old compadre, but they probably noticed I quit responding. Moreso, on my end, I placed an emphasis on not even opening their digital musings. Superstition was at a premium.

The offensive line is not doing a good job in pass protection. The run blocking is grading out as moderate, but I would not say they are also setting the unbiased football fan’s world on fire.

The defensive line is not getting any penetration. This is something upon which they must perfect and perform better, especially against a lower-caliber offense such as Rice.

Somewhere in the middle of all this lack of execution Rice blocks a punt and misses yet later converts a field goal. Arkansas leads 7 – 3.

Two horrible penalties. One for targeting (leading to the election of Grant Morgan) and one for a late hit by Jalen Catalon.

This is a direct message to the NCAA: the targeting penalty has to be reviewed. I understand its purpose, and we all appreciate player safety; however, its interpretation and application for automatic ejection needs to be reviewed thoroughly.

Most fans, players, former players, and coaches all agree the penalty, as it is being applied, is taking away from the game. There needs to be a tiered level of what does and does not constitute an automatic injection.

No worries, NCAA, if you have questions, please check out “Twitter”. We have it all lined out for you.

Speaking of bad penalties, refs like to call that late hit “bump” out of bounds because they don’t understand what it’s like to be moving that fast. You cannot slam on the brakes. Good sell by Rice’s Jake Bailey to get Rice an extra seven (half the distance) and closer to a score.

A questionable pass interference call against Arkansas opens the door for an Owls’ touchdown.

My thoughts are similar to Arkansas Head Coach Sam Pitmman’s he expressed to Tera Talmadge as he left the field.

To summarize: KJ is struggling with the pass, we cannot execute, we are unable to drive the ball, we are not able to defend the short pass, and we seem suspect at stopping the ground-and-pound rushing attack.

I did not even mention the penalties nor the blocked punt.

Basically, we are out of sync, and our foe is Rice. My pre-disdain (if that’s even a word) for the season has my psyche heading to the showers early.

“Social media is mocking us, and I have too much pride in my state and this program for us to once again be the laughingstock of the SEC.”

Truthfully, I searched #FirePittman to see if anyone had already let go of the rope. To my surprise, I found nothing of the sort. It was then I had a good feeling about the second half.

A lot of people are talking high of our secondary, especially our corners; however, I am still not sold as my internal doubt was afforded validation through the long touchdown pass from Wiley Green to a wide-open August Pitre, III.

Rice extends its lead to 17 – 7 and shows its team dancing prowess on the sidelines.

The positivity I had gained at halftime has now dove to the bottom part of my stomach and sits there like a big Southwestern Conference rock.

Time for the offense to get on the board and officially start the 2021 season, right?

Wrong. The Hogs’ opening possession for the second half sputters into a turnover on downs on what looked like a manageable two-yard play when KJ was stuffed at the line.

Watching the white hat call and wait for the chains only heightens the anxiety of what did appear to be a very, very long 2021 campaign.

Remainder of the Second Half

[Enter a Sense of Pride]

Arkansas’s second offensive drive looks like a completely different team. With the lull of the first half still hanging in the minds of the Arkansas faithful, Jefferson throws what seems like our first down-the-field pass attempt. Tyson Morris (with the assistance of what should have been a pass interference penalty) makes a leaping one-handed catch that sparks not only the offense and the team, but the cardinal red donning crowd as well.

A few plays later, KJ (with the assist of tremendous blocking) runs the ball untouched into the end zone for his second rushing touchdown of the day.

Momentum is shifting… Or is it?

Arkansas’s defense looks to be on its heels again as Rice has a slow burn of a drive drawing near the goal line.

Fortunately, on 4th and 1, Owls Head Coach Mike Bloomgreen opts for a dagger into the heart of Arkansas instead of what would be a 35-yard field goal attempt. The Hogs swarm, and a 1-yard loss resulting in a turnover on downs in our favor.

The ensuing drive for the Razorbacks only musters a 34-yard Cam Little field goal for Arkansas, but with the game now tied, momentum is definitely rooting Hogs for the rest of the afternoon.

On defense, someone has to step up, and why should it not be the secondary upon which I had earlier found myself being critical?

Both Jalen “Freaking” Catalon and (as I like to call him) “Give Me Some Mo” Busta Brown answer what we can only imagine was an [Sunday morning PG edit]chewing at halftime.

Quick flash forward: With two and one interceptions respectively, mixed in with a great team play and great (Arkansas Defensive Coordinator) Barry Odom strategy, Rice never even drew a deep breath towards the end zone nor victory again. These bettered our lagging starting field position, enabled us to have easier scores, and changed the entire complex of the game.

Not to mention, Catalon has some decent moves with the ball en tote.

Our defensive line still needs more penetration. Apparently that liabilty did not get fully resolved at halftime. Rice’s enigma of quarterbacks have too much time to throw.

Our offensive line looks much better. They are allowing QB1 more time to throw, and even our run blocking looks better than the decent first half performance.

Subsequent to Catalon’s first interception, Telon Smith rushes in to give Arkansas its first lead in the second half.

Punts are traded back-and-forth between the two teams.

KJ then has what appears to be a 60+ yard touchdown scamper, yet a holding penalty brings it back but still within Rice territory.

Three plays and a penalty later, a great play featuring KJ to Morris for a 9-yard passing touchdown has now removed the pressure and nerves from the home sideline.

Catalon’s second interception, capped off by a short rushing score from Dominique Johnson, has everyone not cheering for the Owls feeling better on this Week One Saturday.

Some fans questioned whether or not we should have scored that last touchdown.

The answer (in my opinion): we looked sub-par on the field early. Adding on an extra seven points will look better on paper and in the minds of the players, fans, and (less importantly) voters.

Tyson Morris came to play, stepping up and carrying an entire game-shifting scoring drive on his shoulders.

Treylon Burks did not have a bad day, yet we all know he did not play his best. He will be better as his injury heals.

Rocket Sanders saw his first action as a Razorback. His initial carry was a good read for a first down. Welcome to the family, Rocket. No doubt your future is bright.

If the WWE ever decides it needs championship belts for three-man tag teams, without question the trio of Jefferson, Burks, and Rocket would be undisputed.

Trelon Smith will continue to get better as the season progresses. Along with his score, he quietly gained 102-yards on 22 attempts.

Cam Little looked good. His field goals and extra points were perfect, and his ability to consistently kick a touchback will be a difference maker this season.

There were inquiries of concern around the kick return team. Averaging 24.5-yards per with a bolting 45-yard return under his belt, I think LeDarrius Bishop has answered those question marks.

In fairness, I didn’t agree with the late hit call against Rice in the 4th quarter either.

Arkansas will host the Texas Longhorns in Fayetteville, Saturday, 11 September 2021. Kickoff is scheduled for 6:30 PM and can be listened to via HitThatLine.com and on the air at ESPN Arkansas 95.3 in the River Valley, 96.3 in Hot Springs, and 104.3 in Harrison-Mountain Home.

This is the first time Arkansas and Texas have met in the regular season since 2008.

The No. 21 Longhorns looked decent in new head coach Steve Sarkisian’s debut 38 – 18 win over the No. 23 Louisiana Ragin’ Cajuns. There is a lot of confidence building in Austin.

Texas will be even more of a challenge in the trenches. Our bigs have got to come to play.

Arkansas will be without the services of Bumper Pool for the first half due to a targeting penalty in the latter stages against the Owls. I find it hard to believe he is already a senior.

Texas, despite what their fans and staunchest bloggers will say, is beatable, and they will not find a cupcake on ‘The Hill’ come this Patriot Day. Arkansas cannot and must not come out flat.

See you on Saturday!