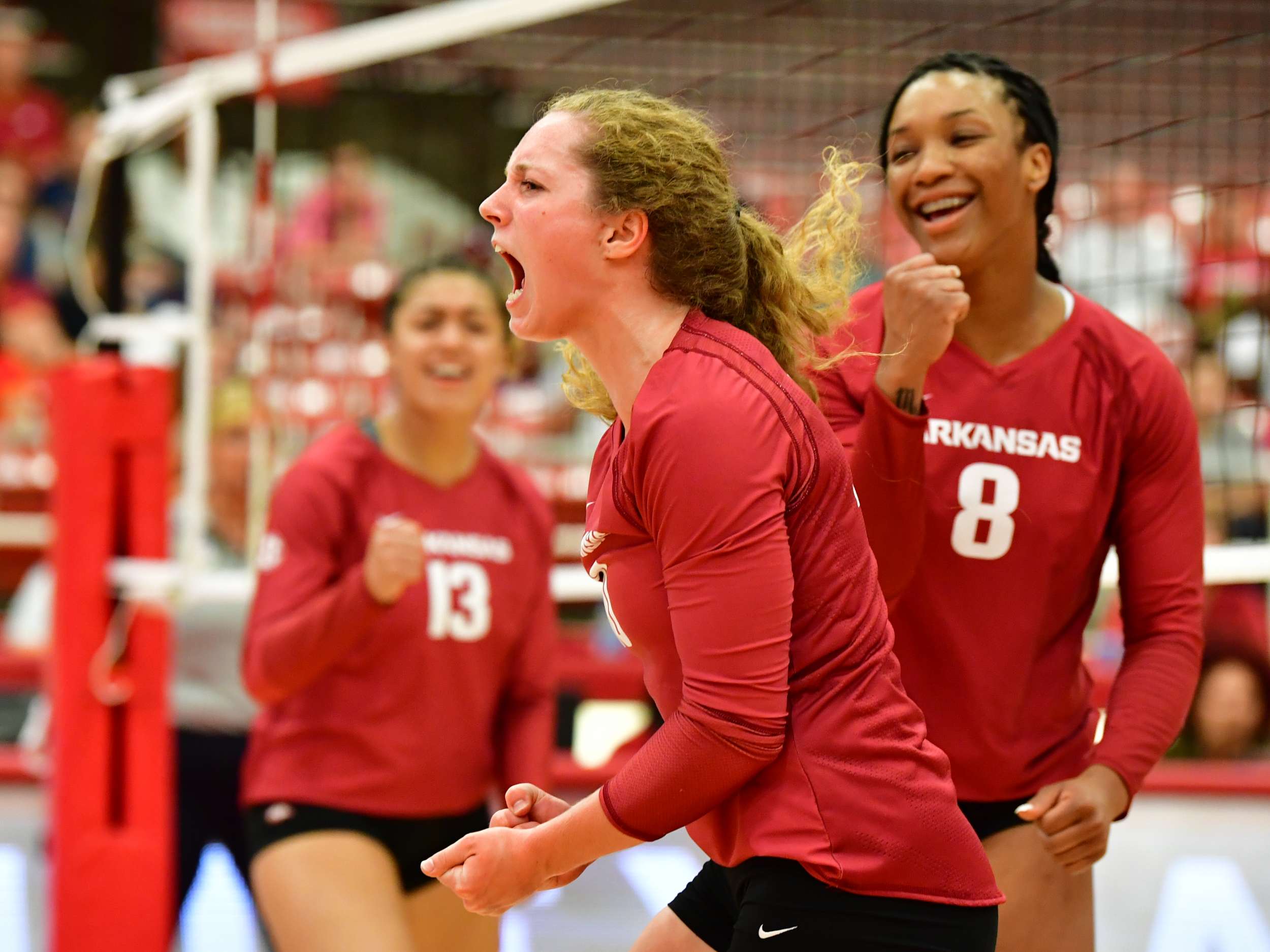 FAYETTEVILLE — Arkansas volleyball secured a pair of victories on Friday on the opening day of the Arkansas Classic.

The Razorbacks recorded straight set wins over Northwestern State earlier in the day before taking down Little Rock in front of a rocking crowd at Barnhill Arena.

The Razorbacks have one more match this weekend and will face Montana State on Saturday morning. After the Classic, Arkansas will hit the road to the west coast, headed to the SDSU/USD Challenge hosted by San Diego State.

Notables
Senior Rachel Rippee led all players with 18 assists.
The Razorbacks led for the entirety of the first and third sets.
Arkansas is now 4-0 all-time against Northwestern State.

Junior Liz Pamphile led the Razorback offense with nine kills to the tune of a .412 hitting percentage against the Demons.

Junior Hailey Dirrigl finished with a team high .625 hitting percentage through the first two sets after taking the bench due to an ankle injury.

In total, five Hogs saw the court for the first time since arriving at Arkansas, including junior transfer Devyn Wheeler who contributed three kills, and redshirt-freshman Maylin Garret to recorded six kills in 10 attempts.

Arkansas limited Northwestern State to an .084 hitting percentage, thanks in part to an overall team effort on the defensive front.

Junior Klaire Trainor led the Hogs with 11 digs, but three others recorded six or more digs in the win: Rachel Rippee (8), Jillian Gillen (6), and Gracie Ryan (6).

Gillen stayed hot throughout day one of the Arkansas Classic, helping lift the Razorbacks to a sweep of in-state opponent Little Rock.

Gillen accounted for 35 of the Hogs’ 100 attacks in the victory, recording 13 kills behind a .286 hitting percentage.

Arkansas saw impressive performances from two other newcomers as well, as Cartwright played a balanced game and recorded the first double-double of the season with 10 kills and 10 digs.

Wheeler was the most efficient Hog of the day, and when combined with her .727 hitting percentage, the trio swung a striking .353 at the net.

Pamphile remained reliable on the defensive side of the ball, putting up five blocks for Arkansas. Gillen, Cartwright, and redshirt sophomore Maia Stripp also recorded multiple blocks in the win.

Arkansas controlled the pace of the entire match, never giving up the lead and keeping the Trojans at bay as to never even tie the score again after a 9-9 set score in the first.

The Razorbacks led by as many as 15 points in the final set, thanks to a kill by Gillen with an assist from freshman Abbigail McGee.

The Razorbacks will return to Barnhill on Saturday morning for an 11 a.m. match against Montana State (1-1).

Admission is free to all fans, parking is limited and fans are encouraged to park in Baum East down Razorback Road and take advantage of the shuttle service.