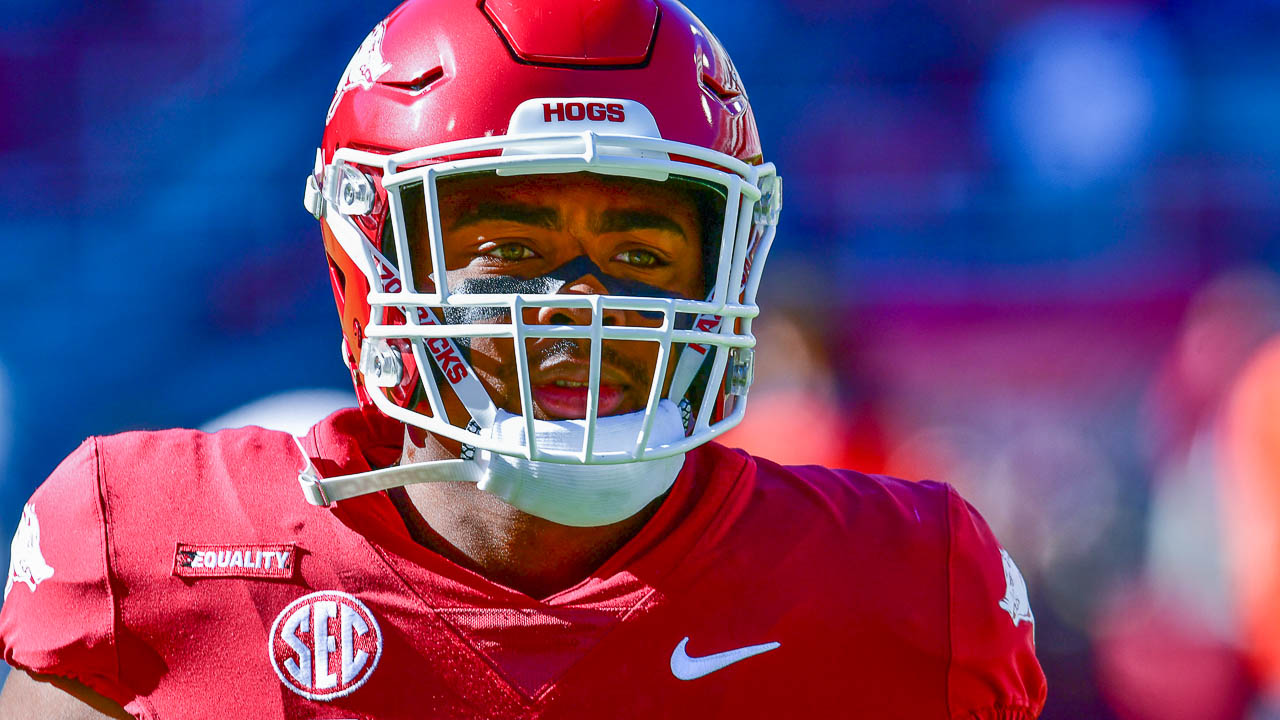 Burks was taken Thursday night in the first round of the NFL Draft in Las Vegas, the sixth wide receiver chosen, 18th player overall.

He was basically traded for former Ole Miss receiver A.J. Brown, who was disgruntled with his contract situation and the Titans made a trade with Philadelphia to get Burks, saving them $3.5 million, which will be the salary of his rookie contract that will be $15.6 million with an $8.5 million signing bonus.

The Warren Lumberjack has improved in all three seasons at Arkansas, finishing with 147 receptions, 2,418 yards, 18 touchdowns, and averaged over 16 yards per catch each season. He also ran the ball 38 times for 222 yards and a score, displaying impressive agility, speed, and quickness for a player his size.

One aspect of Burks’ game that can improve is cleaning up his route-running to create more separation. But he makes up for that by consistently winning contested throws and making spectacular catches.

A physical presence seldom seen at the position, Burks is a versatile chess piece in any offense due to his stature and athleticism that he will use to parlay a potential top 50 pick come April’s NFL Draft.

A stout frame that embodies much of what you look for in a running back much less a receiver. Outstanding after the catch where he uses strength and quickness to gain extra yards. Catches the ball naturally as evident by his use in screens and routes over the middle of the field. Never see him dance around and gets north quickly with a solid burst. Was used primarily as an F receiver in the slot but can work around the offense. Once he sees green grass, he possesses a second gear and is seldom caught from behind. A durable commodity, Burks is reliable in his availability and as a security blanket for his quarterback.

Not the fastest in terms of vertical route separation. A freaky athlete but not the most technical. Most plays are highlights after the catch rather than separation at the top of his routes. Could use more nuance in his route running. Works the middle of the field almost exclusively at times and not as prominent outside the numbers. May struggle against NFL corners that can match his physicality. Would like to see him tie his feet to his hands more often in his releases.

When building an offense in today’s NFL, “position-less” players have become a trend in many schemes. Between his build and playmaking ability, Burks fits this mold very well and has drawn comparisons to the 49er’s Deebo Samuel. Burks will be highly coveted and used in a plethora of positions on offense and as a returner on special teams. To become truly complete, time in a veteran wide receiver room will do him justice as he adds to the nuance of his game. Should Burks become more sound In his route running, his ceiling is immense. Anyone that can garner the big plays he did in a run heavy scheme against the best defenses in the country is worthy of the notoriety Burks has gained. Look to hear his name called early and often when he arrives on Sundays.

Treylon Burks attended Warren High School in Arkansas where he finished his career with 151 receptions for 3,403 yards and 43 touchdowns. In addition to being a four-year varsity letter winner in football, Burks also lettered in basketball and baseball. After high school, 247Sports ranked him as a 4-Star recruit, the 103rd-best recruit nationally, the 16th-ranked wide receiver recruit in the country and the 1st recruit in the state of Arkansas.

Burks committed to Arkansas over Auburn, LSU, Ole Miss, South Carolina, Florida State, Michigan and other schools. In 2019, he started 11 games as a freshman and finished with 29 catches for 475 yards, leading the team in receiving yards and being named to the SEC All-Freshman team. In 2020, Burks started nine games and finished with 51 catches for 820 yards and seven touchdowns. In both 2019 and 2020, Burks was named to the SEC Academic Honor Roll. 2021 was Burks’ best year yet, starting 12 games and finishing with 67 catches for 1,123 yards and 11 touchdowns plus 14 carries for 112 yards and another touchdown on the ground.

Burks is extremely well respected in the Arkansas program and after he declared for the NFL Draft and plans to skip the Outback Bowl, head coach Sam Pittman was quite vocal about Burks’ importance to the team, “Losing him, we lost a lot of offense. We also lost a very good leader. It’s going to take a lot of people to replace Burks. He was our go-to guy. He was our big-play guy. Any time we got zero coverage, man coverage, everybody in the place knew he was going to get the ball.”

It’s paramount to note Burks’ injury history, suffering a “potentially catastrophic” knee injury in high school that “almost cost him his football career”. Burks missed one game in 2020 due to an undisclosed knee injury and it is unclear if he re-injured the same knee. Additionally, Burks has battled through an undisclosed foot injury which he suffered in fall camp of 2021.

“Using a gun takes the fun out of it. Having a knife, it’s more of a thrill that you’re getting up on a wild boar that could kill you. Honestly it’s just a thrill being out there with your friends and family and having a good time. I would say I’m not scared of wild game like some people are. Like bears, I’m not scared of them. I have respect for them. Going out there, I’m in their habitat.” — Treylon Burks on his hunting hobby