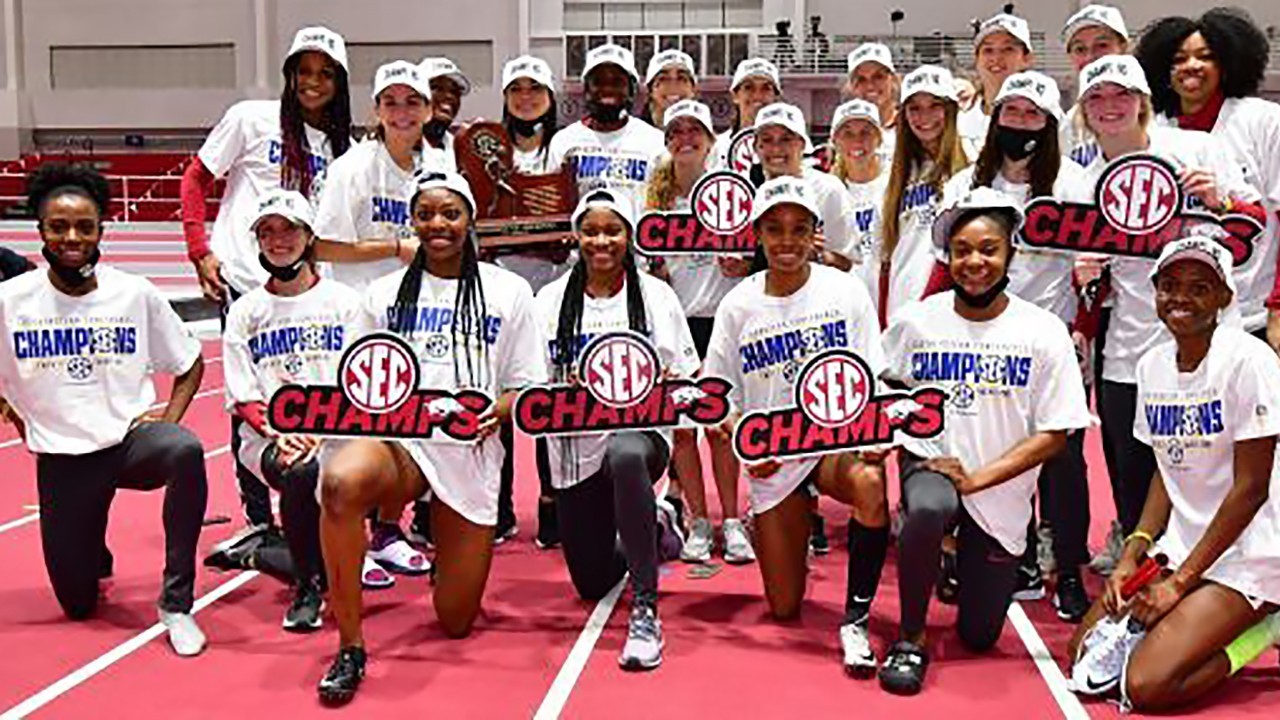 In winning a seventh consecutive SEC Indoor championship, No. 1 Arkansas totaled 141 points and bettered the conference field by 60 points.

Since the league expanded to 14 teams in 2012-13, this total for the Razorbacks was the second highest winning score, just 10 shy of the 151 points Arkansas scored in 2019, the last time they hosted the SEC Indoor meet.

“It takes a village and it was very much a combined effort,” said Arkansas women’s head coach Lance Harter. “Our combined effort is a pretty formidable foe, to say the least, as a team. What we’re super excited about is that we were able to get through it relatively happy.

“We had some great breakthrough performances and added a few more individuals to the national lineup. We’ll just look forward coming back here in two weeks and see what the NCAA has to offer.”

The final day started with Krissy Gear producing the lone individual win for the Razorbacks as the claimed the mile after placing second in the race last season. Gear became the fourth consecutive Arkansas runner to win the SEC Indoor mile, joining Nikki Hiltz (2018), Lauren Gregory (2019) and Carina Viljoen (2020).

Arkansas capped the stellar day with a school record in the 4×400 relay, which also broke the meet record set by LSU in 2005 and makes the Razorbacks the sixth fastest school in collegiate history.

The performance bettered the UA record of 3:28.70 set at the 2015 NCAA Indoor and included Daina Harper, Sparkle McKnight, Chrishuna Williams and Taylor Ellis-Watson.

“That’s not our A team in the relay,” noted Harter. “Because of the tight schedule, Coach Johnson had to be creative. Everyone of them rose to the challenge. To knock off our school record, which is a special time, I’m super excited because the kids just did a fantastic job of rising.”

Ten Razorback points were scored in the 60m as Jada Baylark jetted to another career best of 7.18, moving into sole possession of the No. 2 mark on the UA all-time list, while Tiana Wilson (7.32) finished sixth.

“It will be a tall order to try to defend both,” noted Harter of having the NCAA Indoor and NCAA Cross Country Championships within a span of four days in March. “The indoor has always been our priority, and we’ll look forward to that in two weeks.

“There are some great competitors from the SEC who will be rivals for us. Then, as we go from coast to coast, there are many a great team out there.”

This marked the eighth time for Arkansas men and women to sweep SEC Indoor titles since joining the league and it’s the fifth time to accomplish the feat since 2012-13 when the conference expanded to 14 schools.