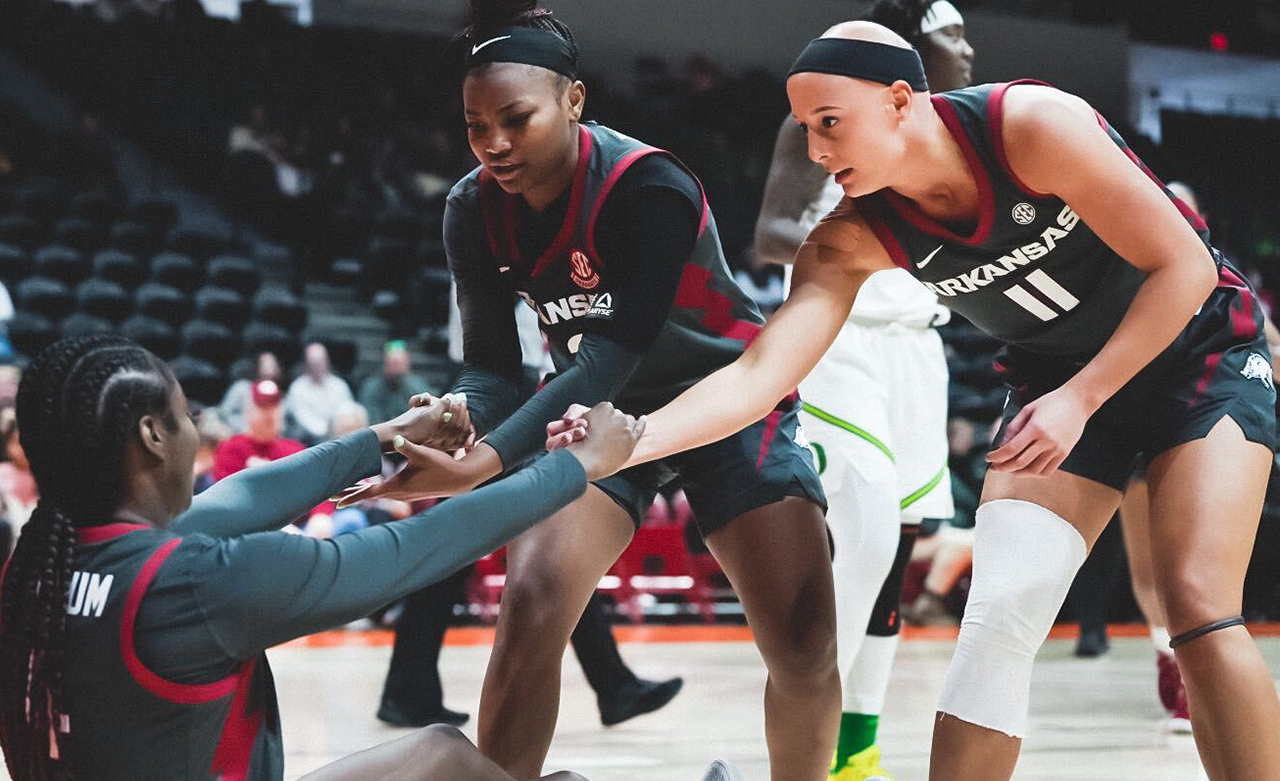 No. 16/15 Oregon put the Razorbacks’ undefeated start to a halt Tuesday afternoon at the San Diego Invitational.

In a highly competitive game, the Hogs led by seven points with 8:30 left in the game, but Oregon made big shots down the stretch and the Hogs didn’t make a field goal for over six minutes, leading to an 85-78 loss.

Samara Spencer continued her great play with her first career double-double off 20 points and a career-high 10 assists, while Erynn Barnum also logged a 20-piece with 22 points and nine boards.

Makayla Daniels helped the Razorbacks get on the board first with a jumper, but after a scoring drought for over two minutes, Oregon took the 10-4 lead with dominance in the paint halfway through the first quarter.

Barnum scored two straight baskets to pull the Razorbacks within a bucket at the media timeout, 10-8, and then Spencer tied the game with a layup. Barnum was on fire, registering back-to-back 3-pointers, while Rylee Langerman knocked down one of her own.

Oregon would tie the game at 22 following a 5-0 run, but a Barnum layup and Langerman free throw put the Razorbacks up at the first break, 25-22. Barnum logged 14 of her 22 points in the first frame.

Arkansas didn’t score for the first four minutes and some change of the second quarter until Barnum logged her third 3-pointer of the game and Daniels added a layup. At the media timeout, the Razorbacks were ahead, 30-24.

Oregon came out of the media timeout with a 5-1 run, but back-to-back Maryam Dauda baskets put the Razorbacks out of a hole, forcing Oregon to take a timeout with Arkansas ahead, 35-29. Oregon’s timeout was beneficial, as a 6-0 run tied the score at 35 with a minute and some change to play in the half.

After a handful of fouls called on the Razorbacks in the final few minutes of the half, Oregon was able to shoot some freebies to take the lead. A Spencer jumper closed the Razorbacks in within a point, as the Ducks led 38-37 at the half.

Daniels helped the Razorbacks go back ahead with a layup out of the half, but after a scoring drought for over two minutes, Oregon had the five-point edge. A 3-pointer by Daniels inched the Razorbacks ahead by two, 44-42, four minutes into the second half.

Just before the media timeout, Daniels tied the game at 48 with the Razorbacks’ eighth of 12 triples of the ballgame.

The game tied twice more until Arkansas closed out the quarter on a 7-2 run courtesy of Saylor Poffenbarger’s layup and 3-pointer, as well as Dauda’s second chance layup as the buzzer sounded. Arkansas led 59-55 going into the fourth quarter.

Langerman drilled down a 3-pointer for Arkansas’ first score of the fourth quarter.

Oregon cut the lead to three on the next possession with a basket, but Arkansas sparked a 4-0 run thanks to a Barnum free throw and Daniels triple off a Ducks’ turnover.

Oregon called a timeout and Arkansas had the 66-59 edge with 8:22 remaining in the game. The Ducks outscored the Razorbacks 30-19 in the fourth, while holding the Razorbacks to zero field goals for a six-minute stretch.

Arkansas suffered its first loss of the season, 85-78.

• Barnum led the Razorbacks with 22 points, her third 20-piece of the season and in her career. She nailed down a career-high three 3-pointers, while adding nine rebounds

• Spencer logged a near triple-double off 20 points, a career-high 10 assists and seven rebounds, while playing 39 minutes. She became the first Razorback since Destiny Slocum in 2021 to log a double-double in points and assists

• Daniels continues to make a big impact in her return to the floor with 15 points, nine of those points coming off 3-pointers and three boards

• Dauda was also big off the bench with six points

• Chrissy Carr and Emrie Ellis were the lone Razorbacks with a positive +/-, while Poffenbarger and Dauda were even

Arkansas will play No. 3 Ohio State or South Florida on Wednesday at 3 p.m. CST to wrap up the San Diego Invitational and non-conference play.