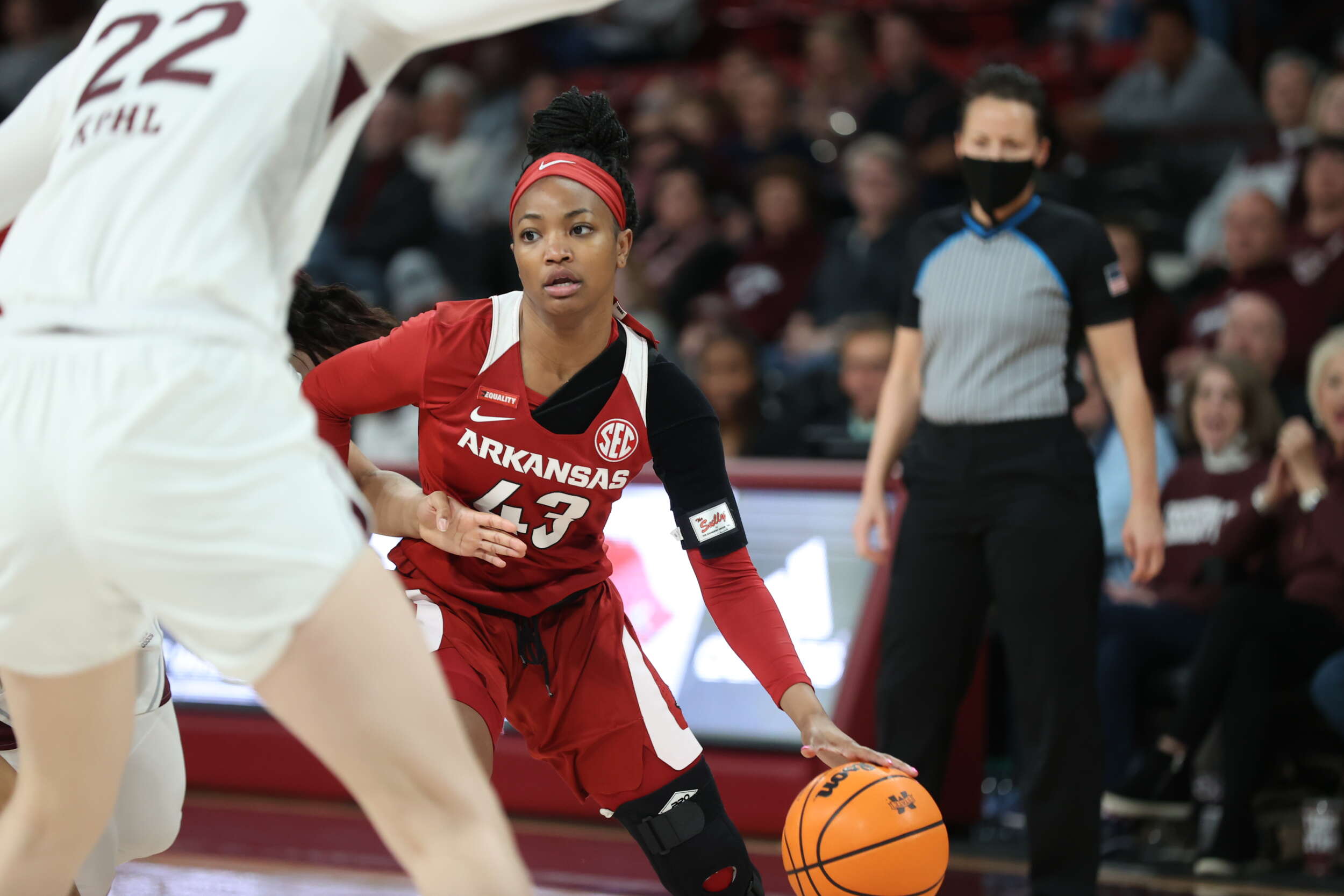 STARKVILLE, Miss. — Arkansas finally got one of these games at the end of a brutal schedule to go their way.

“To end the stretch that we had with a win just encapsulates how our season has gone,” Razorbacks coach Mike Neighbors said after an 87-79 win over Mississippi State.

It’s been a tough end of the season with four straight losses before closing out with a win over a pesky Bulldogs’ team that couldn’t seem to miss a lot of three-pointers.

After feeling “gut-punched” after a one-point loss to Georgia at home Thursday night, Neighbors let the players take over preparations for the road game without a real day to practice.

It worked out well.

The win over State gave the Hogs an eighth-place finish in the SEC headed to the tournament next week. They will play a familiar opponent on Thursday in Missouri, who clinched the No. 9 seed with a win over Florida.

Against the Bulldogs, the Hogs’ offense had six different Hogs reach double figures.

This was a fast-paced game all the way through, and the two offenses scored with relative ease in the first two quarters.

Arkansas was finally able to gain some separation right before the halftime break with a quick 7-0 run, including five straight points from Daniels. The Razorbacks entered the break up 44-39.

Mississippi State came out of the locker room hot, going on a 7-2 run of its own to tie the game at 46.

It was a seesaw affair once again, and the Dawgs even took the lead back with 5:10 to play in the third quarter.

The Hogs put together another big run to close the quarter, going on a 10-4 spurt to close the penultimate frame. The Hogs led 61-56 after three.

The Razorbacks were able to hold on due to some clutch plays down the stretch. Erynn Barnum was excellent in the fourth quarter, scoring eight of her 10 points in the quarter.

She was also four of four from the free throw line down the stretch. The Bulldogs were able to cut the lead down to four with 1:38 to play, but the Hogs ended the game on a 7-3 run, clinching the eighth seed and the season sweep.

• Samara Spencer led the team in assists, matching her career-high with six of them.

• Goforth had three more blocks in the game, her ninth game this year with three or more.

• Ramirez led the team on the glass, pulling down eight rebounds. She also had a team-high four steals.

• Barnum’s 10 points marked her first game in double-figures since November 28 against Belmont.

Arkansas is onto the SEC Tournament, where they will meet Missouri in the 8/9 game. That game will tipoff at noon on Thursday, March 3, and will air live on SEC Network.