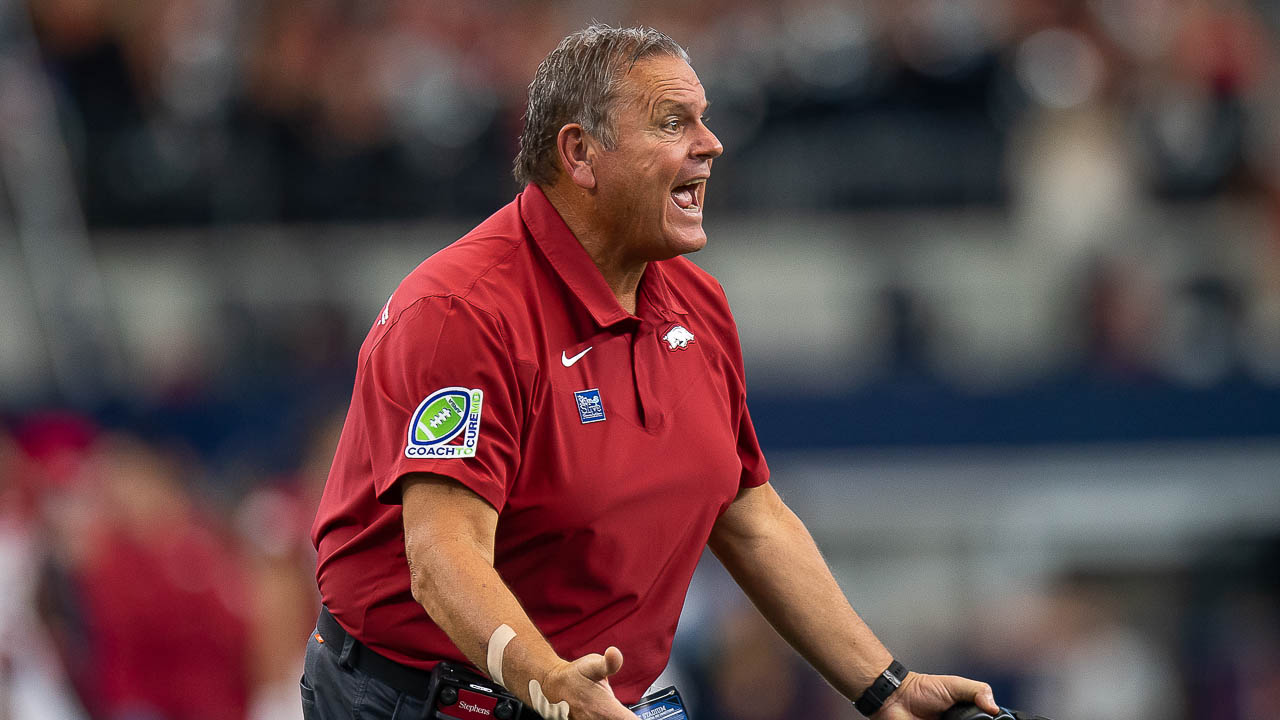 Always being right, wearing fancy jewelry to a Friday night football game, and Barry Manilow. What do these three things have in common?

Unless you grew up without even the slightest amount of audio options from FM radio, they are all three over-rated.

Falling in line with Arkansas propelling itself into the polls, some might venture to state the only ranking the No. 8 Razorbacks deserve is right at the top when it comes to being over-hyped.

These naysayers may further their doubts by discerning we are a cleaned up Cinderella with whom poll voters have found an attraction as the world tries to find a positive outside of the constant negativity.

Or perhaps they are sorely mistaken and we are just that damn good.

Whatever the reason, Arkansas takes to the road to face the No. 2 team in the nation, the Georgia Bulldogs

And if critics of the Hogs are perchance correct, ESPN is not showing any hints of buying into it simply for the reason they have chosen to broadcast their flagship football show “ESPN Gameday” live from Athens in preparation for a Top Ten match-up.

Razorbacks fans are taking notice, and recent speculation over how great this team can be is running widespread throughout the Natural State.

Considering how long we have been somewhat of a laughingstock within sports social media mixed in with the circumstance our dry-spell increases our collective blood pressure every time we encounter two people riding together on a motorcycle, who can blame us?

In fact, a good friend of mine called after the victory over Texas A&M this past Saturday night discussing possible scenarios of Arkansas playing in the BCS. I pondered JoseDabdub’s [dab-doob] well-constructed verbal musings pertaining to the imaginative scenario of the Razorbacks winning out with an exception of losing to either Georgia or Alabama.

While I envied his optimism, being a man of superstition, I feared jumping into such speculative conversation via internet publication would not only create a jinx for this Saturday but also subject me to more ridicule than Chad Morris applying for a cheer coach position at TCU.

Therefore, I decided to let that hypothetical scenario abide; however, my mind pondered onto another form of “here is how this should play out” in a veiled attempt to project which team will emerge victorious.

With both teams starting the season at 4 – 0, different paths have placed Saturday’s foes into the nationally televised broadcast. Let us look at a how Arkansas and Georgia have fared to this point in the near middle-aged season via a win-by-win comparison.

The following lists show each team’s opponents for Weeks 1-4. Respective weekly rankings are listed in parentheses.

Clemson and Texas A&M – Both teams came into the 2021 season ranked with new quarterbacks.  Clemson started at No. 2 and only lost to the Bulldogs thanks to an interception returned for a touchdown. Since then the wheels have come off, and a close game against Georgia Tech and a loss to North Carolina State have everyone in orange hugging their Trevor Lawrence dolls a little more closely at night. The Aggies have looked like a great team despite injury to their starting quarterback minus a victorious trip to feisty Colorado and of course the loss to the Hogs. MIV: Arkansas

South Carolina and Texas – The Gamecocks looked decent in their first two games but not so much their last two, including a loss to Kentucky at Williams-Brice. The Longhorns have looked and played well anytime the have played a team not named Arkansas. They even defeated a then-ranked Louisiana Rajun Cajun team in Week 1. MIV: Arkansas

UAB and Georgia Southern – Outside of their loss to Georgia, the Blazers have been impressive in two dominate performances over Jackson State University and North Texas. The also went on the road and defeated the same Tulane team which had Oklahoma on the ropes in the later rounds. The Eagles have lost three out of four with their lone victory a hosting of Gardner-Webb, but that was by a meager 5-points. They did hang with the aforementioned Rajun Cajuns though, so there’s always that bragging right. MIV: Georgia

Vanderbilt and Rice – Vanderbilt surprised me when they won at Colorado State. Their other three games have been blowout losses at home, including one to East Tennessee State and another to Stanford. For the Owls, after giving Arkansas a scare in the first half of Week 1, Rice has been less than stellar. They have actually been outscored by their opponents (Arkansas, Houston, Texas, and in a win against Texas Southern) 174 to 72. MIV: Push

Written lists such as the preceding are nothing more than hypothetical projection. What is the cliché, “That’s why we play the game?”

The Razorbacks do not need any validation. The victories over solid Texas and Texas A&M programs bolster the Hogs rising towards the rafters in the national limelight.

Bulldogs coach Kirby Smart has one of the top defenses in the nation. Arkansas quarterback KJ Jefferson must be hopeful his offensive line can successfully execute in both run and pass blocking schemes.

If I ever open a Mexican restaurant in India, I will name it “Jose Dabdub’s.”

Georgia plays Auburn next week. With the attention behind this game the chances of them overlooking us is nil.

Many Bulldog players are anxious to play against their former offensive line coach, Sam Pittman. And, well, if you are not familiar with the latter, you clicked on the wrong link.

For clarity, this entire piece was not concocted solely to associate the name Morris with the word “overhyped”, yet I figured psychological nature would easily run its course.

For Arkansas to win it will have to play perfectly in every aspect, especially in keeping the “we weren’t in the right mindset” penalties to zero. In the dating world, those would be dealbreakers.  In the football realm, those will be a loss to No. 2.

Some are wondering if Pittman’s familiarity with Kirby Smart and Georgia will provide Arkansas with an advantage. Find out next week when you will hear the writer say, “Yeah, well, that was a typo.”

The Hogs are amped, confident, and ready to go. Oh, and they won the above “MIV” game. Theory aside, they will make a statement of validity.

What’s the score, Andy? I seemed to have lost track. Andy: You are welcome.

Oh, and I appreciate the “bone” you threw me last week. Andy: We are all judged party by how we help those less fortunate.

At the end of the season are you going to go all Isaiah Spiller on me and blame it upon the mistakes you made rather than give me mad props for my accuracy? Andy: Arkansas hired Chad Morris, proof that unexplained things happen.

(8) Arkansas at (2) Georgia – GAME OF THE WEEK: So not only once or twice have the Razorbacks been given GOTW honors, but this makes the third time in five weeks. In respect to that number I give you my prediction: Hogs by 3.

Tennessee at Missouri: This game looked slightly better in the preseason. It will still be a decent match-up, yet the Tigers are at home, and that will be the difference. Mizzou by 2.

(12) Ole Miss at (1) Alabama: If Lane Kiffin can get his Rebels pumped up for only a single game this season, this had better be the one. But it’s in Tuscaloosa, and Nick Saban will be across the field walking holes into the turf. There will be no “traditional” upset. Bama by 18.

Troy at South Carolina: If South Carolina does not win this game expect there to be an opening in the Gamecocks’ Athletic Department somewhere. ‘Lina by 20.

(10) Florida at Kentucky: The Wildcats still have high hopes of contending for the East… You know, the other SEC Division. Their next step comes in the form of the team with which they are going to contend for first place. It won’t be this week, but someday they will beat Florida. Gators by 17.

Mississippi State at (15) Texas A&M: The Bulldogs are trying to find their inner pirate, but they seem to be high-centered on a desert island. The Aggies are trying to get the taste of AT&T field turf out of their mouths. A&M by 7.

UConn at Vanderbilt – SLOPFEST OF THE WEEK: Hold onto your bets and cover the eyes of your young students of the game, the Commodores may end their losing streak at home against the winless Huskies. Vandy by 15.

(22) Auburn at LSU: This one may be pretty competitive as these teams seem to match up pretty well. While Auburn is better, the LSU players seem to still have faith and a sense of sureness in their coaching staff. Sadly for the Bayou Bengals, Death Valley will see the home team lose. Auburn by 7.

That’s it for this week. Check back for all the highlights from Saturday’s game.

Razorback football is fun again, and excitement is always under-rated.