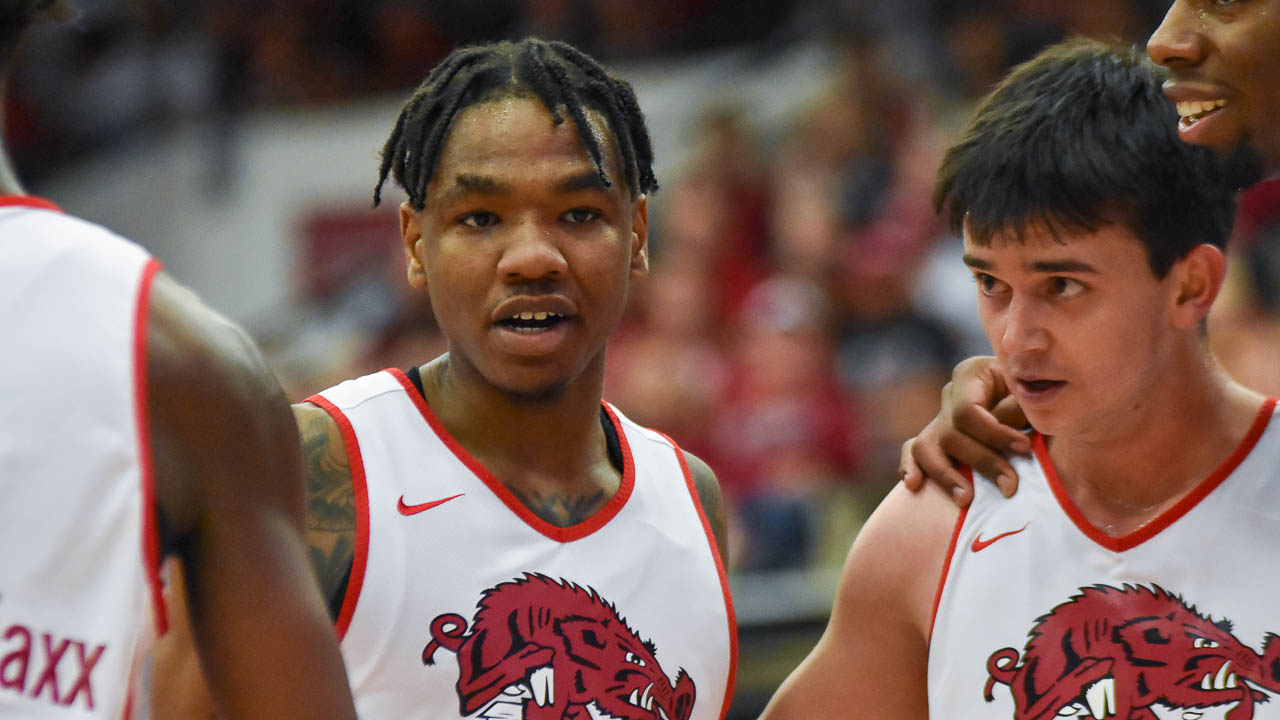 The Red team jumped out to a 13-0 lead to start the annual Red-White Game, played before a full Barnhill Arena crowd Sunday afternoon but a game-game 22 points from JD Notae brought the White back.

The White team won the second, third and fourth quarters for a 74-63 victory.

The game featured four, eight-minute quarters and some pre-game entertainment from the Razorbacks with Trey Wade winning the talent contest.

Notae, the 2021 SEC Sixth Man of the Year, also produced game highs in assists (6) and steals (4). Jaxson Robinson and Chris Lykes added 14 points each for the White, while Jaylin Williams, who only played six minutes in the second half, scored 12 points.

Stanley Umude led the Red team with 16 points and a game-high 11 rebounds. He added four assists as well. Davonte Davis also scored 16 points for the Red while Connor Vanover and Au’DIese Toney contributed 10 points each.

• Davis scored the first points of the game as his Red squad raced out to a 13-0 lead.

• Williams broke the scoring drought for White as part of an 11-3 run to make the score 16-11 and force a Red timeout.

• Red led 21-13 at the end of the first quarter thanks to seven points from Davis. Williams led all scorers in the quarter with eight, including a pair of triples.

• Late in the second quarter, Cade Arbogast made a 3-pointer and Notae had a fastbreak layup to cut the deficit to one, 31-30.

• Kamani Johnson later had a putback dunk for the White team’s first lead, 32-31 with 35 seconds left, which proved to be the halftime score.

• The White made six straight during the run.

• Notae led the White with seven points in the quarter.

• Down seven to start the final quarter, Vanover started the fourth quarter with a dunk to get the Red to within five.

• Later, Davis got a steal and an old-fashion 3-point play on a fastbreak to trim the Red deficit to three (59-56).

• Notae and Lykes each scored five points during the decisive 15-2 run. Notae finished the quarter with eight points and Lykes seven.

Up next, Arkansas will host East Central University in the first of two exhibition games on Oct. 24 (Sunday). Tip off is set for 3 pm in Bud Walton Arena.