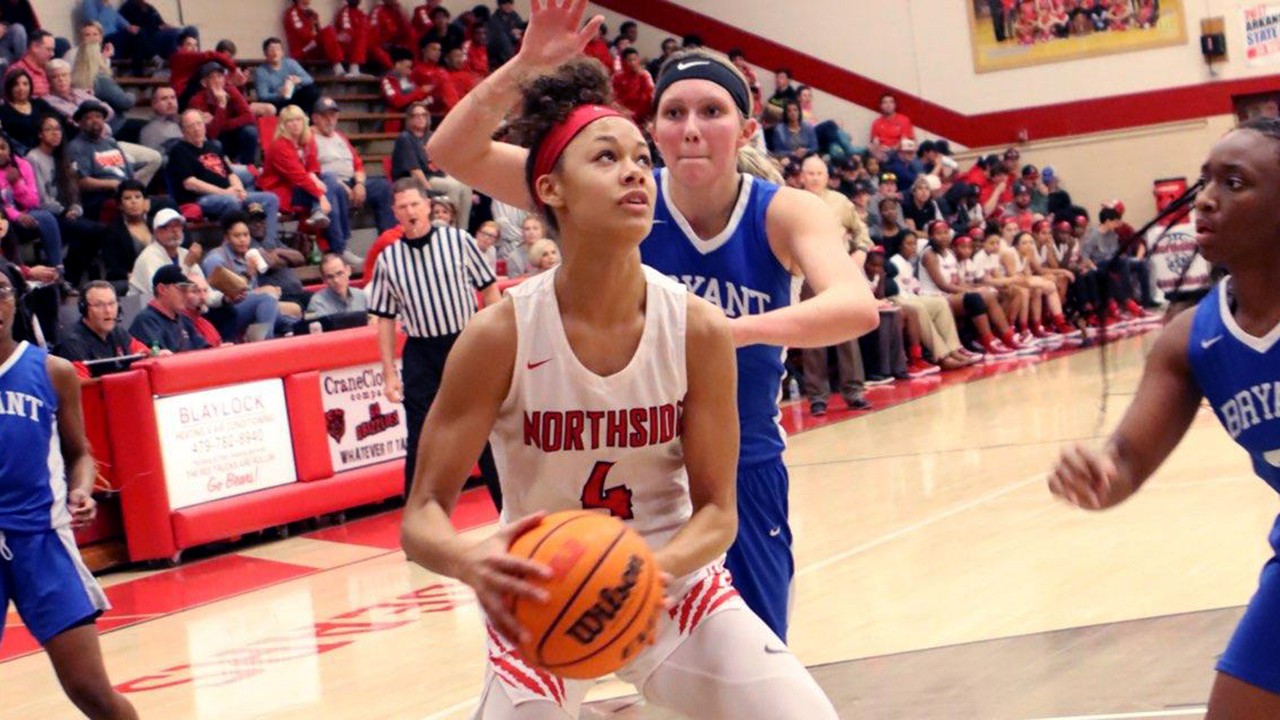 “National Singing Day is a time for our future Razorbacks to be rewarded for all the sacrifices they have made to get them to this day,” Neighbors said in a press release. “It is a day for them to share thanks to those family, friends and coaches who have helped make this day a reality.

“Their accomplishments are amazing, and evaluator rankings will always be a part of every recruiting conversation, but the journey is so much more important than the statistics.

“Emrie, Ashlyn, Samara and Jersey, like the other 1,500 Division I signees at the other 350 Division I schools, are great players, great students and great people. But these four are drastically different in that they chose to be Razorbacks.

“It never truly felt like we recruited these kids. I need to thank our amazing staff and their families, too, for everything that goes into the relationship building that drives our recruiting. It’s a 24/7/365 commitment to get commitments.”

“Rumors are traditionally associated with negative things. Growing up in a small town, that had certainly been my experience. Someone at church would hear details of something that happened the night before, and that story would be retold by someone at the store onto someone else at the Pizza Barn that night. By Monday at school? It was all over. Well, this rumor ends up with a future Razorback instead of a viral story.

“Lacey Goldwire, our former recruiting coordinator, began hearing tidbits of a 6-3 shot-blocking machine in southeastern Oklahoma near where she had attended college. Former classmates of hers at East Central College were telling tales of a triple-double magnet, who was blocking 20 shots a game. Rumor had it coaches of the region’s top programs were charting a course to Vanoss High School to see Coach Jon Hurts’ prospect.

“Luckily for us, Hurts was one of Lacey’s classmates. Lacey set a September date to evaluate this now somewhat mythical prospect on our recruiting board. We use the term mythical because in 2019, it is unprecedented for a 6-3, extremely skilled, great student with a great family to be unknown. How could a player like that be a mystery to evaluators across the country? We would learn that she had broken her wrist exactly three minutes into her first summer game entering her freshman summer. She chose not to play that next summer. Could we really be this lucky?

“The practice we attended started at 3:30. By 3:45, I had texts saying: rumors aren’t right. Dreams of a future Hog shot-blocker sank. Then a second message: She’s even better than everyone said. The second text led to a visit to campus for a football game with her family and friends. Our luck continued – her family loved the Razorbacks, and she even drove a Razorback red car. Before they left, she had a full-ride offer. Two months later, while attending the Arizona State game in Bud Walton Arena, Emrie committed.”

“Fast forward to the next summer, where we are in a suffocatingly hot gym in Frisco, Texas, perched in folding chairs along a baseline to catch Rylee Langerman and her Oklahoma Swarm team play. Rylee was playing point guard, and had a special connection with one of her teammates. The duo kept finding each other open for threes, kept playing the give-and-go game. They also helped each other on defense. As a result, their team pulled a major upset. Since Rylee was already in our sights, I hadn’t thought to look at the names of other players on the roster. So, while at lunch that day, I kept asking Coach Love to find out more about this kid on Rylee’s team. I told her she simply made everyone on the court better. She cared about winning. She listened to her coaches.  She had great length on the perimeter, and I swear, every time she shot the ball I thought it was going in, even from long, long range. After lunch we went to separate gyms, but I told Coach Love to check her roster for the name. About halftime of my next game, I got the text from Coach Love: Ashlyn Sage. Turns out Pastor James had an eye for talent after all.

“I immediately called Rylee’s parents, RJ and Melissa Langerman, to confirm my suspicion – that Ashlyn was just as good of a kid as she was a basketball player. A few phone calls with Ashlyn and a family trip over the border for a Razorback Football game, and we were convinced: Ashlyn needed to be a Razorback.”

“Ever since the events of 9/11, we notice most recruits sign with schools that are either a tank of gas or direct flight away from home. Like all things recruiting, it’s not an exact science with absolutes. One thing that then becomes an absolute if you recruit out of your area, though, is that it’s 100 percent due to a strong relationship. One that is built over time, and full of trust. Fortunately for us, that is exactly what we have with Obel Cruz, Miguel Diaz and Paul Torres of the Miami Suns, one of the original grassroots girls’ summer programs to focus on growing opportunities for aspiring hoopers.

“Prior to the spring evaluation period of 2019, Associate Head Coach Todd Schaefer got a phone call from Diaz about a new player in their organization. We had always told them to call us on players that fit our system and might be open to leaving the south Florida area. The Miami Suns coaches felt strongly that this player and her family would strongly consider Arkansas. Coach Schaefer arranged his fall evaluation schedule to see her the Nike EYBL event. It was immediately evident that 20 years of friendship had helped develop a sense of what we were looking for: a threat to score from deep, from the midrange and at the cup; the ability to guard four positions; a family support system that stressed academics; and the ability to be coached.

“Through a series of spring phone calls, we turned a relationship with her coaches into a relationship with her and her family. After a summer of following her all over the country, we offered her. With it, her mom arranged a visit to campus for a September football game. There was an instant connection between her and our program. With that comfortable feeling, and having been in Fayetteville, Samara Spencer committed to being a Razorback.”

“Phone calls to the basketball office about ‘5-6 guards who love the game’ are what we call ‘10-12’ – a dime a dozen. So when this particular call in the summer of 2017 came in, it was a pretty typical day. But, like with all calls that people are kind enough to make, we followed up on it. After some work, we found the team, the Missouri Phenom-SUG, to be playing in Chicago, on court 56 of the Nike event. She was being coached by Fayetteville High School legend Nick Bradford, so we made arrangements to evaluate this one prospect.

“The game began, and our prospect didn’t start. First round of subs come and go, and she’s still on the bench. Typical of a ’10-12’ call. Many times, this is where we would find another game to watch. But we stayed and shortly before halftime, we got our first look at the 5-6, 85-pound guard we’d come to see: Jersey Wolfenbarger. And my first note? 5-6?! Maybe!’. Then, she started playing. She was fearless attacking the basket, challenging those who had matured earlier than she had. She was relentless as she pinballed off bodies and fought (unsuccessfully) for rebounds and loose balls. She spent more time on the ground than she did on her feet during that first evaluation. My final note read: Colt? Thoroughbred? We watched the rest of that summer and learned she was moving to Fort Smith, Arkansas, and would be playing for Coach Rickey Smith. Having recruited and coached his former players at Tulsa, Colorado, Xavier and at Washington, we knew she would be challenged and developed to her fullest potential.

“With the way NCAA rules are, we see things early, but can’t have conversations or contacts until much later. The Colt/Thoroughbred question was answered the minute she and her family stepped on campus – this girl was a Thoroughbred. Her words were beyond her years, expressing to our staff her dreams, and the blueprint she had created to help get her there. In only 15 years, her mothers had raised a young person that was mature unlike anything I’d ever seen. On top of this, Coach Smith told us she worked harder at the game than any player he had ever coached. That, paired with what we had seen on the court, was enough – we offered all 5-9, 98 pounds of Jersey Wolfenbarger a scholarship to be a Razorback.”

“We hope all Razorback fans will join us in welcoming all four of these young women to HogNation. We wish them the best in their senior seasons and can’t wait to see them in the Red & White. Thanks to an amazing staff for years of hard work in making this class so special.”