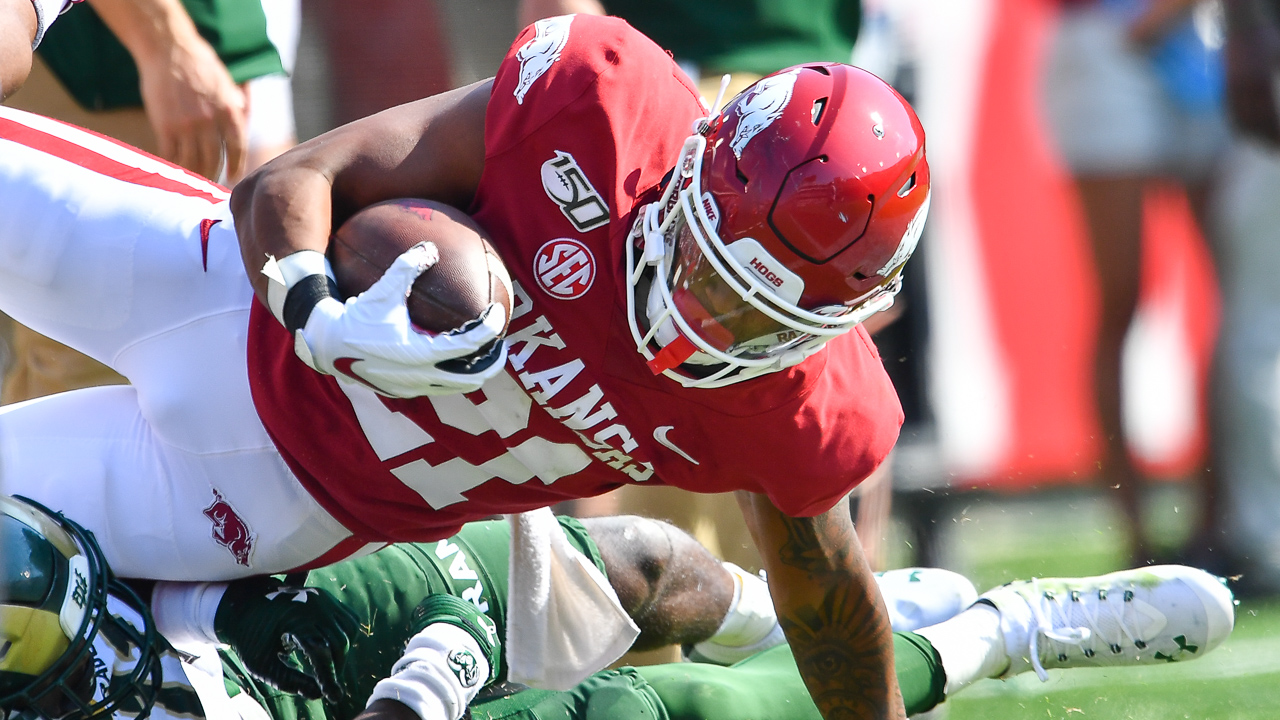 Arkansas added two late scores on a defensive scoop-and-score and a touchdown reception and breakaway by C.J. O’Grady to turn a 34-34 tie in the fourth quarter into a 55-34 win Saturday afternoon.

2Q-:04: Arkansas misfires on an offensive possession with Nick Starkel over-throwing a wide open Treylon Burks going down the left sideline, then come back and drive 52 yards in 20 plays and get a 46-yard field goal to make it a one-score game at halftime. Hogs 27, Colorado State 24

2Q-11:41: Hogs get a drive going after Montaric Brown recovers a fumble, but a couple of misfires on passes into the end zone result in Connor Limpert coming on for a 22-yard field goal with 11:41 left in the second quarter. Hogs 27, Colorado State 14

The first quarter comes to an end … finally … with Arkansas leading Colorado State, 24-14, scoring more points than they have an in any game this year … the first period.

Razorbacks have 249 yards of offense in the first quarter, including 137 on the ground and starting quarterback Nick Starkel is 7-of-12 for 112 yards and two touchdowns. Rakeem Boyd has 81 yards rushing, Devwah Whaley has run for 60.

1Q-1:02: Arkansas’ offense gets bogged down after a no-call on a pass to De’Vion Warren in the Endzone, then Myron Cunningham gives up a sack. Connor Limpert knocks a 54-yard field goal through. Hogs 24, Colorado State 14

1Q-3:27: Colorado State isn’t dead yet. The Rams go 75 yards in five plays, ripping off a couple of big runs on the edge of the Hogs’ defense for a 14-yard scoring pass from Collin Hill to Warren Jackson. Hogs 21, Colorado State 14

1Q-5:54: Rakeem Boyd blows through a gaping hole in the middle and out-runs everybody for a 69-yard scoring jaunt, giving Arkansas the most points scored in a game … in the first quarter. Hogs have 216 yards offense, 113 on the ground. Hogs 21, Colorado State 7

1Q-14:42: On the second play of the game after the kickoff, Colorado State’s Marvin Kinsey runs through the middle of the Arkansas line for a 75-yard score and, just like that, the Hogs find themselves down. Colorado State 7, Hogs 0

A year ago, Colorado State started Arkansas’ tumble to what was a disastrous year and now the rematch starts shortly at Razorback Stadium with Nick Starkel starting at quarterback.