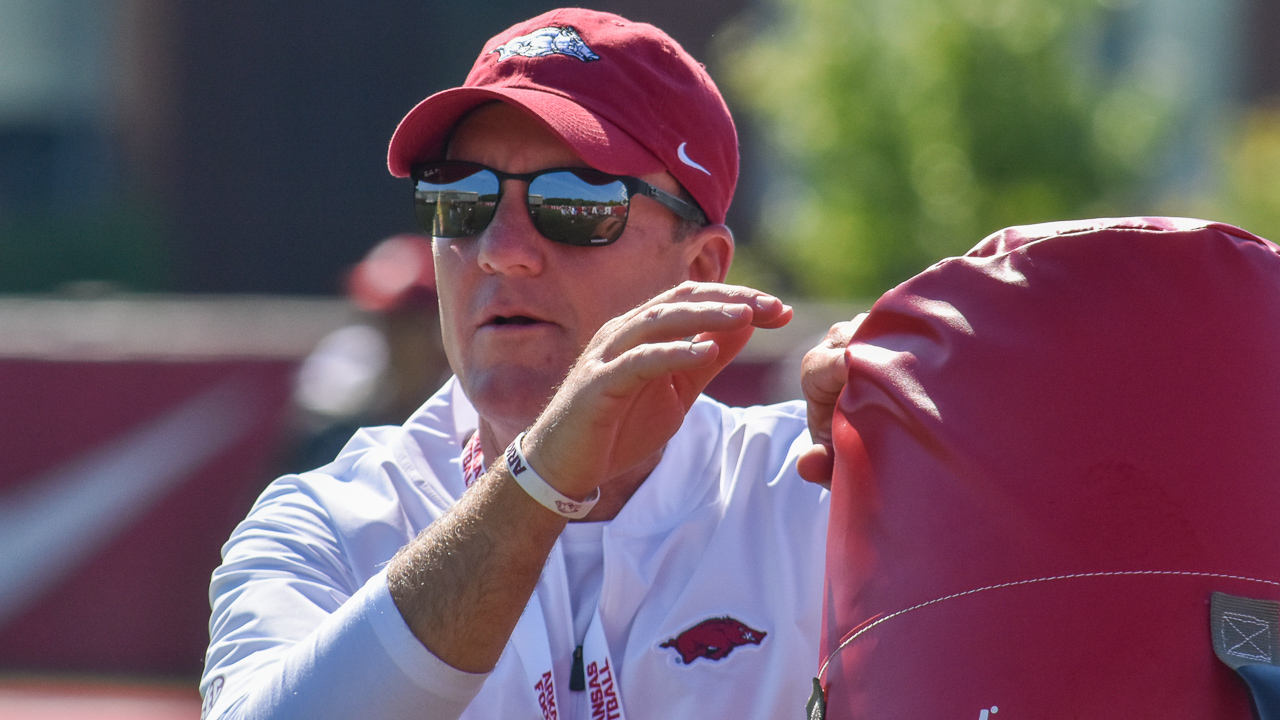 I’ve gone with the ‘over’ on the Hogs’ football win total the past three years. I’m not going to do that this year.

I was too optimistic in the Bret Bielema Era, and even last year I figured Chad Morris could win at least five games. I didn’t realize how bare the cupboard was.

Heck, I don’t think he did, either. To be blunt that was a very bad team with little athleticism.

They were so bad; I can’t really pick them to be a lot better this year — still too many question marks. The Hogs could be better at quarterback with senior graduate transfer Ben Hicks or junior transfer Nick Starkel. Maybe even with redshirt-freshman John Steven Jones.

But we don’t know for sure.

It’s the same thing with the receiving corps. Freshmen Trey Knox and Treylon Burks look the part, but how will they match up with experienced SEC defensive backs? Will the returning receiver show up and will talented tight end Cheyenne O’Grady grow up?

And then there is the offensive line. Pathetic is the best way to describe the play from last year. It would have to be markedly improved to get this team to six wins this year.

It’s not impossible, but anything but a sure thing. If they can produce, the running back tandem of junior Rakeem Boyd and senior Devwah Whaley could be extremely effective.

Running back is the strongest position on the team, and if Whaley and Boyd can avoid injury, they could really help this offense.

So, if the line blocks, a quarterback steps up and the receivers mature quickly, this team could score some points. Those are some big ‘ifs,’ though.

Defensively, Sosa Agim leads a talented defensive front, and Scoota Harris is legit at linebacker, but there isn’t enough depth at linebacker or defensive back. Maybe moving D’Vone McClure from the secondary to linebacker is a good move.

He did show flashes last season, but playing linebacker is completely different.

The defense will have to be much better to keep Arkansas in games, but if the offense can increase its production that will help.

Morris says the team is much further along than last year at this time, which stands to reason. The players and staff are on the same page and after a stellar recruiting class, with one on the way; there is a lot more athleticism on display.

However, I’m not confident enough to pick the Hogs to win any SEC games. I’ve got Arkansas finishing 4-8. I am confident they will double the win total from last fall by going undefeated against soft non-conference opponents.

The Hogs will be more competitive in the SEC and will have some close games and play with some teams you don’t expect.

The three games they have the best shot at winning are at Ole Miss and at home against Mississippi State and the regular-season finale against Missouri at War Memorial Stadium in Little Rock.

I am not among the group who thinks Arkansas has a chance at Kentucky. I am not sure why so many fans and pundits are picking that as a winnable game, but I don’t see it.

Ole Miss is very similar to Arkansas and could be very vulnerable Week 2 if they lose in the opener against Memphis. Many have pointed to that game as the biggest of the season and rightfully so.

A win at Oxford would mean if the Hogs win the games they are favored in the non-conference they’d only need an additional SEC win to go bowling.

Mississippi State must replace star quarterback Nick Fitzgerald among others. If Arkansas isn’t favored in the home game, they won’t be heavy underdogs.

Mizzou is the real wildcard.

The Tigers are highly rated in most preseason polls, but with a postseason ban, it could sink quickly if things go south early. If not, they may treat the Arkansas game as a bowl game and be highly motivated to win.

The more likely scenario, however, is the Tigers underachieve and limp into the Little Rock with little to play for. That would increase the odds of a Hogs’ win.

If Arkansas is sitting at five wins, that game would be especially big for them.

I am just hoping for an electric atmosphere in the final regular appearance at War Memorial Stadium for the Hogs before they start a rotation of playing in Little Rock every other year.

Arkansas could win six games or more and there are winnable games on the SEC schedule, but until they do it, I am not buying in this year.

I’ve fallen into that trap before.

There is too much improvement to be made and questions to be answered to predict bowl eligibility in August.