Bailey McCorkle set a career best of 14-2¾ (4.34) to finish as the top collegian in a field of 17 vaulters Saturday at the New Mexico Collegiate Classic in the pole vault.

That wasn’t the only big news for the Razorback women’s track team.

In New York City, Arkansas alum Sandi Morris attempted a world record in the pole vault after claiming the Millrose Games title with a meet record clearance of 16-1 ¼ (4.91).

After clearing 14-0 for the initial time last weekend in the Razorback Invitational, McCorkle surpassed that performance twice in placing second overall to professional vaulter Anicka Newell, who won with the same height as McCorkle.

Lauren Martinez, competing in her hometown where she was a four-time New Mexico state champion, tied for fourth at 13-11 (4.24) while Kaitlyn Banas set a career best of 13-7 (4.14) in placing ninth.

“What a weekend our vaulters had in New Mexico,” said women’s coach Lance Harter. “McCorkle, who is from Greenwood, continues to impress while Martinez is getting more consistent and jumping at her PR almost every weekend. Then Banas had another PR and seems to be setting them week after week.”

In New York, Morris had the bar raised to a world record height of 16-6 ½ (5.04) after she established the meet record and the world-leading mark for the 2020 indoor season, missing on three attempts.

Another Razorback alum in the competition, Lexi Jacobus, finished fourth at 14-1¼ (4.30).

“As far as the University of Arkansas, we were well represented across the board, from the sprints to distances to the vault,” said Harter. “It was fun to see our alumni so well represented. It’s just amazing how popular the Arkansas Razorback name is even in New York City.”

Using a redshirt this indoor season, Werner’s time would have bettered the Arkansas school record of 8:52.57 set by Dominique Scott in 2015 and moved her to equal No. 6 on the all-time collegiate list. Werner’s previous best of 8:56.97 was set a year ago this weekend in Seattle.

“Taylor competed really well,” said Harter. “She knocked off some of the top collegiate competitors that she’ll see outdoors. Taylor had a big PR that bettered our school record, and she already has plans to break it during the next indoor season.”

Nikki Hiltz clocked a personal best of 4:24.45 for fifth place in the Wanamaker mile as the top four finishers each set a national record.

Taylor Ewert, a future Razorback, claimed the women’s mile racewalk in 6:02.81 and then returned for the girl’s mile race, where she placed sixth with an indoor best of 4:50.07. 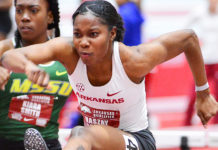 Razorbacks pick up three wins in Arkansas Qualifier on Friday 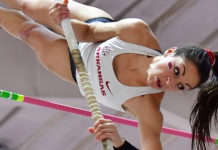 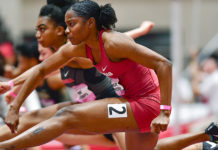 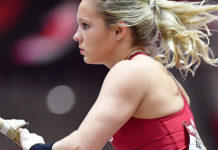 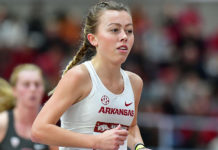 Gray rallies in 3,000-meters to pick up win with career best time 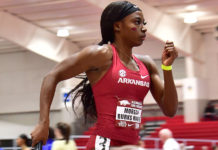