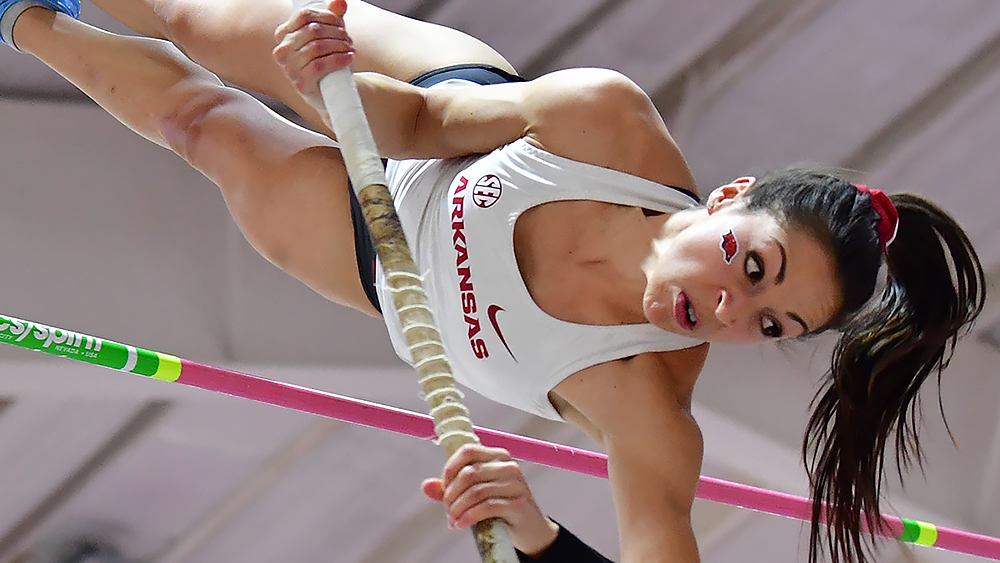 FAYETTEVILLE —In a competition which came down to a pair of teammates for second-ranked Arkansas, it was Lauren Martinez setting a pair of career best heights to claim victory in the invitational pole vault on Saturday at the Tyson Invitational held in the Randal Tyson Track Center.

Meanwhile in Seattle, Washington, at the Husky Classic, the Razorback distance crew registered a slew of career best times while racing at 3,000m and 5,000m on Friday as well as in the mile on Saturday.

“Obviously, the opportunity to divide the forces and let our sprint and jump crew do a great job at the Tyson Invitational and then our distance crew to run some all-time best time and national marks worked well,” said Arkansas women’s coach Lance Harter. “It further prepares us to be competitive at the SEC Championships, and ultimately at the national meet.

“We’ve had great improvement across the board, which was perfect for this weekend. Next weekend is an option weekend for us and then we are on to SECs.”

“I’ve been waiting to PR for a year now,” stated Martinez. “I was able to double PR when I cleared the 4.33 and 4.38. It was a great feeling and I was very excited. When it came down to just Bailee and I, it was nice having a teammate there as we both attempted a PR. I’ve been working on some technical stuff and I think today it finally clicked a little bit.”

Bailee McCorkle, who is currently No. 9 on the Arkansas all-time list, led the competition based on one fewer miss than Martinez through the 14-2½ height.

Then three misses for McCorkle at 14-4½ placed her second. The Razorback pair were the only ones to eclipse 14 feet as six vaulters missed at 14-2 ½ and finished with 13-8 ½ clearances.

Entering the weekend as the collegiate leader in the 5,000m, Katie Izzo produced her best time in the 3,000m with a stellar effort of 8:55.67 with teammate Carina Viljoen setting a personal best of 8:56.63 as they placed fourth and sixth in the race.

Izzo’s performance ranks second on the Arkansas all-time indoor list, trailing only the school record of 8:52.57 set by Dominique Scott in 2015. Viljoen’s effort ranks No. 4 on the Razorback all-time list.

“It was a phenomenal field to race against,” said Harter. “There were around 12 runners seriously looking at qualifying for nationals. Any time you can break nine minutes that’s kind of a special barrier, especially for a collegian. That was really impressive.”

After winning the 3,000m at the Razorback Invitational, Abby Gray improved her career best in the 5,000m with a clocking of 16:15.72 to finish fifth among collegians and 15th overall with the professional runners included.

“With everyone running so well, it’s a reconfirmation that we’re on our way in preparation for the SEC Championships as well as the national meet,” said Harter.

The fast times continued in the mile on Saturday. Izzo won her Invitational section in 4:35.05 and placed fifth overall as Viljoen (4:35.33) and Gear (4:36.59) raced together in another section to finish sixth and seventh overall.

Earlier in the meet the Arkansas sprint squad competed in the 200m.

Wilson generated a career best of 23.49 to win her Invitational 200m section and placed fourth overall. LSU’s Thelma Davis produced a world-leading 22.80 for the overall victory.

Effiong led the field in the other 200m competition with a 23.87 to edge out a 23.88 from North Carolina A&T’s Nilaja Florence in the same heat.