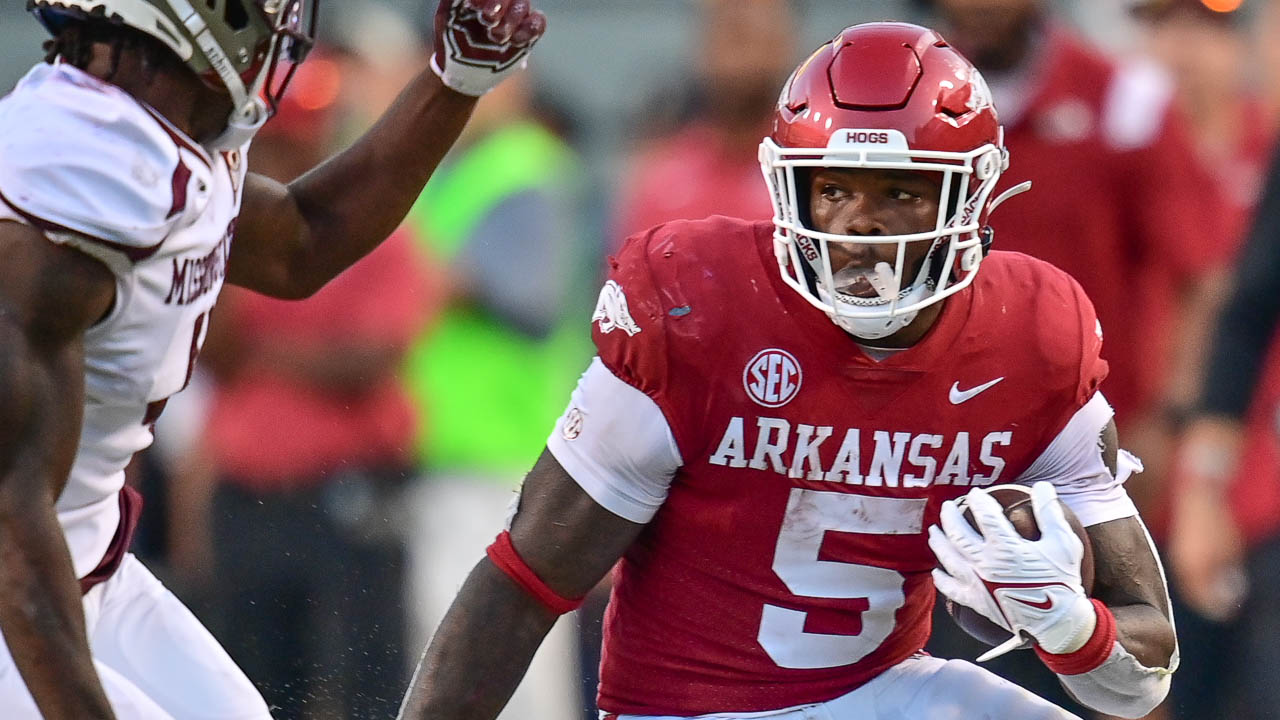 FAYETTEVILLE, Ark. — Bobby Petrino is back on the field at Razorback Stadium for the first time in over a decade.

The reaction wasn’t particularly noticeable in pregame warmups with both teams on the field as he and Arkansas coach Sam Pittman met on the 45-yard line and chatted for a few minutes.

It is 90 degrees just a half-hour before kickoff as the Razorbacks host Missouri State, starting just after 6 p.m.

The will be broadcast on ESPN+ and SECN+. You can here the game here and on ESPN Arkansas radio stations 99.5 in Fayetteville, 95.3 in the River Valley, 96.3 in Hot Springs and 104.3 in Harrison-Mountain Home.

Follow along as we will have the key points during the game.

1Q 2:47: Missouri State is out-playing Arkansas, who is making mistakes with costly holding penalties and a fumble that killed a drive. The Bears drove 64 yards in 12 plays with running back Jarcardia Wright getting the final yard around right end for an early lead. Missouri State 7, Hogs 0

After Raheim “Rocket” Sanders fumbled going into the end zone, Missouri State ends the opening period driving and facing a key third-and-5 on their own 25-yard line.

The Bears are out-playing the Hogs, who keep shooting themselves in the foot and quarterbck Jason Shelley is showing he’s the real deal and playing like a typical Petrino quarterback, running just enough and hitting key passes.

2Q 13:29: A 45-yard pass from quarterback Jason Shelley to wide receiver Naveon Mitchell set up the Bears who ended up settling for a 28-yard field goal by Jose Pizano. Missouri State 10, Hogs 0

2Q 10:36: The Razorbacks can’t get a handle on Shelley, who twisted Bumper Pool into knots in high school and did it again on a 24-yard touchdown scamper where he left the Hogs’ linebacker clutching air. Arkansas did get down to Rice in last year’s opening game by 17-0, which is the same position they are now. Missouri State 17, Hogs 0

2Q 8:25: After some straight talk from Pittman between possessions, the offense looked different. They drove 75 yards starting with a 20-yard pass from KJ Jefferson to Matt Landers, then Raheim Sanders ripped off 55 yards on 5 carries, getting the final three on the left side. The offensive line looked to be in a different gear that drive. Missouri State 17, Hogs 7

4Q 3:28: Missouri State didn’t take long to answer and on a fourth-and-inches Petrino pulled one out of the archives similar to the throw-and-catch against LSU in 2010 with the Hogs as Shelley found a wide open Ty Scott for a 47-yard touchdown. Missouri State 24, Hogs 17

The third quarter ends with the Bears driving into Razorback territory as their offense continues to eat up chunks of yardage.

4Q 12:04: Bears drive into Razorback territory before the defense stiffens and they have to settle for a 31-yard field goal from Pizano.

4Q 11:38: Jefferson under-hands a shovel pass to Sanders, who breaks through a hole in the middle and rips off a 73-yard scoring play that will go down as a passing play but is more of a running play. Never mind that because it got the Hogs close again. Missouri State 27, Hogs 24

4Q 9:16: After the defense shut down Shelley and the Missouri State offense, Bryce Stephens, who had been getting close to breaking a big return all night finally got one. He brought a booming 57-yard punt back 82 yards to finally give the Hogs a lead. Hogs 31, Missouri State 27