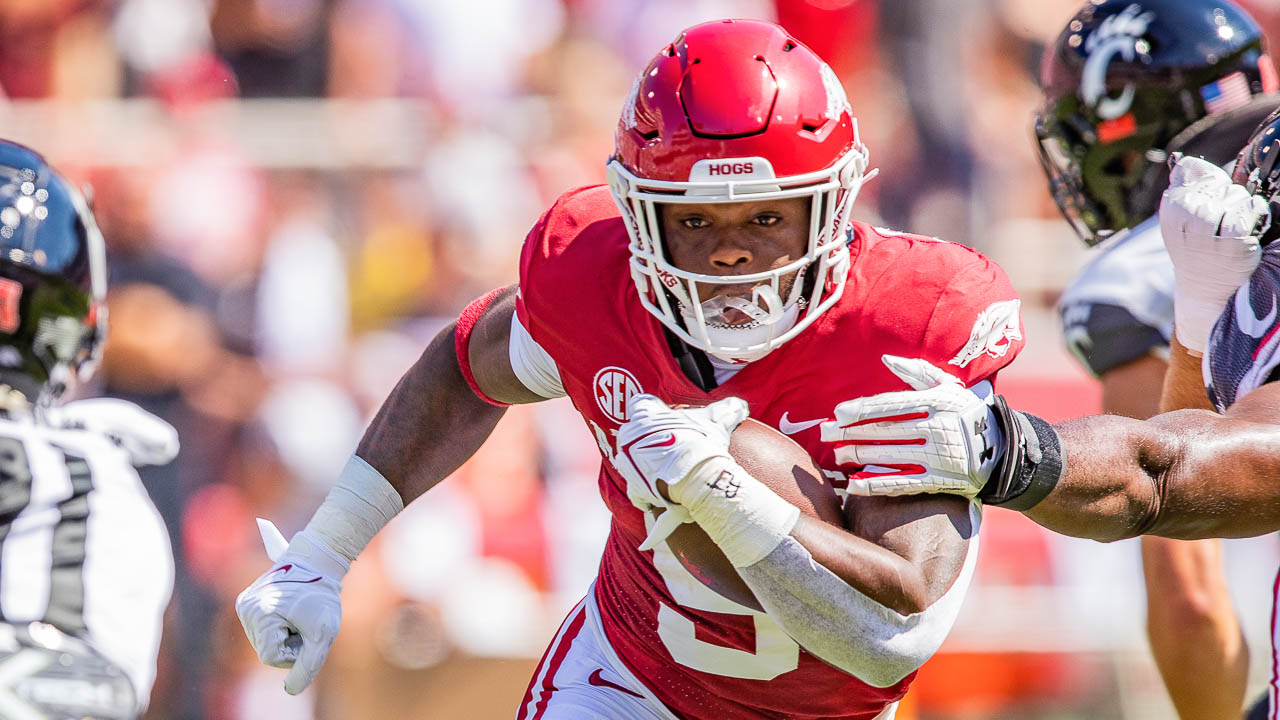 And the league team isn’t ranked.

South Carolina, 1-0, comes in after not looking particularly great against Georgia State while the Razorbacks downed No. 23 Cincinnati, 31-24, and fed the rising expectations of fans.

The game will kick off at 11 a.m. and you can watch on ESPN and fuboTV.

Listen to the game online at HitThatLine.com or on the radio at ESPN Arkansas 99.5 in Fayetteville, 95.3 in the River Valley, 96.3 in Hot Springs and 104.3 in Harrison-Mountain Home.

There will also be a live blog to follow along during the game with commentary plus analysis after the game here at HitThatLine.com.

• This year marks the first time since 1995 that Arkansas face South Carolina in the month of September. This weekend’s matchup with the Gamecocks is the earliest the Hogs have opened SEC play at home since the 2012 season, when Arkansas hosted top-ranked Alabama on Sept. 15.

• QB KJ Jefferson once again displayed why he is one of the most dynamic quarterbacks in college football in the Hogs’ season-opening win over Cincinnati. Jefferson completed 18-of-26 passes (69.2%) for 223 yards and three touchdowns while rushing for 62 yards and a score, his fourth career game with at least one passing touchdown and at least one score on the ground. It was also his sixth career game with three or more passing touchdowns.

• RB Raheim ‘Rocket’ Sanders, who burst onto the scene as a true freshman last year, opened the 2022 season with a bang. The Rockledge, Fla., native logged his second career 100-yard rushing effort in the win over Cincinnati, running for 117 yards on 20 carries (5.8 avg) to finish as the Hogs’ leading rusher. Sanders was one of four Razorback ball carriers to rush for at least 500 yards in 2021 – a feat that had not been accomplished at Arkansas since 1975.

• LB Bumper Pool turned in his 18th career double-digit tackle effort in the season opener, carding a team-high 13 tackles with one for loss. Pool, Arkansas’ leading tackler in 2021, has posted two consecutive seasons with 100+ total tackles and boasts the second-most tackles (333) among all FBS defenders since 2019. He has racked up 362 career tackles – good for eighth-most all-time at Arkansas.

Radio: Online at HitThatLine.com or on the radio at ESPN Arkansas 99.5 in Fayetteville, 95.3 in the River Valley, 96.3 in Hot Springs and 104.3 in Harrison-Mountain Home.