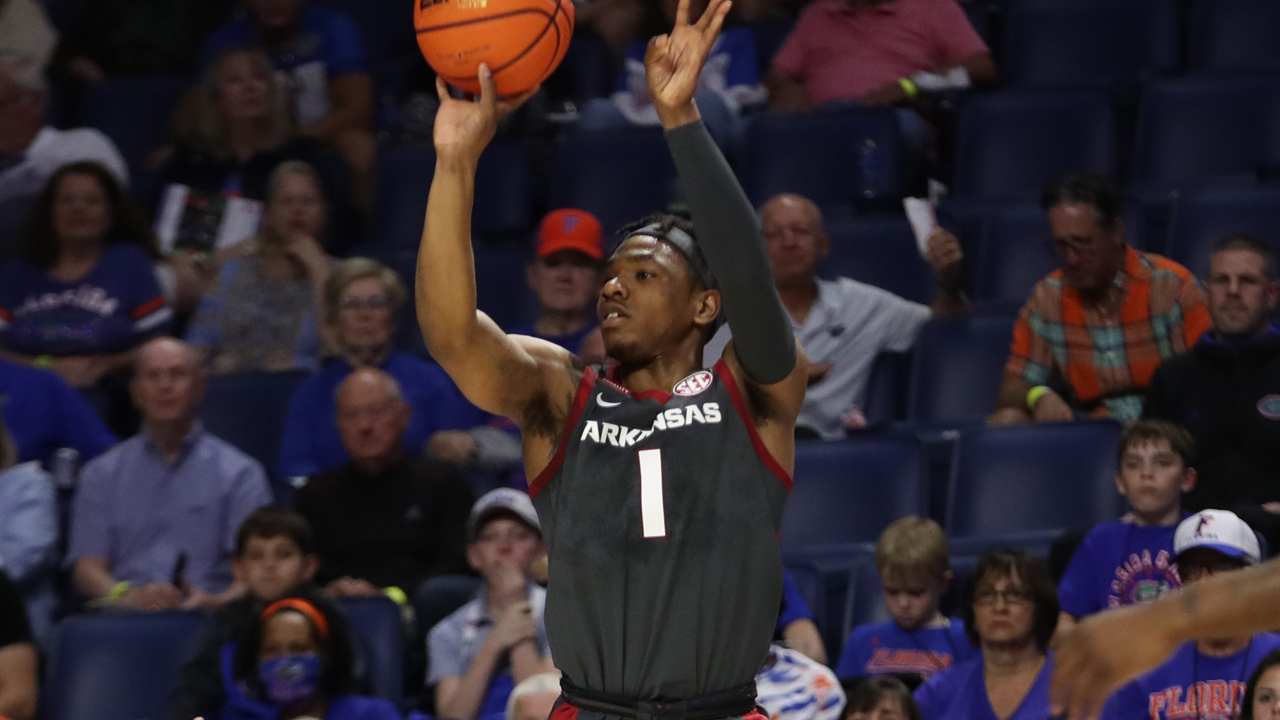 Even the doubters have to admit this Arkansas team is now rolling.

After an 82-74 win over Florida in Gainesville, Fla., Razorbacks coach Eric Musselman was finally able to talk about it with his team.

“We didn’t really talk about it before the game,” he said later. “The players weren’t here and it’s a different team.”

With three games left on the schedule and two of them at home, they probably need just one more win to lock up a first-day bye in the SEC Tournament.

The road doesn’t appear to bother this team a whole lot.

“Right now we’re a really confident team on the road,” Musselman said. “Everybody can see that.”

He didn’t talk about the Hogs not getting a win in Gainesville since 1995. They weren’t going there to just show up.

“We got on the plane with the thought process of winning this game and not being satisfied with how we’ve played,” he said.

Arkansas doesn’t look like a team that’s wanting to “settle” for much of anything.

“When a team wins at this pace, you’ve got a group that’s not satisfied,” Musselman said. “A group that’s hungry and wants to continue to get better.”

Jaylin Williams, Stanley Umude and JD Notae each drained key 3-pointers inside the final 5:30 for the win at Florida.

Also playing a key part in the win was Davonte Davis, who had 19 points, six rebounds and four assists. He looked like the Devo of last season for once this year.

Florida took the lead four minutes into the half until a three-pointer by Williams with 5:26 left, giving the Hogs their first lead (since 63-62 early in the period).

Florida answered but Umude answered with a three-pointer from the top of the key with 4:46 left to give Arkansas a 66-64 lead.

The Hogs never looked back.

Florida hung tough before Notae deflated the Gators with a three-pointer from the left wing with 1:06 left to put the Hogs up 75-71.

Au’Diese Toney (12 points) and Umude (11) points rounded out the group of five Razorbacks in double figures.

Florida was led by Colin Castleton’s 29 points and Tyree Appleby had 19.
.
Arkansas will host No. 6 Kentucky on Saturday. Tip-off is set for 1 p.m. and televised on CBS.

• Arkansas made three straight field goals held the Gators to just two points over five minutes and cut its deficit to one (14-13) at the second media timeout. Ultimately, Arkansas went on a 12-2 run to lead 18-14 before Castleton converted an old-fashioned three-point play.

• Florida continued to do damage from deep as six of its first eight field goals were three-pointers. The Razorbacks weathered the storm and the game was tied, 23-23, at the third media timeout.

• The Gators continued to make three’s (seven of their first 11 field goals) but the Hogs kept answering and led 37-30 at the fourth media timeout. Coming out of the media timeout, Notae converted a three-point play for a 37-30 lead.