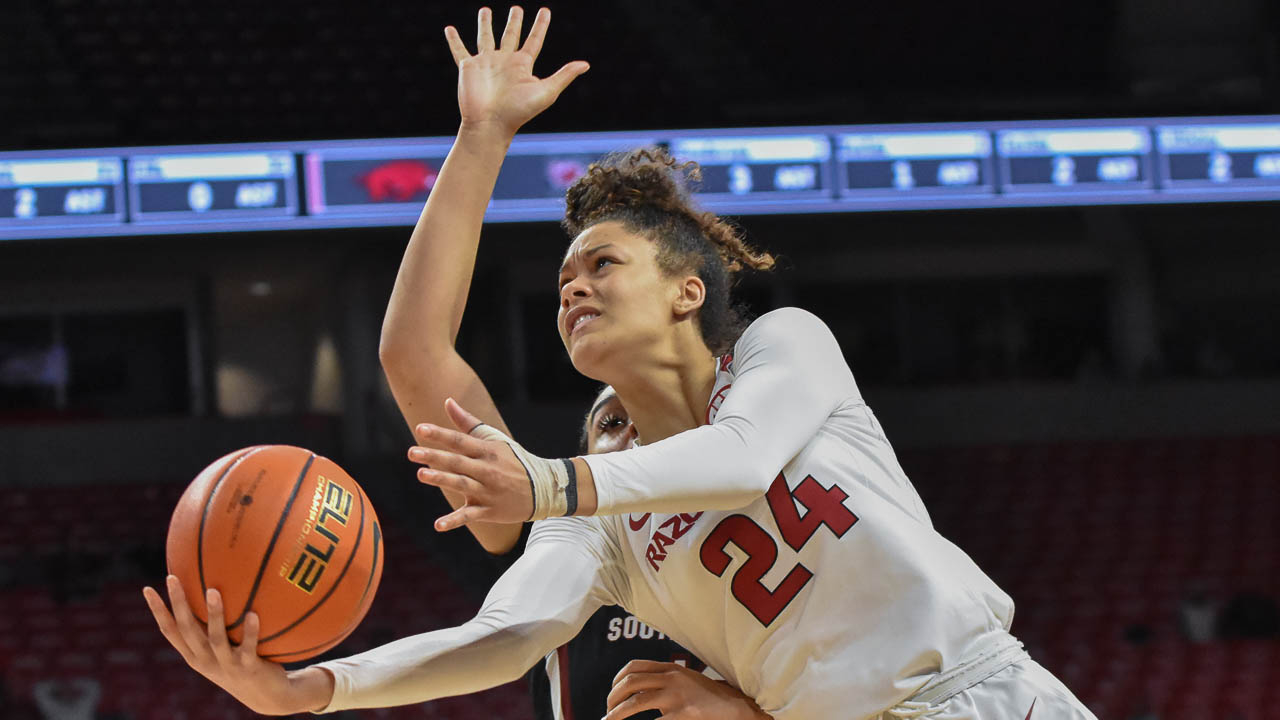 Arkansas trimmed a 20-point advantage to four with 4:20 to play, but ultimately fell to No. 1 South Carolina, 61-52, at Bud Walton Arena on Sunday afternoon.

The Hogs were led by Makayla Daniels and Amber Ramirez, who scored 17 and 14 points, respectively.

Sunday’s contest was a defensive battle, with neither team topping 18 points in any of the four quarters played.

The two teams traded 15-0 runs in the second half, but it was the experience of the country’s top team that helped South Carolina pull away in the final minutes.

The Gamecocks received big performances from Destanni Henderson and Aliyah Boston, who each went for 19 points. Boston added 13 rebounds in her double-double game.

Arkansas traded punches with South Carolina in the opening quarter.

South Carolina started to find Boston in the second quarter, as the dominant forward tallied 11 points and six rebounds in the frame. Arkansas trailed by nine heading into halftime.

The Gamecocks started to show their dominance in the third quarter, stretching their lead out to 20 and appeared to be on cruise control to a fifth-straight win.

But the Hogs stuck to the fight, climbing back into the game with a 15-0 run that started in the fourth quarter and ended with just under seven minutes in the fourth.

Arkansas applied a lot of defensive pressure on Boston in the game’s waning minutes, holding her to just four points in the second half. While Arkansas, on the shoulders of Daniels, brought it back to a four-point game, the Razorbacks ran low on steam and fell by nine.

• Arkansas held South Carolina to its second-lowest scoring effort of the season, with Duke being the only team to hold the Gamecocks to fewer than 61 points (55).

• South Carolina committed 19 turnovers as a result of the Razorbacks swarming defense.

• Jersey Wolfenbarger made a difference on the defensive side, helping lock down Boston in the second half and finishing with a team high +13.

Arkansas’ next chance to get back in the win column comes on Thursday in Tuscaloosa when the Razorbacks face Alabama. That game is set to tip-off at 8 p.m. and will be broadcast on the SEC Network.