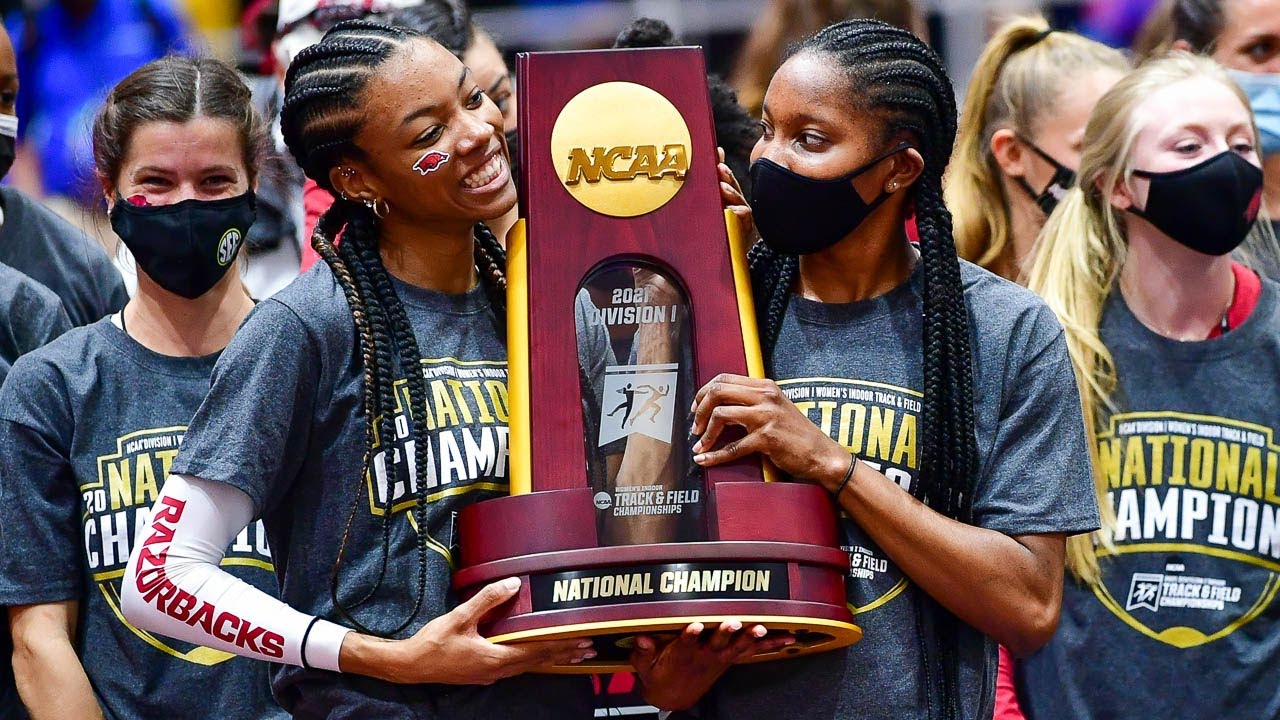 A surge of 58 points scored by the Razorbacks on the third and final day of the NCAA Indoor Championships secured another national championship.

The Razorbacks totaled 68 points to chase down the 16-point lead Texas A&M built over the first two days.

Arkansas’ total is the third highest winning score over the history of the NCAA Indoor Championships, dating back to 1983, trailing only 84 by Oregon in 2017 and 71 by Texas in 1988.

The Razorbacks also became the first women’s team to capture an indoor national title without an individual or relay victory.

“We started the day with 10 points and knew we had some scoring ability because of all the events that we covered for today,” Arkansas coach Lance Harter said later. “I met with the milers, being the first event, and reminded them a lot of times momentum starts with the first event and has a positive flow for the rest of the meet.

“They took it to heart, had a big scoring punch, and then it went to the next events, including a school record for Shafiqua in the 800m. Then all of sudden we’re only two points down and we knew we had the 3,000 and mile relay remaining.”

Scoring on the final day started with 14 points in the mile with a 2-3 combo for Krissy Gear and Kennedy Thomson behind the winning effort of Colorado’s Sage Hurta (4:30.58).

Arkansas cut Texas A&M’s lead in half at that point after the Aggie total reached 34 points with a runner-up finish in the triple jump.

With a pair of points from Jada Baylark in the 60 off a 7.23, five points followed for the Razorbacks in the 400 as Tiana Wilson and Rosey Effiong placed sixth and seventh. Wilson hit another career best as her 52.02 moves her to No. 5 on the UA all-time list while Effiong followed in 52.50.

When Daszay Freeman clocked a career best of 7.99 as runner-up in the 60m hurdles, moving to No. 3 on the UA all-time list, the Razorbacks closed the gap to 47-39.

A school record from Shafiqua Maloney earned a bronze medal in a tight 800m final. Maloney registered a 2:01.22 behind Aaliyah Miller of Baylor, who won in a meet record of 2:00.69, with Clemson’s Laurie Barton runner-up in 2:01.21, just a fraction ahead of Maloney.

Maloney bettered the Arkansas record of 2:01.96 set by Aneita Denton in 2005 and improved her own national record for St. Vincent and the Grenadines. She also moved to No. 8 on the all-time collegiate indoor list.

Just as vital, her six points pulled the Razorbacks within two points of the Aggies, 47-45, with three events left.

Neither team had anyone in the final of the 200m, but Arkansas had four entrants in the 3,000m.

Three Razorbacks scored in the race, combing for 17 points to secure the national champion prior to the final event, the 4×400 relay.

“We met with the 3k girls and said let’s take the pressure off the mile relay and make a statement here,” said Harter. “If we can get ahead by 3 or 4 points, then we can put this meet away. They obviously over-achieved and the meet was over.”

Katie Izzo and Abby Gray followed in fourth and fifth place, posting times of 9:03.85 and 9:05.52. The mark by Gray is a career best and ranks eighth on the UA all-time list. Logan Morris just missed adding a point in ninth place with a time of 9:10.40.

Following that strong showing the Razorbacks launched into the lead, 62-47, to defend the 2019 NCAA Indoor championship they won, but were unable to defend in 2020 with the national meet was canceled due to the pandemic.