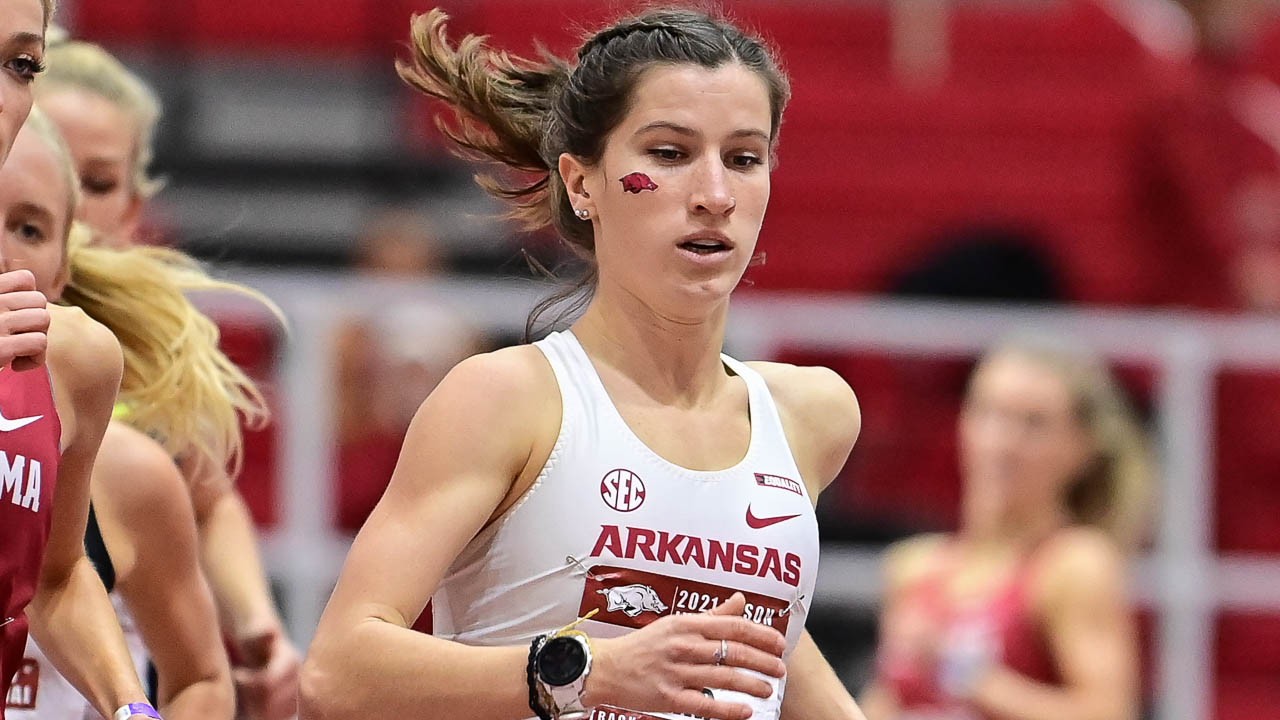 The second day of the Tyson Invitational provided more superlatives from the No. 1 Razorbacks as they claimed a fifth consecutive team victory this indoor season while the highlight performance was a school record in the mile by Krissy Gear.

“We’re super elated,” said Razorback women’s head coach Lance Harter. “We ran our DMR to get it qualified last night, so Krissy Gear came back in the mile today and rewrote the record book with a 4:31. She just did a fantastic job.

“We had a bunch of Razorbacks run lifetime bests behind her, so our depth really showed through between the 3,000 and DMR yesterday and coming back in the mile today. Everybody is walking away healthy, so we’re looking forward to even greater things in two weeks.”

Clocking a time of 4:31.83 to finish comfortably ahead of Alabama’s Amaris Tyynismaa (4:33.22), Gear surpassed the previous Arkansas school record of 4:32.48 set in 2015 by Dominique Scott on Kentucky’s oversized track. Gear’s previous best in the mile this season was a 4:38.22 from the Arkansas Invitational back in January while her career best was a 4:36.59 from 2020 in a race on the oversized track at Washington.

“It was a big confidence booster, I didn’t think I had it in me,” said Gear, who split 4:34.25 on the 1,600m leg of the distance medley relay Friday evening. “I went into it with a mindset of don’t think, just race. Obviously, our team is so deep, so it helped having teammates to push me up as well as others in the race. The field was so strong.”

“When I looked at the scoreboard, I thought oh, I set a PR,” Gear noted. “There were so many PR’s listed for Arkansas as well as other teams. It was so exciting and I’m so happy. I asked if I was finally able to make the top 10 list, since I wasn’t able to do that last year. Then they told me my time was above Nikki Hiltz and Dom Scott.

“I really don’t have any words for that. To know that I’m on par where they were in college, I guess gives me hope for the future.”

Izzo moved to No. 7 on the Arkansas all-time list while Gregory has a better time of 4:32.92 which now ranks No. 4. Hyde added another career best to her impressive collection this indoor season.

Another event area that provided a bulk of points was the pole vault where Bailee McCorkle won for the second consecutive week in leading an Arkansas 1-2-3-4-6 finish. This time McCorkle cleared 14-2 (4.32) while a pair of teammates joined her over 14 feet.

“In the pole vault we put together three vaulters over 14 feet with Bailee McCorkle gaining the win,” said Harter. “Then our 200m runners showed great depth. The momentum is in our favor.”