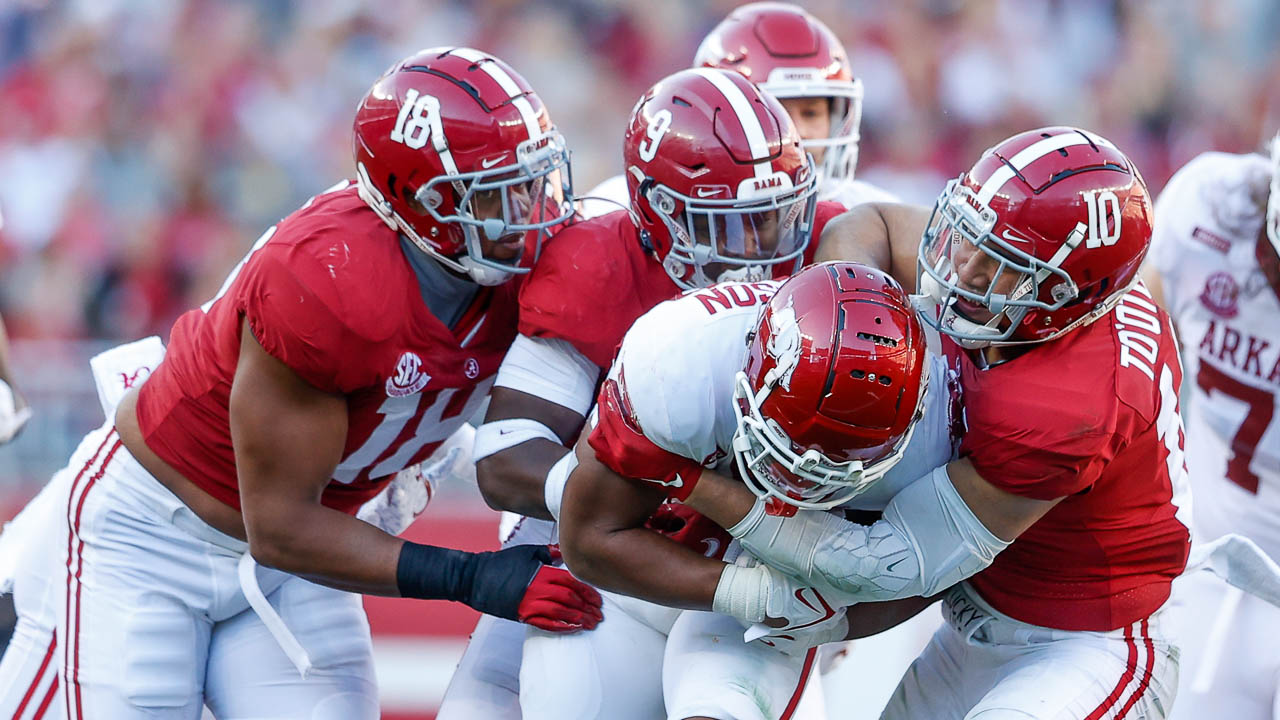 In the end, No. 2 Alabama made more big plays than No. 21 Arkansas to come away with a hard-fought 42-35 win in Tuscaloosa.

That was the last time the Razorbacks beat Alabama. For younger folks, the iPhone didn’t come around until a year or so later.

The Crimson Tide come in as a 20.5-point favorite at SISportsBook.

HitThatLine will have live updates throughout the game here in order.

No. 21 Arkansas Razorbacks vs. No. 2 Alabama Crimson Tide

Where: Bryant-Denny Stadium, Tuscaloosa, Ala.

Radio: HitThatLine.com, ESPN Arkansas 99.5 in Fayetteville, 95.3 in the River Valley, 96.3 in Hot Springs and central Arkansas, 104.3 in Harrison-Mountain Home.

1Q 8:34: Hayden Henry blows up a block and Alabama’s Brian Robinson slips, but wasn’t going to pick up a fourth-and-1 in Arkansas territory after an 11-play, 45-yard drive that stalled out on the Arkansas 30. Hogs 0, Alabama 0

1Q 7:41: Big stop by Hogs’ defense to avoid going down big as KJ Jefferson drops what appeared to be an early snap from center but they can’t get a first down and have to settle for a 48-yard field goal from Will Reichard. Alabama 3, Hogs 0

2Q 14:54: Alabama starts at it’s own 2-yard line and drives 98 yards in just nine players with Bryce Young throwing to John Metchie for a 20-yard scoring pass. The Tide’s offense got things straightened out in that drive and the Hogs’ defense couldn’t do a whole lot to stop them. Alabama 10, Hogs 0

2Q 6:06: Maybe the key is get backed up to your own goal and take off on a drive. Arkansas was backed up to its own 4-yard line, then ripped off a 96-yard drive in 14 plays with KJ Jefferson passing to Treylon Burks, who broke a tackle and scored from 15 yards out. Alabama 10, Hogs 7

2Q 5:21: It didn’t take Alabama long to answer. After the Hogs’ scoring play, Bryce Young throws 79 yards down the middle of the field to Jameson Williams (who broke past double coverage) and Alabama pulls away again. Alabama 17, Hogs 7

2Q 3:12: Arkansas comes right back as a couple of big runs by Trelon Smith set up the passing game and Jefferson threw a 40-yard scoring play to Warren Thompson where a touchdown was called, but replay put the ball inside the 1. Dominique Johnson carried the next play and got into the end zone, but replay had to overturn the obvious fact he was in. Alabama 17, Hogs 14

2Q 1:44: This one has quickly turned into a scoring festival and nobody can stop anybody. Alabama whips 75 yards down the field in six plays with Young finding Williams crossing the field and he out-runs the Hogs’ secondary for another score. Alabama 24, Hogs 14

Alabama’s offense is almost unstoppable when they are hooked up and everything is working. Arkansas’ offense is more workmanlike and can get bogged down quicker.

You wonder how much depth is going to come into play in the second half.

3Q 11:31: Alabama took the second-half kickoff and drove down the field with Young scrambling, then throwing a sidearm pass to Christian Leary just short of the line of scrimmage for an 11-yard touchdown pass. Alabama 31, Hogs 14

3Q 10:09: On a key third-and-1, Jefferson throws a back-shoulder pass to Burks, who catches it, then out-runs the entire Alabama secondary to complete a 75-yard scoring play to answer Tide’s touchdown. Alabama 31, Hogs 21

3Q 1:09: After missing a 48-yard field on the previous possession, Reichard makes good one a 30-yarder to open the lead as the Crimson Tide’s defense is starting to come up with solutions to Hogs’ offense. Alabama 34, Hogs 21

4Q 11:21: As Reid Bauer went up for a jump pass on a fake field goal, a lot of Razorback fans probably had flashbacks to miserable failures of such attempts but this time it worked. He finds Blake Kern, who made another one-handed catch and ran into the end zone for a 32-yard score. They can work. Alabama 34, Hogs 28

4Q 5:39: On a third-and-10, Young finds Williams wide open down the middle for a 40-yard scoring strike that put Alabama at 673 yards of offense for the game. Young has passed for 561 yards and the Hogs have a problem. The Tide gets a 2-point conversion as Young runs up the middle. Alabama 42, Hogs 28