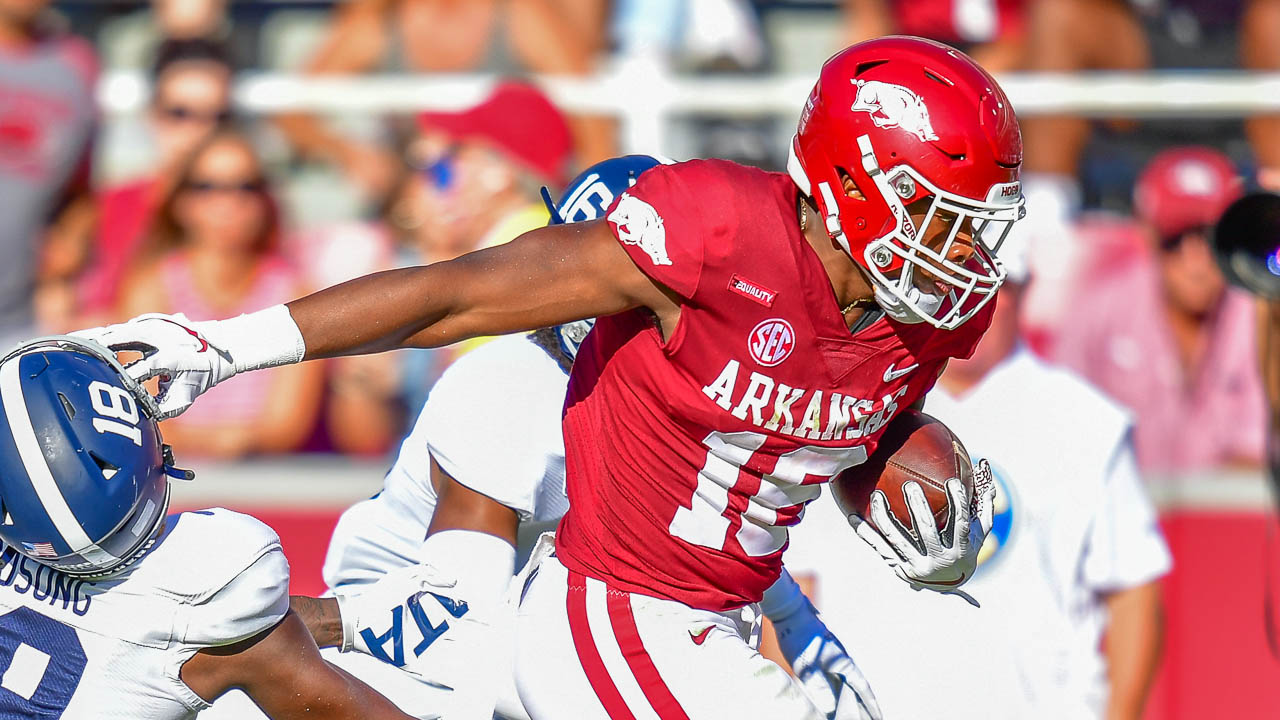 4Q 8:22: Malik Hornsby shows his speed on a simple 6-yard scoring run around the right side where he broke containment and turned on the jets to run between defenders and this game is officially over … but the score may not be final yet. Hogs 45, GSU 10

3Q 11:18: Hogs breaking game open as Treylon Burks takes a pass from KJ Jefferson for 91 yards down the left sideline, which is the second longest pass receptions in school history. It’s getting close to finish up time. Hogs 38, GSU 10

3Q 13:26: Arkansas opens the second half getting on the board in the first 1:27 with a four-play, 80-yard drive. The touchdown came on a 60-yard scoring pass from KJ Jefferson Warren Thompson, who created space behind the Georgia Southern defender without drawing a flat. Hogs 31, GSU 10

2Q 2:23: The Hogs’ offense starts clicking including a 44-yard pass to De’Vion Warren and a 12-yarder to Treylon Burks. They squandered a touchdown pass to Ketron Jackson when Beaux Limmer was flagged for being too far downfield, then settled for a 25-yard field goal by Cam Little. Hogs 24, GSU 7

2Q 7:22: The Eagles finally get some offense when quarterback Justin Tomlin found a crease in the Hogs’ defense on an option and raced untouched 76 yards for a score. Hogs 21, GSU 7

2Q 8:42: Georgia Southern backed the Hogs to their own 1-yard line with a punt, but it wasn’t a problem. KJ Jefferson directed a 99-yard scoring drive that took 1:56 and just seven plays with a 14-yard pass to Tyson Morris. Hogs 21, GSU 0

1Q 3:31: Arkansas takes advantage of a Georgia Southern mistake on a punt to retain position, then take 6:30 off the clock and drive 94 yards in 15 plays with Dominique Johnson getting the final 11. Hogs 14, GSU 0

1Q 12:07: After holding Georgia Southern to 1 yard after the opening kickoff, quarterback KJ Jefferson found Tyson Morris running wide open on a deep slant and hit him for a 47-yard game. Three straight running plays by Trelon Smith (the final 13 for the score) put the ball into the end zone. Hogs 7, GSU 0

Avoiding a letdown is the main goal for Arkansas today against Georgia Southern as a slow-arriving crowd begins to filter into Razorback Stadium that doesn’t have the same electricity as last week’s game against Texas.

That’s not surprising and was expected.

Look for the Eagles to stack the box against the Hogs and make quarterback KJ Jefferson have to pass to take control of the game. They know they can’t stop him running.

But don’t be surprised to see him break some runs, which happens when the defensive front can’t get the pressure they want and the well-laid plan goes sideways when the ball is snapped.

Betting line: Arkansas is favored by 23 points. Money line an hour from kickoff is Hogs -2,400, the over-under is 52.5 and ESPN’s Power Index gives the Hogs a 98.5% chance of winning the game.

Weather: A bright, sunny day in Fayetteville with temperatures in the high 80’s and just a few lazy clouds floating around.