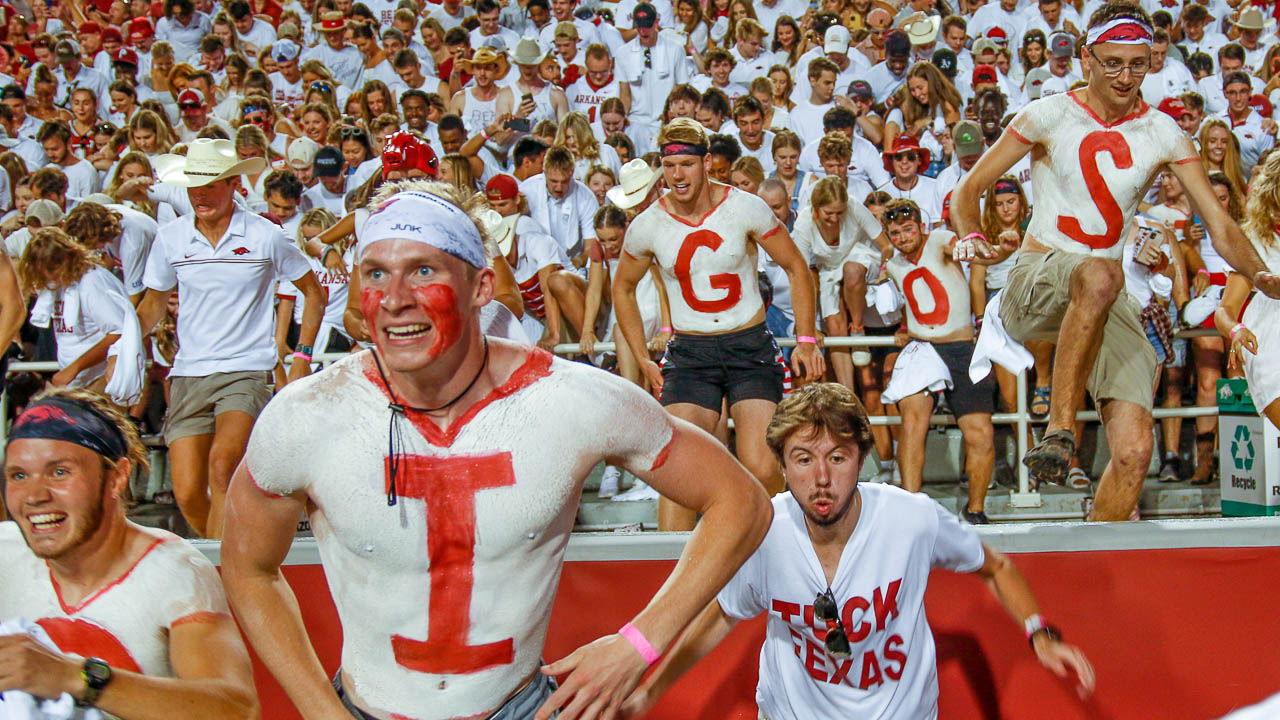 4Q 2:26: Texas gets a late score from Casey Thompson on a 2-yard run that does nothing but affect the final score. Hogs 40, Texas 21

3Q 1:50: It’s starting to look like 1981 again as Texas loses the ball on a goofy fumble and Rocket Sanders goes 26 yards on the first play and the Hogs are building a big lead. Hogs 33, Texas 7

3Q 2:08: The Hogs’ defense rose to the occasion and stopped Texas near midfield and KJ Jefferson engineered a 10-play, 38-yard drive that stalled inside the Texas 10 again. Cam Little kicked his fourth field goal of the game for another lead. Hogs 26, Texas 7

3Q 10:17: KJ Jefferson’s interception by BJ Foster set the Longhorns up in the Hogs’ end of the field and they drove 26 yards in six plays with Bijan Robinson getting the final yard into the middle. Hogs 16, Texas 7

Halftime: Hogs hold 16-0 lead as once they stopped the Texas offense after Cam Little’s field goal they were content to run the clock out.

3Q 3:00: Arkansas’ defense gets another quick stop and the offense goes 53 yards in seven plays before having to settle for a Cam Little 44-yard field goal. Hogs 16, Texas 0

2Q 7:34: Texas makes another costly mistake, this time in the kicking game when Cameron Dicker fumbled the snap from center and had his punt blocked. The Hogs could only go 8 yards, though, and Cameron Little kicked a 24-yard field goal. Hogs 13, Texas 0

End 1st: Hogs hold 3-0 lead but Texas is driving and have moved 51 yards in four plays before the end of the period and will have it on the Arkansas 24 to start the second quarter. Hogs 3, Texas 0

Midway 1st quarter: Razorbacks’ defense playing with emotion and selling out to stop run. Texas has just 5 yards of total offense while Hogs have 35, but just a single first down between the two teams.

First drives: Both defenses playing with a lot of emotion and Arkansas bottled Texas up before the Longhorns’ Cameron Dicker hit a 54-yard punt that Greg Brooks tried to field, fumbled and Texas’ Marques Caldwell recovered, but replayed showed he had stepped out of bounds. The Hogs avoid giving Texas the ball at their own 4-yard line.

Texas wins toss, defers to second half and Razorbacks going from south to north in Razorback Stadium.

Radio: ESPN Arkansas online at HitThatLine.com, or on the air at FM 99.5 in Fayetteville, 95.3 in the River Valley, 96.3 in Hot Springs and Pulaski County or 104.3 in Harrison-Mountain Home.

It’s going to be a rowdy evening at Razorback Stadium as the gates are open and the students are pouring into the seats.

There is not a cloud in the sky and nobody is really expecting one.

Keep it locked here for in-game coverage of the old-standing rivalry. It promises to be an electric environment as the Arkansas student section is over half full over an hour before kickoff.

Texas has a small band here is that is LOUD located in the southeast corner of the stadium. Fans are milling around and, based on what we saw from the people coming to the stadium nearly three hours before kickoff the Longhorns are not alone.