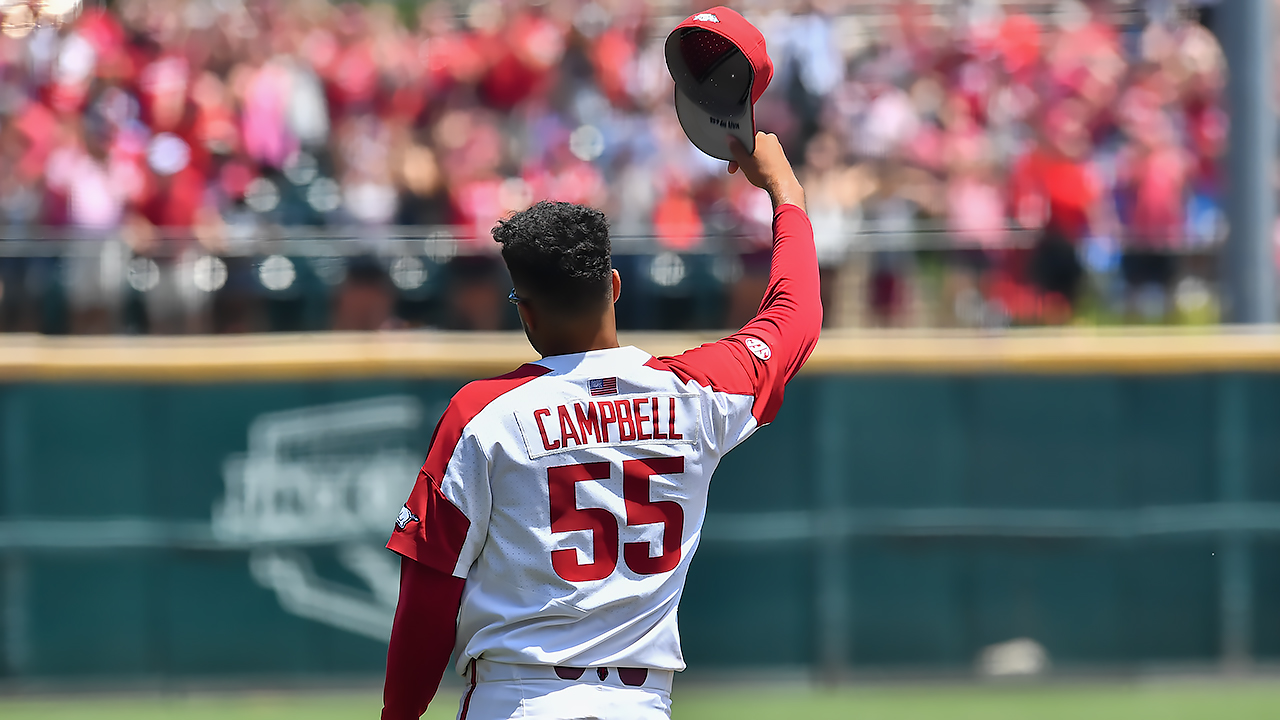 FAYETTEVILLE — Arkansas had an offensive explosion Saturday in the first game of the NCAA Super Regional, as they beat Ole Miss, 11-2, behind 11 hits, three home runs and four players with multi-hit performances.

With the victory, the Razorbacks take a 1-0 lead in the best-of-three series with game two scheduled for Sunday at 2 p.m. on ESPNU.

You can hear Phil Elson and Bubba Carpenter with the call on ESPN Arkansas 95.3 in the River Valley, 96.3 in Hot Springs and 104.3 in Harrison-Mountain Home.

A win on Sunday would give Arkansas its 10th trip to the College World Series in program history.

Arkansas (45-17) jumped on Ole Miss starter Will Etheridge for four runs in the first and two runs in the second, allowing Razorback starter Isaiah Campbell to work with a big lead.

The Hogs ended up chasing Etheridge in the fourth after he put two runners on by a hit by pitch and a single. Those two runners later scored on Matt Goodheart’s three-run blast to left-center, making Etheridge responsible for eight runs, six being earned.

Trevor Ezell finished with the top hitting line in the game, going 3-for-5 with one RBI, a home run. Casey Martin, Matt Goodheart and Dominic Fletcher all had two hits each.

Goodheart drove in three, two off of his home run, while Fletcher finished with one RBI.

The 11-2 victory is Arkansas’ second largest postseason victory in the last three years and the third-most runs ever scored in a super regional. It’s also the Razorbacks largest victory over Ole Miss since an 11-1 win in 2014.

Saturday’s game was played in front of 11,350 fans, the largest postseason paid attendance in Baum-Walker Stadium history and sixth-most all time. It’s the fourth-straight postseason game that the attendance has topped 10,000 or more.

Redshirt junior Isaiah Campbell couldn’t have given the fans at Baum-Walker Stadium a better final showing on his home field than he did today.

Campbell gave up just two runs, both solo home runs, over 8.1 innings, a career long, while striking out seven with one walk.

Ole Miss got to Campbell early with the first inning solo homer by Grae Kessinger, but the Olathe, Kansas, native settled in after that to twirl seven more scoreless frames before coming back for the ninth.

It was Campbell’s second-straight start of eight or more innings and one walk. He easily earned the victory for his 12th of the year, which is third-most ever in a single season by a Razorback.

For the 11th time this year, Arkansas showed off its power, hitting three or more home runs, as Jack Kenley, Trevor Ezell and Matt Goodheart all went deep in the game.

Kenley’s three-run home run in the first capped a four-run inning. It was his 13th home run of the year and first three-run home run. Goodheart homered in the fourth after Ole Miss went to the bullpen to replace Etheridge with Tyler Myers.

It was his fifth homer of the year and third in the last five games. Ezell hit his home run in the sixth, his 10th, to lead off the inning and build Arkansas’ lead to 10-1.

After going 1-for-23 in his last six games, shortstop Casey Martin broke out of that slump on Saturday, going 2-for-4 with two RBIs and two runs scored.

His single in the first inning followed Ezell’s lead-off double to put the pressure on Etheridge before the first out was recorded. He later scored on Jack Kenley’s homer.

He brought in Arkansas’ fifth run of the game on a sacrifice fly in the second and later drove in Christian Franklin with a single up the middle in the fourth.

It was Martin’s 24th multi-hit game of the season and first since May 18 against Texas A&M.

“Just a really good job by our team overall. We played really good defense and our offense was clicking pretty good. We did a nice job of fouling off a lot of pitches with a lot of good two-strike swings. We got pitch counts up on (Will) Ethridge. Obviously, Isaiah (Campbell) was really good today just locating and working ahead. I think he had one walk, seven Ks and pitched to contact when he needed to. That allowed him to get really deep in the game. He gave up a solo homer to the second hitter of the game and it didn’t faze him. He did a great job of getting out of that inning. He kept the same demeanor, went with the same approach and kept attacking.” — Coach Dave Van Horn on Arkansas’ 11-2 win over Ole Miss

“I kind of wanted to get him out with maybe two outs in the eighth and then we said, ‘Aw, let’s just let him finish,’ because I wanted him to get a little bit of an ovation. It was going to be his last outing here at home. Then he got a quick out and Coach (Matt) Hobbs and I had decided, ‘That’s it.’ I think he was right at a hundred pitches or so. He came running down around the corner and said, ‘I want to finish this up,’ and I said, ‘ok, you can go back out, but you’re going to get one out, and he said, ‘ok.’ So that’s kind of what went down there.” — Van Horn on Isaiah Campbell going back out for the ninth inning

“It feels like we haven’t really done anything. Just like last week, I told the players after the second win they still hadn’t done anything. It’s nice winning games, but I’ve been on both sides of it – coming back and winning them and not finishing them out. So same as always. Go home, take a shower, eat, hang out, watch some baseball and get up and do it again.” — Van Horn on his team taking a 1-0 lead in the super regional

“Nothing changed after that home run. In all honesty, I made a pretty good pitch inside that got in on his hands. He works out and is a strong kid and a really good batter. He got enough on it and got it out. But no, it didn’t faze me at all. I just took a deep breath, got back in the strike zone and just kept taking one pitch at a time.” — Isaiah Campbell on bouncing back after the home run

“He just shook my hand and said good job today. Just proud of me pretty much. Just walking off for the last time on the mound at Baum, it was special. A lot of emotions when I was walking off that mound, just seeing the fans giving me a standing ovation, it was awesome. I’m going to miss this place and everything, but we’ve still got unfinished business.” — Campbell on exiting the game in the ninth to a standing ovation