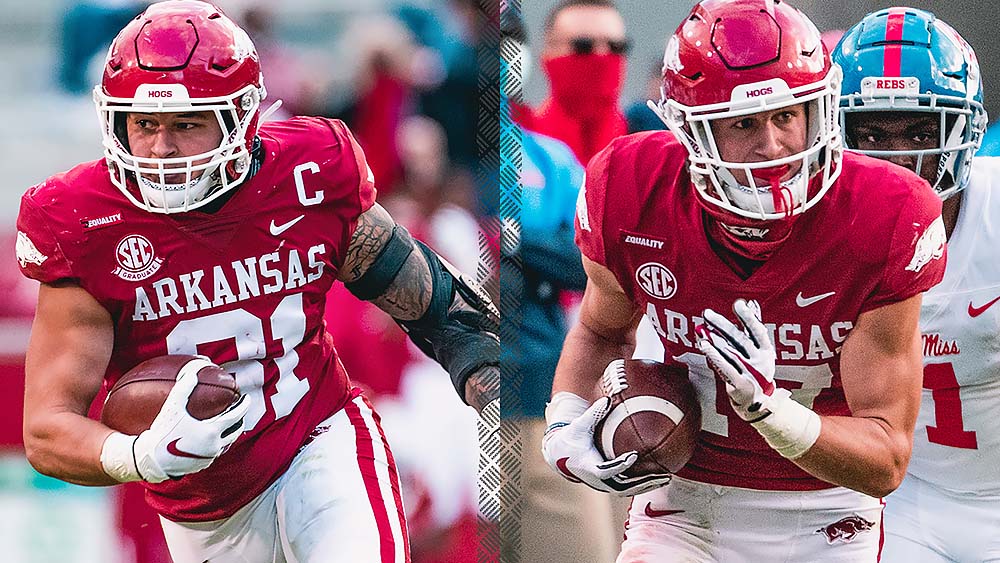 You can spin it however you want to make yourself happy, but Arkansas let go of the rope against Georgia last week.

Now the Razorbacks have to grab that rope again Saturday on the road against Ole Miss. Don’t call it a particularly hostile environment because Oxford is never that.

The biggest misconception among Hog fans is Odom’s defense shut down Ole Miss. Nope. They managed to put together a smoke-and-mirrors defense that Corral hadn’t seen before and he kept throwing to the guys on the other team because he wasn’t seeing the coverage correctly.

Take away the turnovers and last year’s game wasn’t even close.

Last year has nothing to do with Saturday’s game, but don’t start thinking because the Hogs won by double digits last year they simply dominated the Rebels. It was more Ole Miss’ mistakes  and a defense that Corral had never seen.

Don’t expect that defense to work like it did last year or Corral to throw a lot to the Hogs. He hasn’t thrown an interception this season.

But it IS Arkansas-Ole Miss and weird things happen when these two schools get together.

Seven overtimes, a missed field goal called good (for the kids, that actually happened in 1960 and older Hog fans still aren’t over it), 30-0 Arkansas over No. 8 Ole Miss in 2014, Archie Manning getting a first-half lead and hanging on in the Sugar Bowl after the 1969 season … you never really know for sure what’s going to happen.

The oddsmakers aren’t giving any defense much credit in this one and the guess is they are probably right this year.

A lot is riding on this game.

There is not a clear-cut favorite as the second-best team in the SEC West. Alabama is going to have to suffer a complete collapse to fall off the top of that pecking order, but the winner of this game could be in the driver’s seat for that runner-up spot and a Sugar Bowl bid.

The view from here is the biggest question in this game is going to be the Hogs’ offense. Can they score enough points to keep up with Ole Miss?

Based on history and a gut feeling, it’s probably going to be a shootout and the last team with the ball wins.

Auburn messed up a couple of game-separating choices last week and Pete Morgan pulled one out in the last game of the night.

Considering all the upsets last week and finding out more about everybody, about the only thing we know is Texas A&M isn’t any good, Mississippi State may not be and LSU-Aggies could be for the bottom of the division right after Thanksgiving.

Vanderbilt at Florida (-39): The Commodores are challenging for maybe the worst team in the history of the league. People just a couple of years ago were talking about Vandy suddenly being a rising power and now they are wretched. The Gators may want to make a statement after being upset last week. Florida 56, Vanderbilt 10

South Carolina at Tennessee (-10.5): Shane Beamer apparently didn’t inherit a whole lot from Will Muschamp, but he’s in charge of cleaning up the mess. The Vols have shown they can score points at times and the guess is they will do that this week. Tennessee 35, South Carolina 21

Georgia (-15) at Auburn: The Tigers played a surprisingly bad LSU team last week and couldn’t do anything offensively. They don’t have any running backs which isn’t helped by the fact they don’t have any offensive linemen. That’s a really bad combination. The Bulldogs have both. Georgia 35, Auburn 7

North Texas at Missouri (-19): Why? Just why? This game should not even be close by the end of the first quarter unless Eli Drinkwitz has told Chad Morris to hold his beer because he can top him. Missouri 63, North Texas 7

LSU at Kentucky (-2.5): I have no idea the last time the Wildcats were favored over the Tigers. That’s primarily due to the infrequency of that combined with a lack of interest. Ed Orgeron HAS to have a win or he may be the one at that fishing hole he mentioned on his radio show this week. LSU 27, Kentucky 24

Alabama (-18) at Texas A&M: Jimbo Fisher, the most over-rated coach in recent memory, against Nick Saban who may be the best in modern history and in the conversation for best ever (and I don’t think you can compare eras because too much is different). Saban won’t run it up on his former offensive coordinator, though. Alabama 38, Texas A&M14