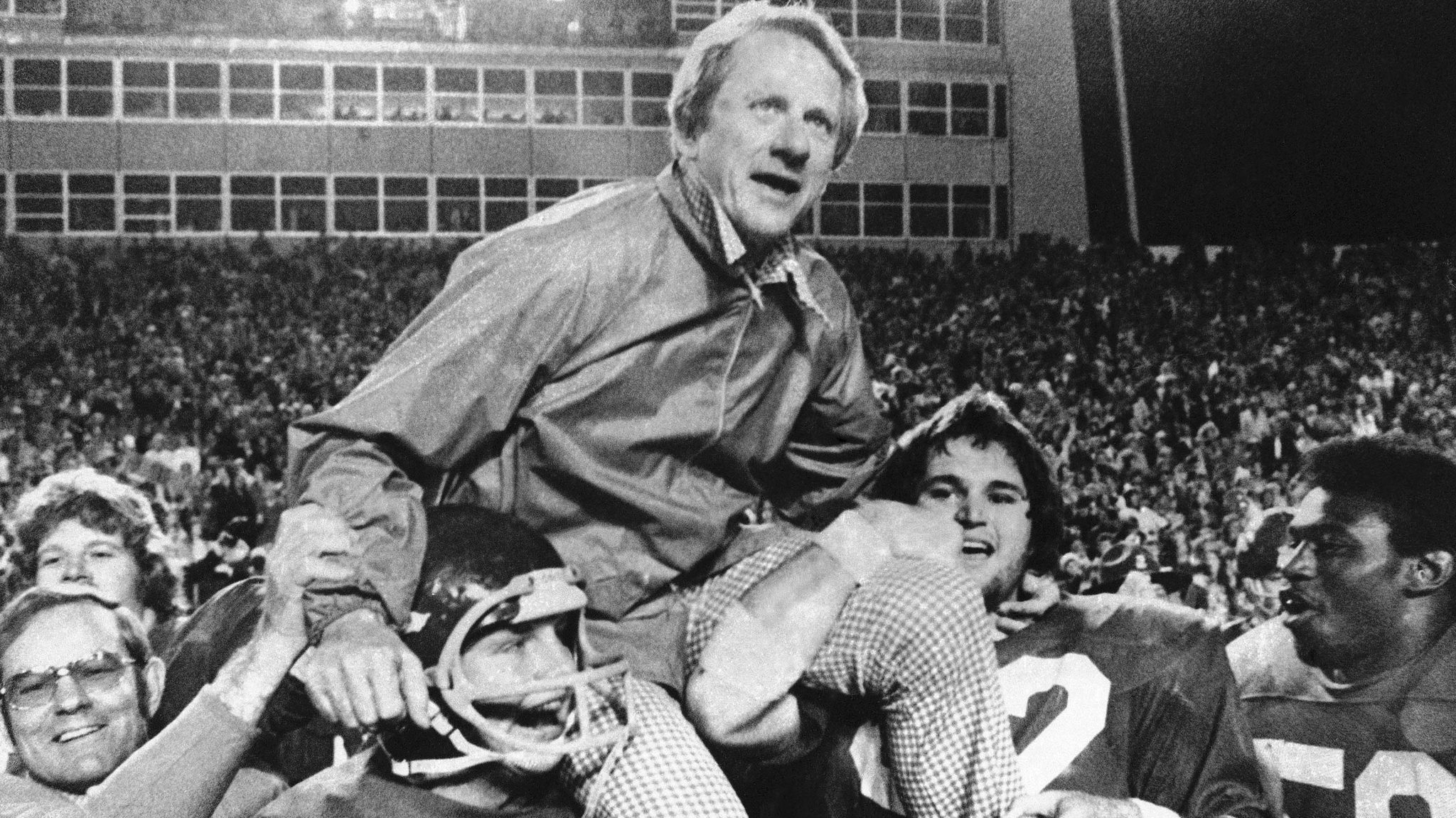 In the well-deserved praise on the passing of legendary Arkansas coach Frank Broyles, most are general.

If Broyles had an over-riding passion in sports — and that’s ALL sports, not just football — it was winning.

In 19 years as football coach, he won seven conference championships. For the younger folks, the Southwest Conference in the 1960’s and 1970’s was as good as any in the country.

Over those 20 years, the league was in the national championship picture almost every year, won four national championships and finished in the top five nationally nearly every year for nearly 30 years. That included at least four times a team COULD have won the title on New Year’s Day (including Arkansas when it beat Oklahoma in the Orange Bowl after the 1977 season).

Broyles was one of the first of the CEO-type coaches. No one coached the coaches better than he did. Because of that along with the fact he actively promoted his assistants for top head coaching positions he got the best.

Plus there was the fact he paid better than nearly anybody else.

“John Barnhill told me early on you can’t pay a bad coach too little or a good one too much,” Broyles said years later of the legendary athletic director who brought him to Arkansas. “I still believe that to be true.”

Don’t believe it? Try some of these names:

There were others, but that’s just the head coaches who led teams to national championships and/or Super Bowls.

A great athlete himself (he was drafted by the Chicago Bears of the NFL and the New York Yankees in baseball), Broyles was one of the best that ever lived at looking at a player and projecting what he would be best doing at the big-time college level.

In 1983, he was in Dallas just ahead of the NFL Draft for some reason. We accidentally ended up in the same place, talking NFL players. Somehow the name of highly-touted Notre Dame tight end Tony Hunter came up.

“He’ll never be a big-time player in the NFL,” Broyles said.

“Really?” he was asked. “Everybody thinks he’s a can’t miss.”

“He can’t catch the ball,” was Broyles’ reply.

Hunter was drafted No. 12 by the Buffalo Bills and caught 134 passes over four years before a leg injury mercifully ended his career. That’s an average of two catches a game, which is not what you expect from a player picked in his position.

Broyles retired after the 1976 season. Probably a year or two early. He had made the decision at midseason when it looked like the Hogs were going to win the SWC for the second straight year.

They finished 5-5-1, but Broyles stuck to his retirement. Mainly because he had secured Lou Holtz, who was coaching the New York Jets and had discovered the NFL didn’t exactly suit his skillset.

Broyles knew Lou would do well with maybe the best collection of players on a roster that Arkansas had ever had. NFL Hall of Famer Dan Hampton wasn’t even considered the best of that group, by the way.

He started doing color commentary for ABC on the biggest college football games (unless it was an Arkansas game where he was replaced by former Notre Dame coach Ara Parseghian).

In retirement, Broyles was accused by many fans of sticking his nose into the football teams too much. None of the coaches (Holtz, Ken Hatfield, Danny Ford or Houston Nutt) ever said Broyles tried to call plays.

He did analyze the program from a perspective of having been one of the best coaches in the country.

And setting the goal of winning at a high level.

Frank couldn’t stand losing. He died Monday having never looked at the film of the 1969 game against Texas. Yes, he was that disciplined.

In 1989, an SMU team coming off the death penalty and not very good came teetering into War Memorial Stadium not even close to having a win.

By halftime the Mustangs were making it uncomfortably close. Broyles and longtime aid Wilson Matthews were in the press box having simultaneous meltdowns.

Longtime running buddy Rex Nelson of the Arkansas Democrat-Gazette and I were together that day a few seats down from Broyles and Matthews.

“If they leave this box, I’m following them,” I told Nelson just before halftime. “It may be the first time a Razorback coach gets fired at halftime.”

Hatfield got things sorted out in the second half and Arkansas went on to a 38-24 win to set up a Cotton Bowl game with Tennessee and keep their No. 9 national ranking.

By the end of the game, Broyles had calmed down … a little. But that’s how he watched Arkansas games: As a great coach AND as a fan.

He also mastered the media, both when he was coaching and, later, as athletic director.

Publicly or privately he never acknowledged a story (there wasn’t any sports talk radio then and the TV stations, like now, were never, ever critical).

You literally could call him at the listed home phone number he had and, later, everybody in the country had his cell number. If he wasn’t on the golf course he would answer or return the call promptly.

When you got him on the phone, you better have plenty of paper and the pen better be working because you got enough in 15 minutes to write three columns. He didn’t care how critical you were of him in print … he always gave you the time.

“If you were critical, I thought the best way to get you on my side was talk to you and tell my side,” he told me years later. “I was going to do everything I could to help you understand my side.”

You usually ended up taking his side.

As an athletic director, Broyles could recruit players for any sport. Legendary track coach John McDonald and baseball coach Norm DeBryn would take potential Hogs to Broyles’ office. They were usually committed by the time they left.

“He was the greatest recruiter I ever saw,” DeBryn said. “When I would take a high school player by to see Coach Broyles, that player left ready to be a Razorback.”

Over the years, Broyles and I had our disagreements. He never acknowledged what you wrote. He never criticized you. He never called you to complain.

But you knew he knew.

He ran the athletic department like NFL teams do now in terms of public relations. He didn’t care if you were critical and he didn’t threaten to pull your credentials or access just because he didn’t like something you wrote.

“The worst thing in the world is if nobody cares and isn’t writing anything,” he told me once.

As usual, it was all about winning on the field. He knew finances were important, but winning was more important.

Over his 19 years as coach, the Hogs were No. 13 in winning percentage at 70.77 percent. That’s not the best percentage in school history, but Holtz (73.49 percent) and Hatfield (76 percent) only stayed seven and six years, respectively.

In the 1960’s, Broyles had the Hogs as the No. 3 program in the country behind only Alabama and Texas.

He learned something that could be applicable to the situation the Razorbacks find themselves in today.

While he always wanted to beat Texas, he knew a loss to the Longhorns wasn’t the end of the season. If that was the only loss, you were still in a great position if they stumbled against somebody else.

Like so many things he did, much of what he did as a coach and athletic director could be applied in any era.

Of course, the bottom line was winning.

And Broyles refused to accept any substitute.

Which, when you think about it, is the main thing missing from the athletic program since he stepped down as athletics director in 2007.

Just another thought from a coach who taught so many so much.