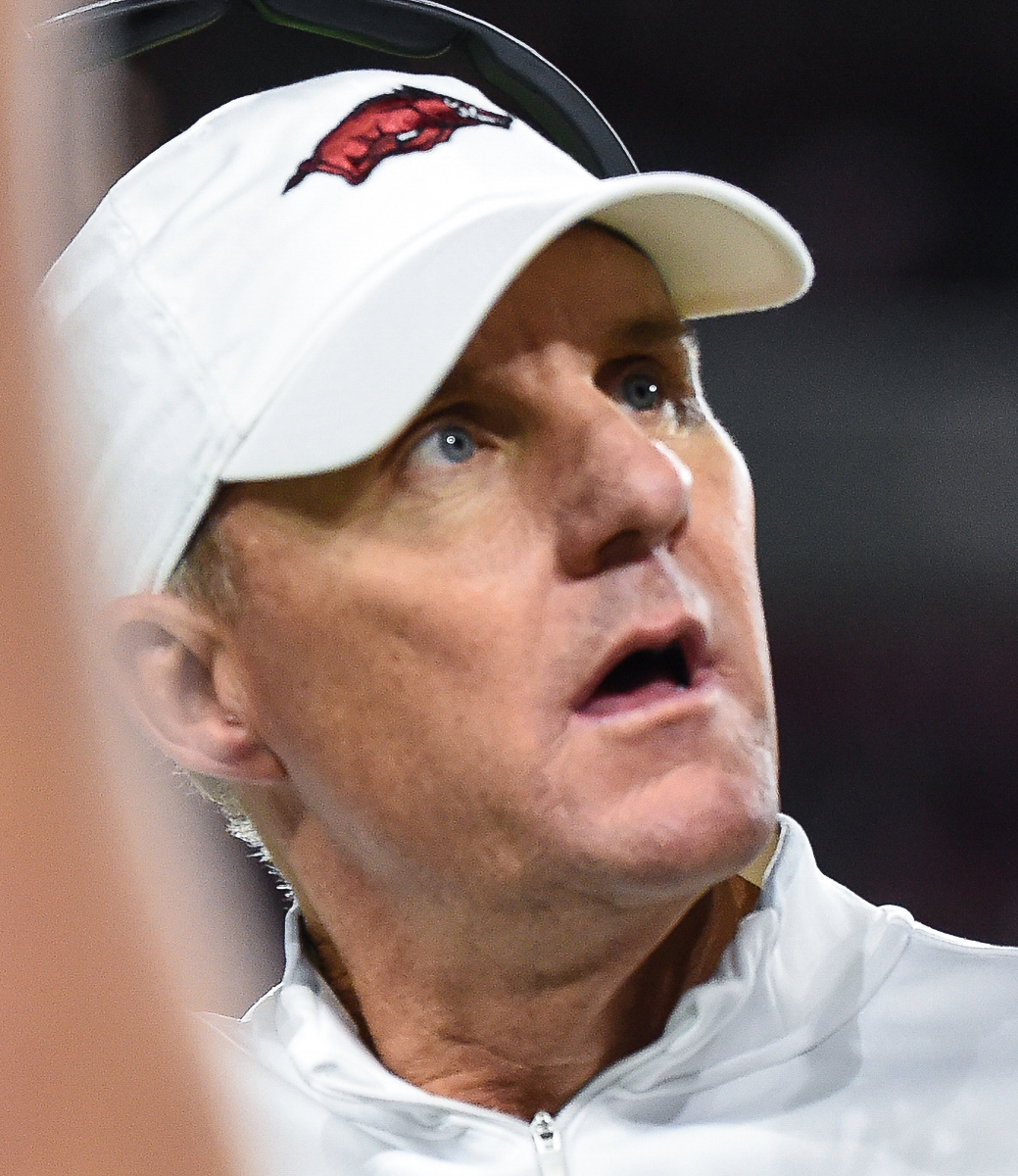 You probably can’t blame Chad Morris for being prophetic in December 2017 when he was hired and told everyone he was “just a high school coach.”

He didn’t add he was going to take a shot at turning Arkansas football into the best high school team in the country.

About every question since then he’s spent running laps around an answer that made any sense. That tends to happen with a lot of high school coaches.

Not at the big-time college level.

Some have said Morris convinced athletics director Hunter Yurachek he inherited a team full of players that hadn’t bought into the coaching change and he was going ot have to tear it down completely and rebuild it.

Well, tearing it down is the major accomplishment with a third of a season left in his second year. What is ripping it apart for most fans is he’s showing no signs of hope — or progress — for the future.

It could be said he doesn’t even follow what he says he’s looking for in who plays.

That has become increasingly apparent by playing only quarterbacks who are only consistent in being inconsistent. Meanwhile, Morris has kept the quarterback on the bench who got the team into the end zone the most in fall camp.

Now that August talk only sounds like the high school coach who talks nice in a press conference about the president of the school board’s son who he has no intention of playing.

By skillfully managing to keep an extra year of eligibility for an overwhelming number of freshmen, has Morris sacrificed wins now by selling hope to the fans as his plan?

I’ll be honest. I bought into what a lot of folks who have hired coaches in the past said about Morris being one of the best possible picks to coach here, despite having the only qualifying part of a resume being offensive coordinator at an ACC school.

Don’t talk about Clemson’s success since he left or SMU’s success now. There weren’t a lot of players left from his time at Clemson when the Tigers won the title in 2016 and none on last year’s national championship team.

Only 35 of the scholarship players Morris brought into the Mustangs are still on the roster that is now undefeated and ranked No. 15 in the country, but I’m not real sure how much credit Morris gets for that.

Meanwhile, Morris has taken a team that really should have been 5-7 (at worst) his first season and coached it to a 2-10 record.

This year he’s managed to take a team that should be sitting at 5-3 in a worst-case scenario and has them with a 2-6 record.

Worse, there is absolutely nothing tangible to indicate it’s going to get better.

Unless you want to take a lot of clichè-ridden answers at press conferences.

It was pointed out near the end of his little press gathering Wednesday indoors the Morris and Mississippi State coach Joe Moorhead are the two highest-rated coaches at CoachesHotSeat.com.

“You can’t control what other people say, and that’s the least of my worries,” he said. “My worries are making sure that this football team continues to get better every day.”

For a coach who is becoming more paranoid about anyone seeing anything, that’s about as good as it’s going to get. He once again said he wants to see these freshmen on the field. The coaches talk about the great things they see in practice.

Yet, players like running back A’Monte Spivey, tight end Hudson Henry and quarterback K.J. Jefferson haven’t seen the field and are assured of a redshirt season.

“Some of our younger guys, they’re just slowly learning the system and learning what we’re asking of them,” Morris said. “They’ve got some really good players ahead of them, so they’ve just got to wait their turn and be ready when that opportunity happens.”

Seriously. That’s what he said.

Let’s see now, Morris is publicly saying now he’s playing guys that are “really good” ahead of these freshmen who are really good and the future and he can’t beat San Jose State?

Like Spivey, who Morris said Wednesday “is electric with the ball in his hands.”

Fans have to take Morris’ word on it because none have seen him on the field.

But maybe the most disturbing dysfunction of Morris’ Razorbacks is the quarterback position where there has been zero development that anybody has seen.

“We’re getting guys kind of going through reps like we’ve been doing the last several weeks, so that’s kind of where we’re at with it,” Morris said about the quarterback position.

If that statement is true, he’s doing the same thing over and over and somehow expecting a different result. Most know what that’s defining.

If it’s not true, fans will make up their own minds.

Morris needs a win Saturday against the Bulldogs. Maybe more than in any one game in modern memory for a Razorback coach.

For some that won’t be enough. With three win possibilities left (State, Western Kentucky and Missouri), you would think Morris has to get at least two of them to have any shot at keeping his job.

But for others he’s already proven he’s exactly what he said he was when hired.