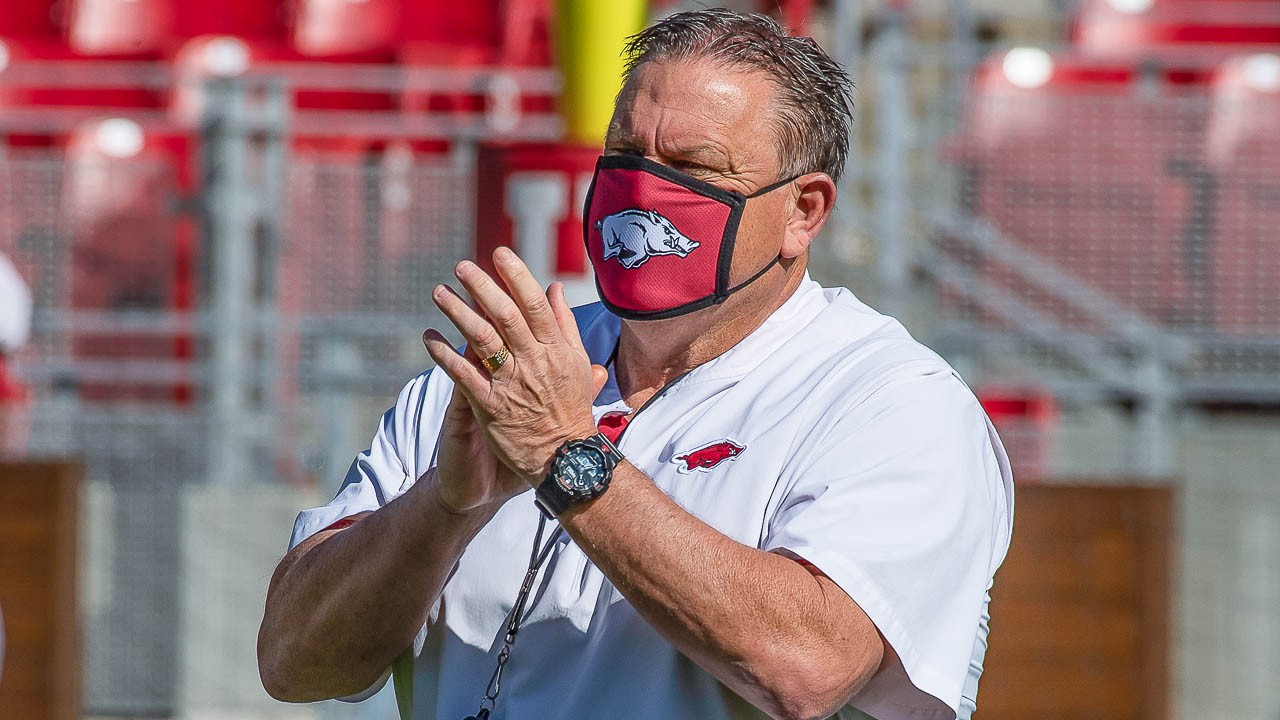 There usually aren’t many answers to be found in spring scrimmages and apparently Saturday’s practice inside Razorback Stadium was no exception.

Being open to the fans, though, brought out a decent number who came seeking hope.

For a program that has gone 7-34 the previous three seasons that’s about as much as fans can do in the spring.

Sam Pittman knows what needs fixing and is using his first spring practice to go about doing just that. He didn’t get one last year with the covid shutdown.

A lot of what he would like to do is figure out how the offense can stay on the field after a third-down play and the defense get off the field. It worked exactly opposite too often last year.

“It’s not just the offense, our defense wasn’t very good on third down last year, either,” Pittman said after the scrimmage. “We’ve made a big, big emphasis on third down.”

A big concern is giving KJ Jefferson time to make a decision, then him getting rid of the ball faster and getting it to a talented bunch of receivers.

RELATED:   Treylon Burks, Bumper Pool: What they saw in Hogs' blowout of UAPB

“Third down was our nemesis a little bit, getting off the field and staying on the field,” Pittman said. “Today I felt like the defense won that without really any question.”

Whether that’s good or bad is probably up for debate, but in today’s world if you want to compete for championships you do it by scoring points and getting a couple of key stops on third down.

Overall, though, Pittman got what he wanted out of the whole thing.

“It wasn’t a scrimmage that was dominated by one side,” he said. “As a head coach that’s a scrimmage you like.”

This entire spring is about getting a team ready for the season. Last year everybody was trying to figure it out until they could start getting players back on campus in the summer.

Probably a year behind, Pittman is trying to make this team more physical as much as anything.

“It’s a physical practice every day, and it will be again on Tuesday,” Pittman said. “There won’t be a lot of tapering off this spring, but on Tuesday I just want to get what we have corrected and play better fundamentals and be physical, and if we can do that then we will have had a great seven days.”

That starts with the run game on both sides of the ball. If you can run the ball and stop the run, things get easier.

“That’s been a big concentration for us,” Pittman said. “The bottom line is good teams they run the ball when they want to run the ball.

“That’s what it is, and the good teams stop the run when they want to stop the run, and they take half the game away from people.”

But the key is going to be how the quarterback spot develops and if they can figure out a way to give Jefferson time to make a decision.

“We have to move the quarterback … everybody knows that,” Pittman said. “The only way you can do that is get somebody back there around him. We knew that during the season as well.”

And they are getting bigger at running back with Dominique Johnson and true freshman Raheim Sanders hopefully able to add some wrinkles in protection schemes as well as running the ball.

Both are big backs that are completely different from Trelon Smith.

Sanders is the most intriguing of that duo.

“We moved him to running back day one,” Pittman said. “I don’t know that was necessarily the thought when we recruited him, but we need a big back.

“He is a couple of hundred pounds, a little bit more probably and we needed a little faster big back. We have Dominique, but we needed that so we went immediately there.”

About the only thing starting to really take shape right now as the Hogs get ready for Tuesday’s practice, then a spring break until resuming drills April 1 is Pittman is working on specific things.

Like being more physical and working on third down efficiency on both sides of the ball. They aren’t the only issues, but a couple of big ones.

And fixing them would help fulfill that hope for the fans.

That usually is tied to wins.