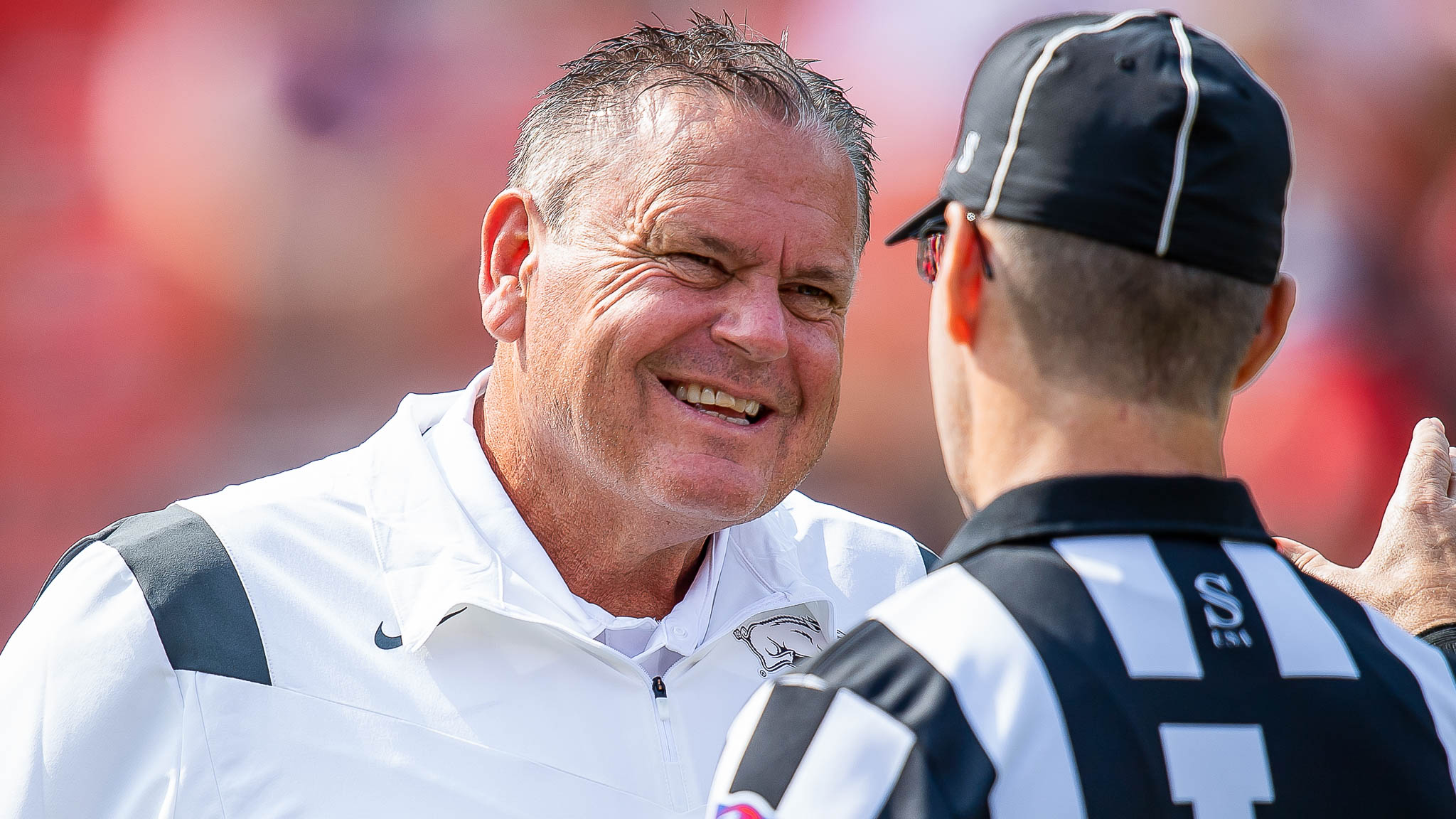 Bumps on the roads. If you grew up or ever spent any time in Arkansas you are familiar with the concept. No, I am not referring to the feeling of taking a trip down I-40 before heading south on Hwy. 71. I am talking about Razorback Football.

Well, in quick reflection, both are applicable.

We lost to Georgia in the national spotlight. And not only did we take an ‘L’, the score was worse than even the most skeptical predicted. It is why I refrained from writing possible BCS scenarios.

(Editor’s Note: Pete is the only one that missed the memo in 2012 there was a College Football Playoff starting in 2014 and since his sobriety is usually questionable around New Year’s Day he has kept missing the finer points)

Even in the best of seasons, losses will happen in the SEC — the conference is just too good, year in and year out. Like this past weekend, some of these hit so hard it will throw even the best bandwagon riders off the back in a hurry.

It is time for fans to pick up the pieces, move on, and relax as the future looks smooth, filled with games we can even handle on cruising speed.

I have no doubt Arkansas coach Sam Pittman, his staff and this team have made great the necessary repairs in preparation for a trip to face Ole Miss this Saturday.

Some worry a loss for the Hogs will expose us as has having some well-hidden wear already showing on the inside of the tires. But sit back and think about it for a realistic second.

A journey back to football prominence will take time, and Chad Morris left a mess when we told him to kick rocks. We are at least on the map now, and we have our compass pointed in the right direction.

We made a U-turn the night Arkansas athletics director Hunter Yurachek risked what many thought would be his job by hiring Pittman. This new coach in turn brought in a convoy of great coaches and quickly two notable recruiting classes.

Not bad for a program which had been pulling a motorcycle trailer with no tires, a busted axle, and the inability to get off a roundabout for almost a decade. Mix in the fact we have had no brakes and the weight of an Illini’s salary securely strapped down, you should be able to see how unexpected this turnaround has been.

With offensive coordinator Kendal Briles in the driver’s seat of the offense, we possess realistic expectations, not of perfect conditions, but at least of better opportunities to be competitive.

And things are handling great on the defensive side of the ball. No question defensive coordinator Barry Odom does not just have things looking good on the surface, but he obviously ripped out the potholes which had been detouring our recent defensive lacking.

Yes, we may be in the construction zone right now, but unlike traveling through Texas, we can actually see the positive end results ahead.

Oh, back to the game. “ESPN Gameday” will not be on-site to broadcast their thoughts an picks. Furthermore, there will be not be a soul from “SEC  Nation” making a trip down US 278 to be there.

All you will find in Oxford on Saturday will be two hard-nosed football teams battling to get a foothold in the conference race.

The road to the SEC West championship begins here.

One loss is one loss. A single failed attempt at victory is an expectation for even the SEC’s best teams (minus Alabama). Back-to-back losses by Arkansas could, however, loosen the lug nuts as the first step of the wheels coming off. The Hogs are fully aware they must avoid this potential disaster.

Defensive rebound. This looks like a take on a basketball victory, so to clarify, with the way Georgia ripped through our defense, no doubt Odom created some “motivating techniques” throughout this week’s practices along with schemes to stop the Rebels offense.

Our running game versus their defense. Arkansas’s overall defense is one of the top ten in the nation. Ole Miss’s? Not so much. The Rebels (67) allow 368.5 yards per game due to a whopping average of giving up 5 yards per play. If Arkansas quarterback KJ Jefferson and the backfield get good blocking from the offensive line, this will be a bad day for the Black Bears of Oxford.

Why Ole Miss will win:

Vaught-Hemingway. I would not say VHS is anywhere near an intimidating environment, but the Rebels fans are an excitable bunch. Not to mention if they get up be two scores, the constant, rhythmic public address of “First Down… Oooooole Miss” grates on ones nerves. Can Arkansas’s defense keep that and the other homefield chant (which shall remain nameless) at bay?

Matt Corral and Dontario “Different Strokes” Drummond. Respectively, the Mississippi signal caller and his favorite target at wide receiver simply click, and that can spell trouble for any defense. Let’s just hope Corral sees the Razorbacks defense as a no passing zone. [Okay, that was the last bad “road” reference.]

Anger. The Rebels looked more than favorable all season until they talked a bit too much before heading into Tuscaloosa and getting down 35 – 0 early. Now they feel they must earn back some respect. It’s at home, and it’s against a rival.

Did you see how mad Sam Pittman was on the sideline against Georgia? What do you bet he got grounded by Mrs. Pittman upon his return? I will admit without hesitation, the headphones toss was impressive.

The Hogs’ meteoric rise into the Top Ten ended as quickly as it began, yet losing to No. 2 was not as damaging as a potential loss to Ole Miss will be.

Lane Kiffin – Love him or hate him, you have to admit, he is the best in the country at one thing: being a candyass.

Ole Miss fans are like Razorbacks fans – many are outstanding, civil people willing to give you their last bite at a tailgate, while the most vocal have an innate capability to grind upon your last nerve via social media or in “Where’s Waldo” patterned shirt at a game.

“Nice prediction on the Georgia game, Mr. Bigshot writer,” says one random and aggressive personality … yeah, well, that was a typo (Editor’s note: No, it wasn’t)

Back-to-back 11 a.m. games? I will not have to update my game audio promo line.

This game brings to memory some glorious and even unusual victories over Ole Miss, including, but not limited to, the seven-overtime game in Oxford, the 4th-and-25 lateral and a Matt Jones slam dunk. Good times.

The Hogs are anxious to put last week in the rear-view mirror. They pull away in the third quarter. [I lied earlier.]

Word on the mean streets of Coal Hill is Andy has been running at the mouth because he gained a point or two on my early season picks’ lead. I would give him a lesson in talking trash, but I just don’t have the “heart man”.

(13) Arkansas at (17) Ole Miss – GAME OF THE WEEK: My once again choosing the Razorbacks as GOTW says nothing about bias; however, it speaks volumes in how much Pittman has increased the success of this team and program along with validating the toughness of Arkansas’s schedule. In case your Cliffs Note’ing this thing, I do not have much love for Lane Kiffin. Hogs by 17.

Vanderbilt at (20) Florida: Looking at the rankings and seeing Arkansas higher than Florida is almost like an out-of-body experience. I am so tempted to call this a potential upset, but they are playing in the Swamp. Gators by 24.

South Carolina at Tennessee: This may be a pretty good game based upon talent match-ups. Volunteers Head Coach Josh Heupel has Tennessee looking better this season. Homefield advantage for the win. Vols by 18.

(2) Georgia at (18) Auburn: I would like to say this will be a great game, but the Tigers are not playing their best ball. Georgia came onto the field solely to make a statement against Arkansas. Message received. Dogs by 27.

North Texas at Missouri: The Mean Green opened the season with a 44 – 14 bouncing of Northwestern State. Since then North Texas has looked like Vanderbilt. The Tigers won’t have any trouble moving to .500 at the midway point of the 2021 season. Missouri by 17.

LSU at (16) Kentucky: College football is very much an ebb and flow outside of the very top tier programs. LSU being down and Kentucky finally being ranked (as I thought they should be) are verifiable proof of that. The Wildcats may make program history.  Big Blue by 2.

(1) Alabama at Texas A&M: Like meeting your “soulmate” on a dating website and then meeting them in-person, this game lost its appeal in a hurry. Maybe the Aggies can keep it close to make the Hogs victory over them look better. Bama by 35.

Razorback Football is still in the fast lane. Buckle up.  And that is seriously the last bad play.