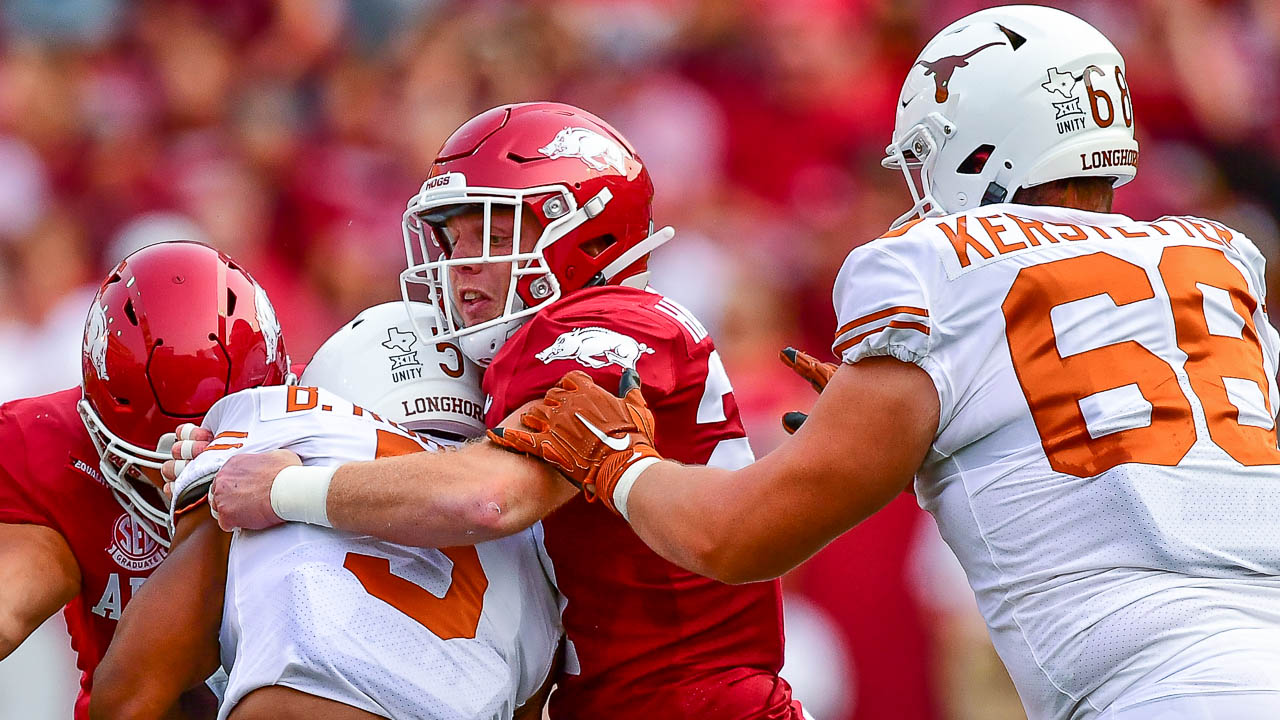 (Editor’s Note: We are not responsible for errors on minor typos in this or logic explanations. We haven’t figured it out, either)

Have you ever had writer’s block or even wondered the rationale behind its root cause?

Perhaps induced from pounding on the keypad about a spectacular occurence one day and then being required to put a bevy of thought into something far less engaging the next?

Perchance, in this case, the excitement and build-up of Arkansas hosting and upsetting a ranked Texas Longhorns team drained every last piece of usable vernacular in my brain. [Insert your best witty retort here.]

Chasing a discussion about the Texas versus Arkansas game with prose entailing our next opponent, Georgia Southern, seems like it should not be a daunting task.

Unfortunately, my thought processes are treating it like playing the Longhorns was similar to having the server at your favorite fine restaurant explain how the chef painstakingly prepares the duck à l’orange and closes the descriptive steps with an al bacio.

By comparison, facing the GSU Eagles this weekend equates to the young person taking your order at your favorite fast food restaurant explaining how Zachariah “is as cute as Denzel but still salts the fries better than Old McDonald himself” before wiping a speck of drool off their chin.

Enough of this hunger-inducing diatribe, and onward with a shortened assessment of this Saturday’s contest in Fayetteville.

Confidence. The Razorbacks have blown the stigma of losing wide open. Can we keep that motivation going? Absolutely.

The running game. If you think Texas had a hard time stopping our offensive line, and thus our backfield, just wait until you see how Georgia Southern fairs against our rushing attack.

Defense. This seems like a reoccurring theme from week to week dating back to last season; however, enough cannot be said about how greatly Barry Odom has turned around (through work ethic and scheme) the defense following the regime change subsequent to the dismissal of Chad Morris and … well, whichever terminology you want to use in reference to Morris’s strategy.

Why Georgia Southern will win:

Chad Lunsford. The head coach for the Eagles is a proven winner. He has led them to three straight bowl games coming into 2021. Two of those appearances ended in victory.

The running game. Yes, just as I mentioned it being a key for Arkansas, GSU we’ll have to rely upon their powerful rushing attack. How well their offensive line squares up against our defense at the line of scrimmage will be critical.

Play big and pull off the upset. GSU does have a history of playing strong against good competition. No doubt they will be amped up to come into Fayetteville hopeful to fulfill the roll of the victorious underdog against a No. 20 ranked team in Arkansas.

As mentioned, Arkansas is ranked in the Top 25 at No. 20 in the most major polls. Is anyone surprised it happened this early? Too soon perhaps?

The Eagles used to be a tough match-up for a lot of major Division 1 teams. Let’s hope it’s not a trap game for Arkansas as we have Texas A&M on the horizon.

My COVID diet has basically equated to my supersizing everything I order from Zachariah and the red, white, and yellow clown. Long live Bulkamania, Ronald.

I may end up regretting this: I feel like the Eagles will be no match for the Razorbacks on Saturday. There, despite trying to piece something unbiased together, I said it. This must be what Nick Saban felt like on Mercer week.

That last point said, I also once stated no singular athlete could ruin an entire football program. Unfortunately, I never considered the possibility of said hypothetical athlete being a volleyball player on the back of a motorcycle.

I have not disclosed this to Andy Hodges yet, but I am only going to check the tally every four weeks. I would tell you why, but in the twisted mind that is AH, he might find a way to use it against me.

By the way, did anyone not pick up on his prediction last week and how it relates to the Razorbacks’ history versus Texas?

(Editor’s Note: Andy Hodges checks the tally every week so the author will know … one way or the other.)

New Mexico at (7) Texas A&M: Even with their start quarterback Haynes King out until at least October, the Aggies will make short work of the Lobos… maybe. One thought in my mind is it will not be stiff competition for redshirt sophomore Zach Calzada, therefore he will not be as prepped for the Hogs the following weekend. A&M by 17.

Chattanooga at Kentucky: Pardon me, Cats…. but you should have made this homecoming. Yes, yes. Kentucky by 34.

Southeast Missouri State at Missouri: I bet the Tigers are glad to see one of their little brothers coming over for some backyard ball this week. Tigers by 28.

Tennessee Tech at Tennessee: Only the Vols can possibly screw this up. They will not, but I am not putting a dollar on this game. Rocky Top by 35.

(1) Alabama at (11) Florida – GAME OF THE WEEK: I wish I could remember which one of the talk show talents on our local ESPN radio affiliate made the comment so I could give him full props as I follow suit. “I am not picking against Alabama until someone beats Alabama.” Tide by 24.

Georgia Southern at Arkansas: The Razorbacks have more talent, more confidence, and are better coached. Hogs by 34.

Mississippi State at Memphis: Could this be an “upset” by the Tigers as some are predicting? Leach does not seem to have the Bulldogs playing their best ball. It is a tough choice (or perhaps I am overthinking). MSU by 7.

South Carolina at (2) Georgia: For the sake of not irritating my family in the Gamecock State [That is an acceptable nickname, correct?], I will keep this simple. Bulldogs by 29.

Central Michigan at LSU: Ah, good for you, Tigers. Good for you! No other comment is necessary. Enigmas are fun. Tigers by 30.

Tulane at (17) Ole Miss: UPSET (POSSIBILITY) ALERT: I am not saying it will happen, but I do not believe any of us will be surprised if it does. The Green Wave played Oklahoma close and made the Morgan State coaching staff inquire about early retirement. Ole Miss finds a way to walk through the Grove alive. Rebels by 3.

Stanford at Vanderbilt: What time does this game start? 8:00 PM Central? It might as well be 10:30 PM, because not many non-tree fans will be watching. Cardinal by 20.

That’s it! Have a safe and fun weekend everyone!

Let’s hope for the sake of Arkansas being Arkansas they do find the fact their opponent this weekend is Georgia Southern to be at least mildly engaging; otherwise, it will be the dollar menu for all Razorbacks fans again.