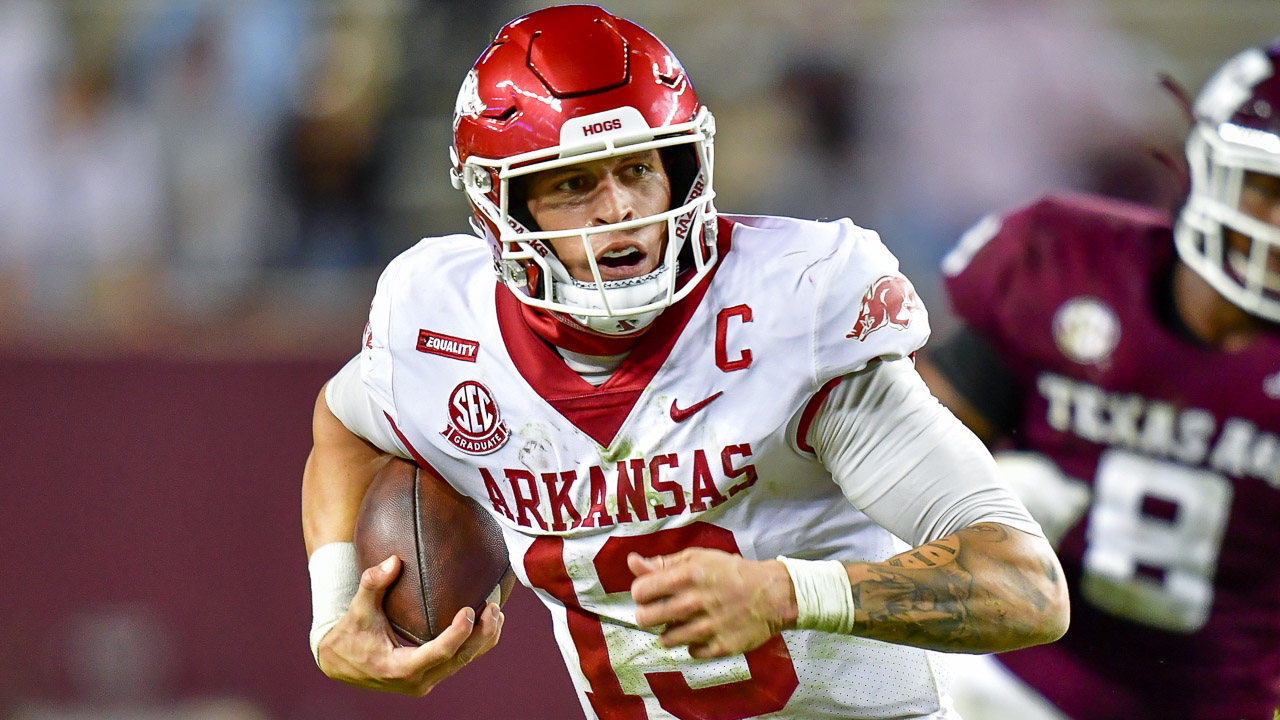 Things we know and things we may not. Respectively they either directly or indirectly guide us through life.

Every action we take in every aspect has bearing based upon our knowledge, experience, and awareness. The food we order at our favorite restaurant, relationships, and even which Gators cap we wear when attending a Bobby Petrino press conference.

For the record, and on a personal level, I know I have two of those down to perfection.

As Razorbacks fans, something we know is, as tough as it may be and as much as we do not want to, we have got to move on from the asterisk by the Auburn game.

We are 3–3 in 2020, which is better than many expected in Sam Pittman’s first season. What we may not know is our three victories have been over teams with current losing records.

We do know the Hogs showed some moxie by mounting a very impressive second half comeback (which included a shut-out) victory after trailing Tennessee 13–0 at halftime.

What we may not know is the Vols used three quarterbacks in the second half to find some hint of a weakness in our defense.

However, what we do know, is in their losses against three currently ranked opponents, Arkansas has played well, even worrying Georgia by going into halftime with a 7 – 5 lead.

We do know this week we face sixth-ranked Florida in Ben Hill “Peter” Griffin Stadium, which some of you may also know solely as “The Swamp.”

What we may not know is Razorbacks quarterback Feleipe Franks has a love-hate relationship with the Florida fans, and while they will no doubt cheer against his team pulling an upset, there has been discussion on how those in minimal attendance will vocally receive the former Gator who some credit as turning around the program when Florida was struggling to obtain SEC East glory.

Some may also know the Gators faced a Top 5 Georgia Bulldog team last week and somewhat put an unexpected show of confidence and execution on a highly touted Georgia defense.

What some may not know is the Bulldogs were depleted (especially in their secondary) by injury, so there is zero doubt this did impact the final score of the game, but how much?

We know Florida quarterback Kyle Trask is the real deal, and he proved that at some party they held last week Jacksonville.

What we may not know is his tight end Kyle Pitts may not be able to play due to a concussion and whether or not his backup, Kemore Gamble, will be able to fill the role in a capacity which continues to take pressure off Trask.

We know Sam Pittman tested positive for Covid multiple times and will not be in attendance Saturday.

What we don’t know is from where he contracted the virus, although with as much as he interacted with the Tennessee players after the victory on Saturday, my guess is many of those fans donning cardinal and white were immediately worried about the possibility of what has now come to fruition.

If this doesn’t make sense to you, please feel free to ask for clarity. Hint: say hello from a distance. No offense, Coach. We love ya.

Feliepe Franks knows this Gator team. He knows their strength and weaknesses. And he knows Treylon Burks.

Kendal Briles has the offense on a roll. Faith is he has them prepared for Florida, but the offensive line may be an exposed weakness against a decent Gator defense.

Barry Odom will assume head coaching duties Saturday. Something tells me he will have the players motivated to play for him as media naysayers have repeatedly given Florida a pass for this week.

Why Florida will win:

Their defense has stepped up as of late, especially on third downs.

Kyle Trask. He’s good. He’s very good. Is he better than Franks – remembering the latter lost his job as QB1 after injury?  The answer may be played out in Gainesville.

Their offense is good at getting first downs, while Arkansas’s defense has struggled as of late getting stops on latter downs, even third and long.

As Andy Hodges mentioned in a recent piece, Arkansas should never mess with their traditional logo. Whether it’s the gator or the retro ‘F’, Florida just needs a new emblem all around.

The Razorbacks will be ready to play. Mark my words … unless I am wrong, then forget I mentioned it.

Apparently some may not know how betting lines work. I had a very, very recent conversation in which I was on the receiving end of the following: “Hey, I read somewhere Arkansas is 6–0 against the spread this year. I thought we had lost three, and I didn’t think Tennessee ran the spread.”

It’s always stated, but we have to establish a strong rushing game.

The word “moxie” is highly overused. So are “dedication”, “loyalty”, and “compassion”, but their actions and expectations should not be.

Next week is Week 12 … hopefully. Especially for me.

Florida is too strong at home, and unless Arkansas can show up with a “win one for the Gipper” attitude, we are most likely going to leave the Sunshine State with an L.

Be certain to listen to the game Saturday at 6:30 p.m. via HitThatLine.com, and on the air at ESPN Arkansas 95.3 in the River Valley, 96.3 in Hot Springs and 104.3 in Harrison-Mountain Home.

I do know Andy seems to have his ducks in a row this season holding a two-game lead. The competition has passed its mid-point, but what he may not realize is this is not over yet.

Vanderbilt at Kentucky: Earlier this season I predicted the Commodores will not win a game all season. Looking at their schedule they still possess three (albeit slight) possibilities of earning a victory. The Wildcats are one of the remaining opponents for which Vanderbilt fans have a glimmer of hope. Sadly, for the Commodores, this game will be played in Lexington. For them and the rest of their season, the question becomes how much pride will the Commodore players will be able to carry out of Kroger Field? Paper or plastic? Kentucky by 12 … or 13.

Arkansas at (6) Florida [GAME OF THE WEEK]: Yes, despite CBS picking up the South Carolina at Ole Miss, this is by far the most interesting match-up this week. Unfortunately it’s still a bit of a mismatch. Gators by 10.

South Carolina at Ole Miss: While both of these 2 – 4 teams had higher expectations coming into this season, neither expected to set the SEC on fire.  CBS has this game, so both programs will get some national exposure to help with their rebuilding. Rebuilding you ask? Ole Miss has their new coach in Lane Kiffin who is trying to build up the program, while South Carolina is in its final days with Will Muschamp, and whomever the future coach of the Gamecocks is, they will have to start a rebuild once the clock hits all zeros in the last game of the season. Homefield is the determining factor. Rebels by 7.

(12) Georgia at Missouri; (5) Texas A&M at Tennessee, (24) Auburn at Mississippi State; and (1) Alabama at LSU are all postponed. My guess is the Volunteers are the most thankful in mid-November.

Last current piece of knowledge: no matter what happens in this game against Florida, at least it feels good to know we have Chad Morris in the rearview mirror.