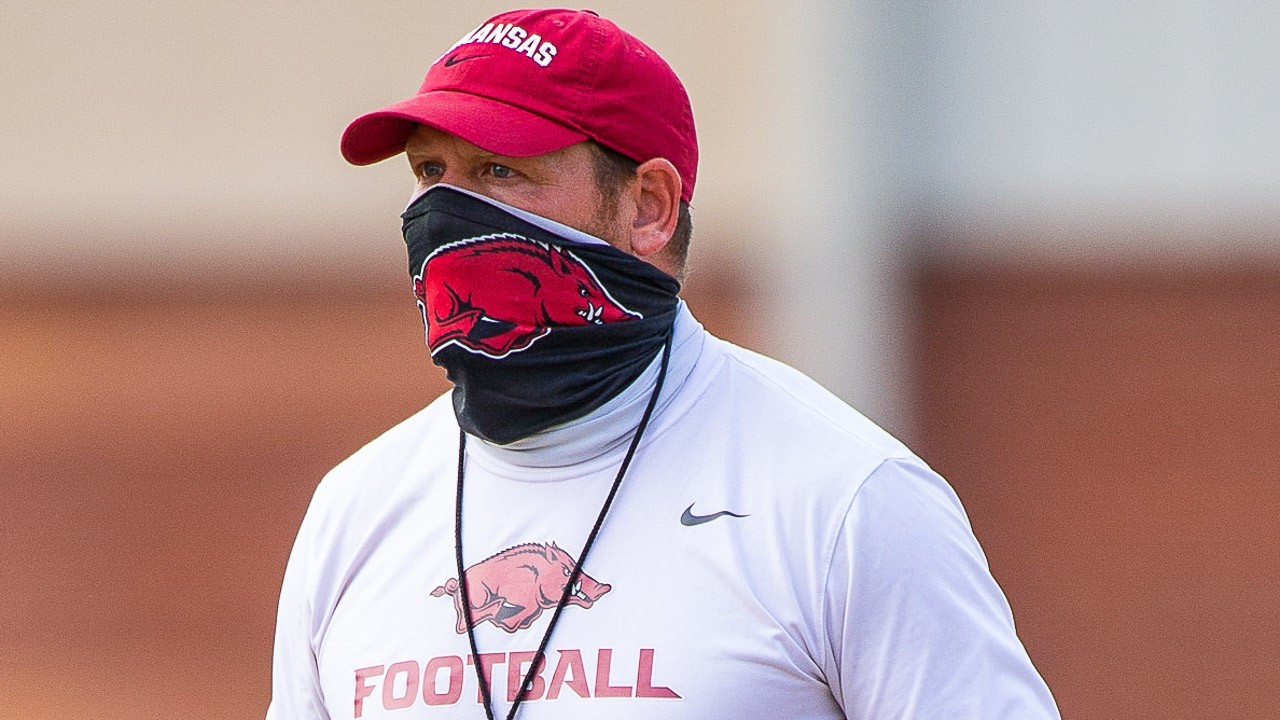 Bye. It’s a funny word, isn’t it? Related to sports it is said to derive from cricket when a runner scores on a ball missed by the wicket-keeper. Basically, you get to advance without actually doing anything.

As it pertains to saying farewell, it comes from the contraction of “Godbwye” meaning “God be with ye.” Sometimes such an anticipated dreadful word this “bye”.

Wait, why am I leading off with this? To show off my “Google” prowess?

No, it’s because I temporarily forgot Arkansas is coming off a bye week in their all-SEC season. So is Week Nine’s opponent and home team, the Texas A&M Aggies. Both sides feel as though they have ample time to prepare.

Arkansas coach Sam Pittman no doubt has been focusing on fundamentals and conditioning. Aggie quarterback Kellen Mond was quick to point out he is not scared by the Razorback defense.

And A&M’s head coach heaped praise unto Arkansas but also stated nothing has changed in their preparations for playing the Razorbacks.

Why should it? The Aggies are playing well coming off a convincing victory over a Top 10 Florida team prior to the A&M bye week.

Pittman was asked if the game against Texas A&M is a rivalry. Judging by his response, there seems to be a little more electricity around the practice fields on The Hill this week.

One has to wonder if the Aggies feel the same way, yet we all know you would never get a team out of Texas to admit they do not like the Razorbacks.

Okay, I am short of constructive thoughts this week, so let’s hit the obviously well thought out opinions of a man who was recently startled by a rose leaf and stem in the dark and will forever be deemed an October scaredy cat … It was very dark, and venomous snakes are known to run rampant in these parts.

The defense will face a new type of challenge, but Barry Odom does not seem like a “one-scheme” for all situations kind of guy.

No doubt he, his staff, and defensive unit have sat through hours of game film in preparation for the trip to Kyle Field.

The offense is getting better, and they are playing with an extreme amount of confidence created by talent in the skill positions.

The receivers are getting open, quarterback Felipe Franks is progressing through his reads (although I sometimes wish he would not hold onto the ball nearly as long), and the running backs are presenting a valve for when the opposing coverage is fully doing its job.

Because they care. They have passion. They make winning a priority.

Who doesn’t want to be surrounded by people with those characteristics?

Why Texas A&M will win:

The Aggie offensive line protects the quarterback only giving up one sack all season, and, granted, a lot of that may have to do with quarterback Kellen Mond’s ability to get rid of the football.

Running back Isaiah Spiller is the second leading rusher per game in the SEC and first in yards per carry.

Outside of Georgia, the Aggies offense may be the first one Arkansas has faced all season with both a strong running and passing games.

A&M’s offense averages 250 passing yards per game along with 172 rushing. The aforementioned Bulldogs are slightly above and under those marks respectively.

Odom’s defense may not have the luxury of being as drop-back heavy as it has in previous weeks.

Give Pittman credit, this guy has some of the coolest lines ever from a head coach.

We already loved his demand to turn up the jukebox, and his reply to a question regarding whether people had heard of Hudson Clark was priceless: “Well, they’ve heard of him now. Three times at least.”

Arkansas’s offense does not throw up big numbers in relation to the rest of the SEC. I do feel like Kendal Briles is by far going in the right direction.

I expect big things from him as this and future seasons progress.

Does anyone else have a love/hate relationship with Fisher? Sometimes I respect what the guy has accomplished. Other times I just want to see him fall flat on his face.

Arkansas has a strong tendency to lose to A&M by a single score. They do have momentum, enthusiasm, and confidence on their side. They flip the coin this weekend and say goodBYE to the losing streak against the Aggies.

Be certain to listen to the game Saturday at 6:30 p.m. via HitThatLine.com, and on the air at ESPN Arkansas 95.3 in the River Valley, 96.3 in Hot Springs and 104.3 in Harrison-Mountain Home.

The pregame shows start at 1:30 p.m. with Tye Richardson and Tommy Craft.

Andy doesn’t know it, but I gave him a few freebies just to keep it interesting. Plus it’s never a good idea to dominate the boss in any job-related competition.

(5) Georgia at Kentucky: Kentucky is like a bi-polar girlfriend – on again, off again – so you never fully know how to predict their performance. However, this week they play Georgia, and the Bulldogs are far too talented for even the Wildcats on a high. Georgia by 18.

LSU at Auburn [GAME OF THE WEEK]: This is another one of those scenarios we have encountered which few of us would have fully predicted. We all knew LSU would be down from last year, and we also knew Auburn was overrated; however, let those among us who forecasted both being out of the Top 25 cast the first bragging right. Granted, the entire nation knows Auburn has been gifted two victories by SEC officiating, so no doubt that weighs into the minds of voters. Furthermore, Auburn coach Gus Malzahn is allegedly wearing padded trousers to minimize the burning sensation coming from his chair, and the pressure this weekend may force him into bad decisions. This one is a toss-up, and I am going with LSU. Bengal Tigers by 3.

Ole Miss at Vanderbilt: Someone wins a game this weekend… Unfortunately for the Commodores it won’t be their first one of the season. Translate that however you like, but allow me to clarify: Vandy may not win a game all season, and I dislike this because I am actually a small fan for the Commodores. Rebels by 27.

Mississippi State at (2) Alabama: Mississippi State started the year off with a bang, and since the upset of LSU, it’s been all downhill. I almost hate it because it diminishes how well Arkansas did against them in Week 5. Alabama is the only undefeated SEC team, and there will be no change to that this weekend. Nick Saban calls the dogs off late in the third. Too cliché? Tide by 24.

Missouri at (10) Florida: Second and Third in the East square off with the Tigers enjoying a two-game winning streak, and Florida fresh off a postponed game with LSU preceded by a surprising loss at Texas A&M. Missouri is coming along, but not fast enough to defeat a better Florida team. Gators by 14.

My readers are the best. Happy Halloween (or whatever fall activities you enjoy). Here’s to never saying bye. God Bless you all.