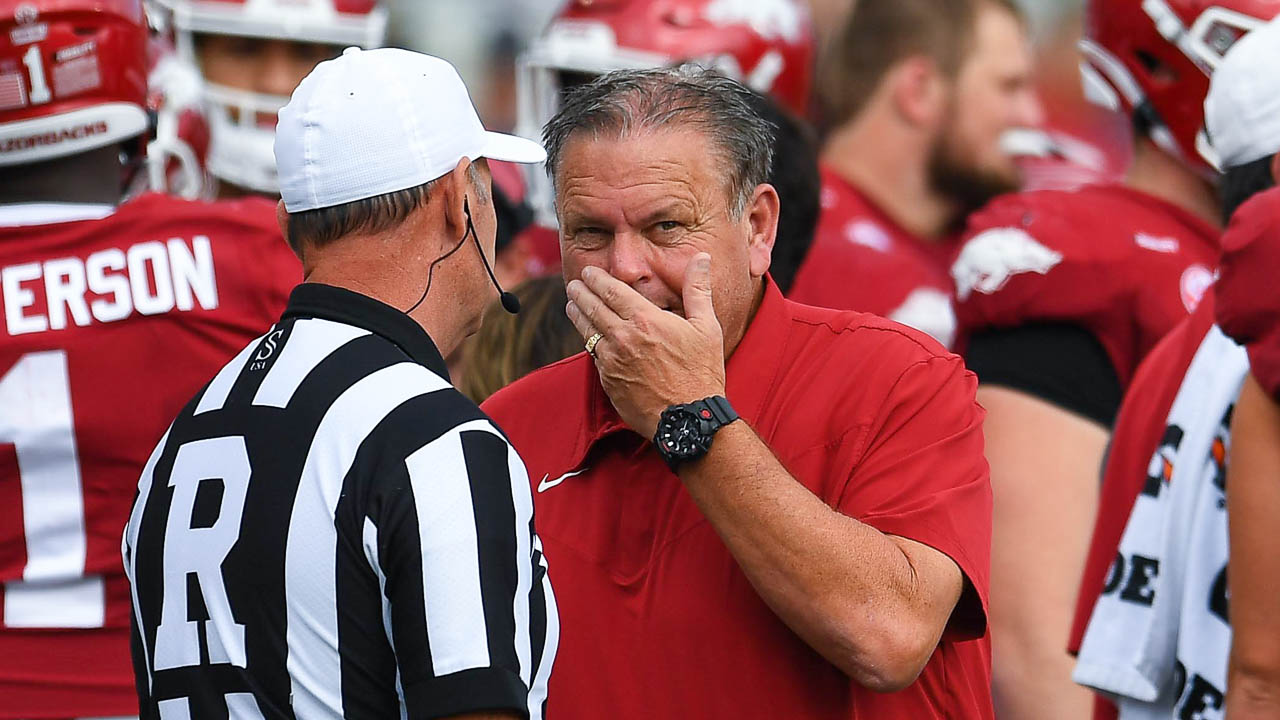 There’s a cliché about the difference a singular day can make. In Arkansas sports, like the changing of our weather, you should stick around for a week.

Early last Saturday the talks about where Arkansas might land in a bowl game gave a small variety of answers. Factors included Georgia looking to be in control of the SEC and Alabama a lock for the Sugar Bowl to cap of the 2021 season.

Thus many predicted the Razorbacks to end up somewhere between the Gator and the Duke’s Mayonnaise bowls. Most fans would prefer to “hold the latter, please.”

Yet Saturday had more games on the slate, and two conference championship games quickly changed the landscape. SEC Championship regular Alabama “upset” Georgia while in the Big Twelve, Baylor knocked Oklahoma State out of playoff contention.

While attending a public vendor venue I heard many people discuss hopes of the Citrus Bowl, the Gator Bowl, the Outback Bowl, and even the Taxslayer Bowl.

Then speculation of opponents was a natural transition in the conversations. Wisconsin, Penn State, Wake Forest, and Purdue were the main mentions for our pending opponent.

I asked one very young man whose loyalty to Arkansas I noticed was unwaivering despite pressure from a relative to state he is a Sooners fan. This boss of a kid, Elijah, showed no mercy when asked who he thinks the Razorbacks will play in a bowl game.

“It doesn’t matter who we play; we are going to win.”

I for one am forever an Elijah fan. He exhibits the happiness and joy of being a Hogs fan many of us have not been able to display in a very long time.

Then Selection Sunday finally rolled around. Arkansas’s destination and opponent (as you are probably already aware) were announced to be the Outback Bowl versus the Penn State Nittany Lions.

WarMachine: “I got a guy in my mentions freaking out we won’t get respect for beating Penn State since (in his eyes) they shouldn’t even be in the Outback Bowl, even though a win gets Arkansas in the Top 20. Also, others acting like hoops is 0-9 and not 9-0. The internet is exhausting.”

uglyunclez: “I actually hate this matchup. I do not like Penn State, and I despise their coach. The thought of losing to these guys is too much. It makes me already have a bad feeling about this game.”

Dr. Amazing: “Never Forget, when Long fired Bobby P, [Penn State coach James] Franklin laughed saying he “would never consider going to Arkansas” under any circumstances… no one asked him.

I wanted us to get them in a bowl, am so glad we did.”

Mixed reactions it seemed. Who knew so many of us have not forgotten about Franklin and his past actions despite having no direct line to Arkansas. I agree.

Other news on our small part of the world included star wide receiver and top NFL prospect Treylon Burks (respectfully) opting out of the bowl game to focus upon his physical health as the NFL draft draws near.

A very large majority of Arkansas fans put what Burks has done for our program and our state alongside what his best for him into perspective and publicly declared our support and love for him.

Scott of LR: “Thank you for choosing to be a Razorback and representing our state with pride! Go do you!”

Arkiegirl-Patty: “For all y’all in your feelings! So you realize [Burks] has been hurt since he was shoved out of bounds in the Alabama game and still busted his ass off for the team. It’s his time to get his body healthy to prepare for his future.”

Chris in AR: “While I would love to see you help us take down Penn State, I can also understand your decision. We support you, Treylon! Thank you for representing Razorback Nation and the state of Arkansas with class, character and courage. You’ll always have our gratitude and support! Go Hogs!”

Treylon, you will always have us backing you no matter what. We noticed your sacrifices, playing through injuries, and dedication to our state and its people. Thanks for being a huge part of what has brought pride back to our program.

We all love Sam Pittman, and we appreciate and respect his decisions in our program. Coming into the week his career representation had been Judy Henry of Little Rock law firm Wright Lindsey Jennings.

News of Pittman hiring Jimmy Sexton as an agent brought back memories of contract negotiations of Razorback coaches and potential coaches of years past. Bad memories.

Maybe Pittman didn’t know his fan base’s thoughts on Sexton. Maybe Pittman’s loyalty and dedication to our program created no need of concern in his mind. Perhaps (and you may want to sit down for this one) it’s just Coach Pittman’s best move.

Here are a few of your reactions:

Matt: “Can we not just ban Jimmy Sexton from ever representing any Arkansas coach? And it also makes Sam Pittman’s whole “awww shucks” routine seem dirty now. There was no way Hunter wasn’t going to give that man the moon. Jimmy is bad business in Arkansas.”

Jason: “His previous agent was more of a local lawyer.”

ArkansasGirl-Patty: “Does anyone even think that maybe the lawyer might be in mutual agreement, and that’s why Pittman had to get an agent? Geez, we let things that are none of our business get all in our feelings.”

Pittman has given us his statement he is never leaving Arkansas:

“I don’t want my loyalty to the university to be tested. I’ve said that I would never leave the University of Arkansas, and I’m not going to. Getting an agent doesn’t mean that I’m leaving. Getting a new agent has nothing to do with that.”

I for one have always taken Coach at his word. I have no reason to stop now.

So what a week it has been, right, Razorbacks fans? I didn’t even mention top OU wife receiver Jadon Hadelwood’s transfer to Arkansas.

Hey, it’s after Thanksgiving, we are still talking football, we have a January 1 bowl game, and we are excited about the Arkansas Football program, its coaches, players, and future again.

All kidding aside despite the earlier weather reference; thoughts and Prayers to all affected by the storms and tornadoes last night throughout the surrounding states.